Halloween Haunts: Wicca is Alive and Well in Cleveland by Katherine Kerestman

Park your broomsticks on Broadview Road in the artsy, ethnic, and eclectic Old Brooklyn neighborhood of

Cleveland, Ohio, and visit the Buckland Museum of Witchcraft and Magick, where museum owner Steven Intermill will tell you about the cache of artefacts collected by the founder of American Wicca, Raymond Buckland. Born in England to a family of Romani heritage and occultist leanings, Raymond Buckland had studied Wicca there under Gerald Gardner (1884 – 1964), the father of modern Wicca. Buckland collected occult objects, which were first housed in a New York City museum in his own basement from 1966 – 1976, and then moved to New Hampshire, New Orleans, and eventually Ohio, where Buckland settled at the end of his life. Now they are housed in this Cleveland museum.

Buckland’s own spiritual journey coincided with the revival of the Old Religion in England, which was highly publicized through the efforts of Gerald Gardner. With the 1951 repeal of the Witchcraft Act of 1735, the practice of witchcraft became legal in England, and Gardner proclaimed a resurgence of the ancient, nature-based Old Religion known as Witchcraft or Wicca, terms he used interchangeably to betoken the age-old concept of Wise Ones, who knew the secrets of healing and protection. Along with anthropologist Margaret Murray (author of The Witch-Cult in Western Europe, 1921), Garder explained that although the Old Religion dating from Paleolithic times had been forced into hiding by the establishment of Christianity as a state religion, it had never disappeared. He claimed that ancient Wicca harkened back to the horned gods and fertility goddesses of the Stone Age peoples.

In 1962 at the age of twenty-eight, Buckland moved to the United States. Deciding to become a Wiccan, he went to Perth, Scotland to be initiated into the Craft by Monique Wilson, High Priestess in Gardner’s coven. When Buckland returned to the United States, he brought Wicca with him. His wife Rosemary was initiated into Wicca, and together they started a coven in Long Island. In 1964 Buckland began to accumulate artefacts for a witchcraft museum. Museum owner Steven Intermill told us they had recently celebrated Buckland’s feast day, the second anniversary of his passing to the Summerland.

Buckland distinguished between the terms Wicca and Witchcraft – the first he used to refer to the worship of gods and goddesses of the ancient nature-based Old Religion; the second he used to refer to the ceremonial magicians whose focus is on the casting of spells. Buckland was a prolific author, publishing over sixty works on Wicca and Witchcraft, and he frequently expounded upon his spiritual views in television and print periodical interviews. In 1986 he published Buckland’s Complete Book of Witchcraft, a sort of “Witchcraft 101” textbook, which explains the underlying concepts of Wicca and the worship of the Lord and Lady, the male and female principles in the natural world. His “Big Blue Book,” as it is usually called, has been in print ever since, and is considered a classic in the genre.

I purchased a copy of Buckland’s “Big Blue Book” in the museum gift shop, where I perused the wares with the two friends who had accompanied me on this expedition whereby we inaugurated the macabre festivities of the merry month of October. In addition to a large selection of occult literature, both fiction and non-fiction, the shop features runes, crystals, tarot, poppets, wands, candles, and dream-catchers.

Buckland’s purple ceremonial robe is displayed in a showcase visible from the entrance into the museum. In a case to the left of the robe is Buckland’s ceremonial horned helmet, which he fashioned from a hardware store cooking pot and toy animal horns. (Intermill explained that objects are more powerful when crafted by yourself and infused with your own magick). The silver crescent moon headdress worn by High Priestess Rosemary (Lady Rowan)

Buckland is there. A green spiral-bound notebook contains Buckland’s hand-written draft of his Complete Book of Witchcraft.

Suspended from the ceiling is a well-used broom. I asked Intermill how many miles were on the broom, and he replied, “A lot – it’s been around the world.” I noticed a shadow-box containing a doll-size outfit consisting of a shawl, a blouse, and a red skirt with white polka dots. Intermill told us that his mother had said she had a special gift for him to display in his museum (causing him some concern as to the appropriateness of her contribution). He continued by saying that he had been pleasantly surprised when she presented him with this representation of the Swedish Paskarringar (Easter Witch) tradition, wherein little girls dress up in witch ensembles of scarves and oversized skirts and shawls to seek treats from their neighbors (as American children do at Halloween). The tradition had evolved from an old legend that annually on Holy Thursday witches would fly on their broomsticks to attend a witches’ convention, and when the sorcerers returned to Sweden they would find the people had prepared bonfires to make them think twice about landing there. Bonfires are still lit on Maundy Thursday in Sweden. 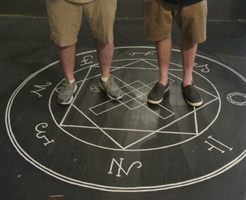 A white magic circle is painted on the black floor, with mysterious occult symbols and other glyphs signifying the four cardinal directions. It was painted by a member of the Art Department at New York University. Intermill told use that one day he was standing in the circle and joking with friends about Beelzebub and flies, after which he was beset by a veritable plague of flies for a period. Subsequent to that experience, he allows no jesting in the circle and counsels caution within its circumference.

On the wall is a collection of William Mortensen’s Witches, on loan from the New York City Stephen Romano Gallery. Mortensen developed the art of photo-shopping when he was working with film in silent-movie era Hollywood. He earned a scandalous reputation for himself through his pursuits of his two predilections – macabre art and his paramour Fay Wray. Beautiful witches, hags, and wizards — in various shades of black and white and stages of undress – fly over conical medieval towers on broomsticks or skulk amid eerie paraphernalia in gothic settings.

Brass Chinese Zodiac symbols hang on a wall near the necromantic wand of Aleister  Crowley, a colorful occultist contemporary of Gerald Gardner who proclaimed himself messiah of the Nu Aeon and antichrist. A Beatles Sergeant Pepper’s Lonely Hearts Club Band album cover is exhibited: among the faces pictured in the crowd are Aleister Crowley and Edgar Allen Poe.

The head of a long-horned, long-bearded black goat is mounted on the wall in an area featuring psychedelic Age of Aquarius articles from the late 1960’s and early 1970’s, when divination and Zodiac parlor games were popular among people of all ages. Ouija boards, tarot cards, and children’s toys with magic eight-balls are displayed with day-glo fluorescent paintings and black lighting. I asked Intermill whether the sofa in that area had some significance (it is of the same time period), and he told me that it is for spouses who are not “into” the magick and who are waiting for their better halves to finish looking at the museum.

Black mirrors for scrying the future or contacting spirits are scattered throughout the museum, as well as athenes (ceremonial blades). A two hundred-year-old mandrake root is there, carven into a female fertility image. A brass box bound with a cord is in a case – it contains a demon trapped by Buckland, who came to the aid of a friend who had mistakenly called the demon forth and who could not send it back. A placard warns not to say the demon’s name, lest it become active once more.

Taking leave of the museum and Mr. Intermill, we crossed the street to eat at Lucy’s Ethiopian Restaurant.  We sampled a sweet, but by no means cloying, Ethiopian honey wine and traditional dishes of potatoes and carrots and lentils, which were served on platter-size circles of spongey bread. Instead of using utensils to carry the savory morsels to our mouths, we were instructed to scoop up the food with the bread. After we finished our delicious meal, the server brought a wrought-iron pan of smoking coffee beans, roasting them right at the table, and a bowl of sweetened popcorn. The server returned to take the beans to the kitchen and prepare the coffee. Ethiopian coffee is rich and dark, but not bitter. At Lucy, it is served in a traditional round-bottomed clay vessel with a thin neck. The coffee is poured into demitasse cups. Incense is included on the rattan tray with the coffee, sugar, creamer and demitasse cups and spoons. Diners can replenish the incense in the burner as it burns off.

The Halloween season was off to a great start: we compadres had plans to convene again in a couple of weeks at Lawnfield, the Mentor, Ohio home of President James A. Garfield, for a tour of the house and for a performance by an Edgar Allen Poe interpreter presenting Hop Frog and The Raven. ‘Tis the season.

Once upon a time, Katherine Kerestman had just embarked upon further studies in literature — when a bite of an apple poisoned with pragmatism brought about a career shift which threatened to doom her artistic spirit. Lo 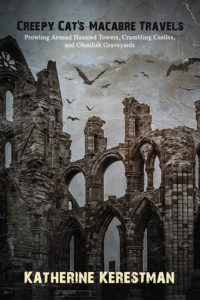 nging to romp in gothic ruins, crumbling castles, and claustrophobic Puritan and Shirley Jackson-esque villages, she began to write down her dreams, and suddenly they became stories. She spent the next year writing her first book — Creepy Cat’s Macabre Travels: Prowling around Haunted Towers, Crumbling Castles, and Ghoulish Graveyard, a nonfiction literary- and historically-oriented travel memoir that placed on the Preliminary Ballot for the 2020 Bram Stoker Awards, in the nonfiction category. Other publications include “Markovia,” (in S. T. Joshi’s Penumbra No. 2, August 2021); “To Necrophilia,” (in the Horror Writers Association Poetry Showcase, Vol. 8); “Lenore,” (in Mensa Bulletin, October 2021); “A Gothic Heroine in Her Ancestral Manor” (in Our Shadowed Past, ed. Bob Issel, October 2021); “Breaking the Shackles of the Great Chain of Being and Liberating Compassion in the Eighteenth Century” (in the journal 1650-1850: Ideas, Aesthetics, and Inquiries in the Early Modern Era); and various movie and book reviews in forums such as Buddy Hollywood (online blog) and Voices (the newsletter for the Dracula Society). Several additional works are pending publication in the near future.

She is educated in English and History, with a B.A. from John Carroll University, and an M.A. from Case Western Reserve University. She is a member of the Jane Austen Society of North America, Mensa, the Horror Writers Association and the Dracula Society, and is wild about Dark Shadows. She loves to travel, especially to places with macabre associations. She can be found frolicking in the cemeteries of Salem most Halloween nights.  You can find out more about her at www.creepycatlair.com.