Halloween Haunts: Why Do We Like Being Scared? by Marlena Frank

When I was little, my father used to have a creepy rubber mask that he wore every Halloween. It wasn’t a monster mask or a werewolf mask or anything like that, it was just a creepy looking guy’s face. He wore it with a tan, nondescript jacket with a hood that he tightened around the mask to make it look real. When it got near Halloween, he would put it on and chase me and my sisters around the house, and we would all three squeal and run, having an absolute blast. Then when he got tired, he would take it off with a laugh and the game would be done.

Sure, we would plead with him to put it on again and chase us, but that was a rare treat.

On Halloween night as we went from door to door getting candy, dressed as the Penguin from Batman Returns or as a cowgirl or as a witch, he would wander the streets in the dark with his creepy mask on and hooded coat, and nobody would mess with him. At night people thought it was his real face, especially with his hood drawn up. It was pretty clever when I look back on it.

But I always think back to being that little girl, screaming and running in terror away from him as he played the bad guy. Why do we like to be frightened? Children especially love it and beg to be scared. They seek out scary stories, but nothing too real or too scary.

As we get near Halloween, I find myself thinking about this often. The difference, I think, is whether the terror is safe or not. Can the bad guy take off his mask and he’s laughing and normal again? Or is the bad guy real and this isn’t a joke?

For kids, the fun is in the chase, but knowing that the monsters aren’t so bad if you get to know them. The monsters may look spooky, but they’re safer than the real monsters in the world right now like the coronavirus or the hundreds of headless goats in the river.

I think it’s important as an author to understand why people love to be scared, why people devour horror books and movies, love going to haunts, love being chased by zombies, and why they binge watch true crime shows and Jason Vorhees skewering people. These are all safe fears and are a wonderful escape from the real terrors of the world. I think horror fans dig into this concept more than any other group of people, because when others wrinkle their noses at the amount of blood in Tucker and Dale Versus Evil, we just laugh until we cry. We see it as a catharsis. After all horror and comedy aren’t that far apart.

Horror fans get the true meaning of the season and embrace the scares, regardless of their age. Halloween is the best time of the year to forget about all the real terrors of the world and dive into your horror taste of choice. So put on your mask and enjoy the spooky season that only comes once a year.

Marlena Frank is the author of young adult fantasy and horror novels, including the Amazon bestseller Stolen. A 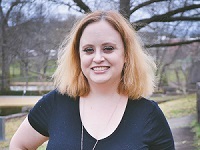 Georgia native, she has been writing and publishing short fiction since 2010. She serves as the Vice President of the Atlanta Chapter of the Horror Writers Association. Her latest release, The Impostor and Other Dark Tales, is her first short story collection and was released in September 2021.

You can find her work here:

Read the short story “Dead Man’s Hill” from The Impostor and Other Dark Tales by Marlena Frank.

A flash of color in the night sky was the signal, and Stevie rushed over to the picnic blanket to get a good view. All night they had waited for this, shivering in the darkness and bundled under layers of clothes. Campfires weren’t allowed of course, which meant no hot meals. Dad had brought him first thing that morning, so they had one of the best spots.

The graveyard was at the base of the hill below, and Stevie could barely contain his excitement. “Where are they?”

Dad put a hand on his shoulder and gave him a squeeze. “Calm down, I’m sure they’ll show soon.”

Along the edge of the hill, Stevie could see hundreds of others gathering, pushing and clustering together. Silence fell over them and the air felt heavy. Stevie could feel his heart pounding and he bounced on his toes, unable to keep still.

“I don’t see anything. What’s taking them so long?”

Dad crouched down next to him. “I guess it takes a while to dig out.”

He hadn’t thought of that. Instead of looking for shambling corpses, he started looking at the headstones instead. Sure enough, he spotted movement next to the tallest one down there: an enormous angel statue with wings spread wide.

Stevie pointed down at it, his voice loud enough to be heard by others. “That one – it’s moving!”

The ground split open even as he said it and a hand broke through the cold earth. Stevie put on his night vision goggles, barely able to contain himself. He zoomed in and watched the man dig his way out: first an arm, then another arm, and finally his head. He was rather tall and had a long mop of white hair that was now thoroughly filled with mud and grime.

“You’re not scared, are you?” Dad whispered beside him.

“Uh-uh,” Stevie muttered, staring transfixed as the man pulled himself out completely. His body was so decomposed that Stevie could count each rib that poked out beneath his white collared shirt. His skull was exposed, and it gleamed as it caught the moonlight.

“That’s grandpa!” A little girl shrieked near him. Someone tried to quiet her, but she wouldn’t listen. “My grandpa is the first!”

Stevie, who was still zoomed in on grandpa down below, was amazed to see how quickly the head spun in the little girl’s direction. Then in a flash, he was darting toward the crowd, knocking himself into gravestones and stumbling before he began to make his ascent.

“Dad?” Stevie whispered, unable to keep the fear out of his voice.

His father was silent for a moment, then turned to a nearby onlooker and asked, “They going to do something?”

Grandpa was crawling up the cliffside far faster than Stevie would have expected. He didn’t even need the goggles now to see him coming closer to them. Stevie reached up and tugged at his father’s sleeve. The crowd was backing away, pulling their children back with them.

Dad picked Stevie up and did the same. He had taken two steps back when grandpa reached the top. Moonlight reflected in dead grandpa’s eyes. Stevie was breathing so hard he was shaking. He clung to Dad’s shoulder, twisting the strap of the goggles in his fingers.

Others were shouting now, screaming to kill it. Guns weren’t allowed up here though, not on Dead Man’s Hill. It was the same for cameras and cell phones too. They were afraid it would agitate the undead, though it seemed that shrieking little girls were just as dangerous.

Grandpa was standing directly in front of them now, turning his head slowly as though choosing a dish at a buffet. His white eyes landed on Stevie. He cocked his head to the side, making a bit of drool fall from a mouth that could no longer close, then darted forward.

There was a loud bang that reverberated across the valley and a splatter of blood splashed out from grandpa’s head, streaking up the invisible wall that stood between them. Stevie stared at it with wide eyes as grandpa collapsed to his knees, then keeled over completely. Nervous laughter emerged around them and slowly the crowd moved forward again.

Dad laughed. “Aw, you weren’t that scared, were you?”

Stevie shook his head, transfixed by the corpse that lay mere feet away from them.

“We can go home now if you want. Your mother said you might be too young for this. Maybe she was right.”

Stevie pulled his goggles on again. “No, I want to see more zombies.”

“Alright, alright,” Dad sighed and put him down on the ground again. “But if we get another runner on this side, you’re not going to get picked up, okay?”

“Okay, Daddy.” Stevie grinned as another zombie broke ground, this time closer to the crowd.

The little girl cried out, “Up here, Mr. Zombie!” She was standing beside him now and Stevie smiled.

Pretty soon every child on the hillside was taunting it, eager to lure it up to them.

“Kids.” Dad laughed and rubbed his back. “I’m glad Halloween only comes once a year.”

THE IMPOSTOR AND OTHER DARK TALES 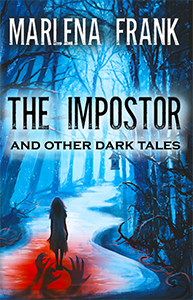 The beautiful and the bizarre

Something watches from the corner of the room, peeking through a crack, existing within an impossible space—what does it want?

The ghost of a lover returns at the end of a lifetime, carrying a dark secret—what will she say?

A woman struggling with identity finds herself in the arms of a dangerous woman with a mysterious curse—what will she find?

The beautiful and the bizarre exist side by side in this collection of fantastic and strange tales by prolific short story author, Marlena Frank. From dark fantasy stories of sharp-toothed mermaids and bewitched sorceresses to horror stories with ferocious bird beasts and golden-eyed monsters that live in the peripheral of human existence, these stories bring to life the creatures that haunt the nightmare world.

From heart-rending to heart-pounding, these tales will linger long after reading them.

“THE IMPOSTOR AND OTHER DARK TALES will give you exactly what it promises and each story will tug at your heartstrings and creep you the eff out. Trust me.”

“This collection is fantastic, I loved all of the stories. They are so twisted and twilight zone-ish!!”