October was here and Halloween was right around the corner. Fall time was my favorite season because I loved all things spooky and horror. I was fourteen and right at the edge of when kids stop going trick or treating. As an eighth-grader, I noticed my friends wanting to wear more revealing costumes. I guess it wasn’t cool to dress up as vampires or ghosts anymore. The more cleavage the better and the higher you could roll up your skirt the more Myspace comments you got.

Things were tough at home. My mother had lost her job and my father’s hours were cut. My parents also just

had a baby. To make matters worse, one of the cars stopped working, so my parents had to make do with one car. Money was tight, dinner was less, and sometimes ramen noodles were the food of choice for a couple of nights. The hard part about being in eighth grade is that kids aren’t ashamed to point out the fact that you’ve worn the same shirt for three days straight or if your shoes have holes in them. At this age, kids don’t comprehend that poverty is a thing.

“Why can’t you come with us to Party City to pick out costumes?”

Red-faced, I lied and said, “I’m not feeling well. I’ll go without you guys.”

No one knew that I had fought with my mother the night before begging for thirty dollars to buy a Halloween costume. To be with my friends one last time. To be a kid.

“I don’t have the money. Aren’t you a little old for that? Grow up. Your little sister needs clothes. There’s no money for a Halloween costume.”

Halloween came and I was stressed. I was supposed to be at my friend’s house at three o clock. I didn’t have a Halloween costume and because my dad took the only car to work, I had no ride. I sat on the floor of my room, tears streaming down my face, not knowing what to do. My mother, having sympathy for me, came up with the idea of wearing one of the Halloween decorations that my father put up on our front lawn. There was a fake witch wearing a black shawl on a stick with a scary mask attached to the top. I went outside and took the shawl and put it on. It fit close enough and I had nothing else. My friend Courtney said she had extra red and black makeup I could borrow. All I needed was the ride. Luckily, our other friend Sara only lived twenty minutes away and could pick me up and bring me to Courtney’s

Upon arriving at Courtney’s house, my friends took out their Party City costumes. Courtney was a sexy devil and Sara was a catholic school girl. I took out my witch shawl and put it on. Both girls looked at me like, “What the hell is that?”

Then it happened. My worst nightmare moment.

“Amaris, wasn’t that thing hanging outside your house?” Sara asks.

My chest felt like it had more rocks on it than when Giles Cory was pressed to death.

“No, I bought it from the store yesterday,” I responded defensively.

This was it. This was how I was going to die. Death from embarrassment.

“Um…are you sure? Because I’m pretty sure I saw that outside your house last week. You should have come to Party City. It was so much fun.”

Me thinking: Like yes, Nancy Drew, it was outside my house. Why the hell do you care anyway? Couldn’t you realize I obviously didn’t have the money for a costume?

Then the angel Gabriel shined down some help with Courtney screaming and changing the subject because some boy she liked texted her.

Oh, good. The attention has shifted away from my ratchet costume.

After we were all dressed up with makeup and hair, Courtney’s mother came to take a picture of us. As we went into the neighborhood to get our candy. I saw everyone else’s costumes. They had props, fake machetes, terrifying makeup, and there I was wearing a black piece of cloth from 2002.

To make matters worse, I had no ride home. I literally had no idea who was picking me up, because my mom didn’t have a car. This was going to be a fun conversation with Courtney’s parents that night. When one of them had to drive me home from Northampton to Agawam. 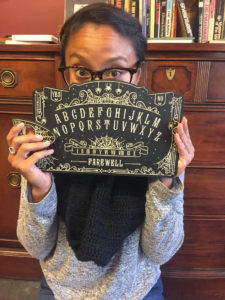 I love Halloween, but I didn’t feel the Halloween spirit. I walked behind my friends who were taking photos of each other and laughing in their thirty-dollar costumes, unable to mold. I cried. I couldn’t believe I was crying, but there I was, wiping away my tears and destroying my one-dollar black eyeliner look.

We rang the doorbell of some old lady’s house. Courtney took one Snickers. Sara took two Kit Kats. All the good chocolate was taken and what was left were Milkduds, Mike & Ike’s, and Baby Ruths.

The old lady looked down at me and my costume and asked me why I looked so sad. Witches weren’t supposed to be sad. They were supposed to be scary. I smiled and took a Mike & Ike.

As I turned to leave, she said something unexpected. “Enjoy it. You won’t be able to do this forever.”

The door closed and something else inside me did as well. I didn’t feel like a witch. I felt like me, but that I was pretending to be something I wasn’t. I wanted to take off that costume and go home.

But I didn’t have a ride. So there I was, stuck behind two girls who weren’t really my friends, on a night I loved more than anything. The magic was gone and that was the last time I ever went Trick or Treating.

But that old lady was wrong.  I write horror now – I can do Halloween forever.  Maybe I can’t trick or treat, but I still

have Halloween in my soul.

As an adult, if I am lucky to visit home during the fall season, I walk up and down the streets and remember what it was like to be happy, to wear a costume you were excited to wear and to carry a pillowcase to hold all the goodies you were bound to get on Halloween night.

I feel bad for kids now, as it seems they don’t have the same Halloween I did as a kid.  I see the leaves collecting on the corners of the roads and piles of them, un-jumped. I even see fewer Halloween costumes in the stores. It’s not as safe anymore to walk around at night. More and more bowls are left out on the front steps with signs that say “TAKE ONE.”

The fear teachers have of upsetting religious parents when Halloween is mentioned in the classroom.

I miss those nights of spooky terror and becoming something else.

Now, I’m just me on Halloween, but sometimes, when there’s no one around. I jump in those leaf piles and I 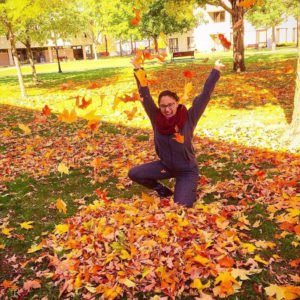 remember the magic. And for a moment, I’m a kid again.

Amaris J. Gagnon is a young screenwriter and playwright based in Los Angeles, California. After spending twenty years in the woods of Massachusetts, Amaris felt like she couldn’t fit the mold, so she did the one thing no one ever did. She left and moved across the country to Los Angeles. 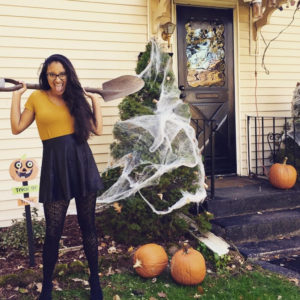 She is primarily a horror, drama, and science fiction writer with a passion for the macabre and spooky. Amaris grew up writing gothic short stories and eventually learned how to write for the theater and the camera. She directed her first science fiction play last year, which sparked a new interest in learning how to be a well-rounded filmmaker.

Her favorite writers are Stephen King, Leigh Whannell, and Shirley Jackson. With a background in scripted and unscripted television, she currently works as a Writer’s Assistant/Showrunner’s Assistant in kids animation at Netflix on shows from the Roald Dahl universe. She’s actively trying to make the move to staff writer.

If You Can’t See It