Halloween Haunts: Rising from the Dead

Every Halloween, my father rose from the dead.

He would wait until his victims were so close there was nowhere they could run, and as those quivering trick-or-treaters’ hands stretched across the open coffin reaching for the individually wrapped Twizzlers splayed across his chest, my father’s eyes would open and he would attack.

My father died when I was eleven. Happened right before my eyes. His hand reached out, fingers trembling, and a crackling moan rattled in his throat. His eyes were wide, frightened, and he stumbled and fell.

He never got up again.

At the funeral home, I remember thinking I was used to seeing him in a coffin.

My father loved Halloween, you see, and every year he decorated our front lawn with hand-inscribed gravestones and mannequins dressed as monsters, and he donned a costume (his favorite: a two-headed monstrosity that he wore with bloodied clothes, a severed head in one hand and a sickle in the other) and with strobe lights and fog machines and horror-movie soundtracks completing the effect, he emerged from a coffin to horrify and delight trick-or-treaters. 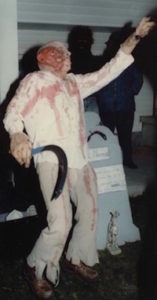 Rising again and again from the dead.

During the rest of the year that coffin, custom-made and perfect for Dracula—black, colonial-style, stood upright in our downstairs, its lid closed.

Inside were six shelves crammed with hardcovers and paperbacks. All horror novels. After my father died, I started reading those books. They were my baptism into horror literature.

Reading them was an electric charge, and it was all the more exciting because it felt illicit. None of my friends were reading these books. Their parents wouldn’t let them if they asked.

Horror stories helped me survive adolescence. I learned how to stand up to bullies, to face down fears, to accept that bad things happen to good people but that we do not have to let those bad things define who we are. We can, if we dare to try, let how we respond in the wake of tragedy define us.

By the mid- to late-eighties, my father’s Halloween tradition had grown in reputation and drew thousands of spectators annually. Our street was packed with people, and a line of cars stretched far down the next block. The police had to control traffic. 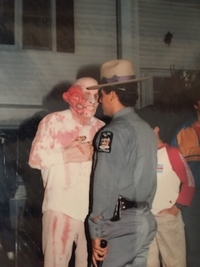 The event was so popular, the local paper wrote up a full-page article about my father in 1985. That article is framed and hanging near my desk. When asked about the popularity of his event, my father responded with a broader perspective about the appeal of horror: “I’m reading [or watching] disorder, but I’m safe at home in my chair. Like most people, I have two extremes—one rational and scientific, the other very irrational. I try to lead my life in between, balancing between the real and the unreal. What I like is being in control. I get to change the order of things. But it’s my disorder.”

And writing stories of madmen, monsters, and demons is my disorder.

Horror is a maligned genre, and yet the best examples of it are as literary and thought-provoking as any other writing. In fact, by virtue of its scope, horror is untethered, free to tackle personal and societal issues. It is the safe embrace of chaos. We experience the worst situations vicariously, be they individual or systemic. We imagine how we might handle a biblical Job-like devastation. What we might do in an apocalypse. We are forced to come to terms with our mortality.

We get a rehearsal for death. 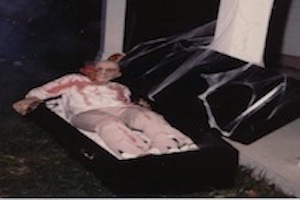 Horror is my father holding out his shaking hand and his eyes rolling back to all-white, not as a Halloween gag but as his last living gesture. It is the inevitability of his collapse, but it is also the assurance that in our grief there is hope that when the monster comes we might stand strong and face down whatever horror threatens to disrupt our lives.

My father’s last Halloween, there was no long line of spectators driving by, no swarming crowds of eager trick-or-treaters and amused parents. It was mostly a quiet night, and even with the strobe lights flashing, the fog machine fogging, and the soundtrack to Halloween blasting, the magic seemed lost.

My father was dressed as a rotting vampire and when he emerged from the coffin, a cadre of teenagers battled him back with shaving cream and eggs. Inside our house, I picked off the shell fragments and wiped clean the shaving cream. My father seemed dispirited, and I wanted him to yell at those kids, chase them down the street, maybe beat them up.

Instead, my father went back outside into his coffin and rose again from the dead. This time, when the eggs flew and the shaving cream splattered, my father did not retreat—he stalked after his attackers and they fled screaming and laughing into the night. Sometimes to recapture the magic and fight off the monsters, you have to become one yourself.

I’ve published a few books and every time I take up pen or pencil and turn to the blank page, I think of my father in that coffin on Halloween, embracing his disorder, battling back his own monsters by disguising himself as one, rising again from the dead, and trying once more to give a good scare.

TODAY’S GIVEAWAY: Chris DiLeo is giving away a signed copy of Dead End. Comment below or email HalloweenHaunts2020@gmail.com for a chance to win. 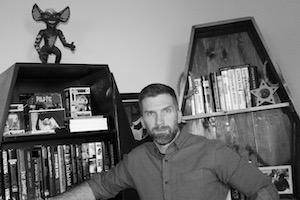 Chris DiLeo is the author of Dead End, The Devil Virus, Meat Camp (co-authored with Scott Nicholson), Blood Mountain, Calamity, and Hudson House. His next horror novel, Revival Road, is coming in 2021 from Bloodshot Books. He is a high school English teacher in New York. Connect with him @authordileo and authordileo.com.

Mike Munacy was eleven years old when he watched his father commit suicide, jumping off the towering hill behind his house to die in the grass at Mike’s feet. Fourteen years later, Mike and his fiancée, Dani, move into his boyhood home. Something is wrong with Mike’s mother, and moments after warning, “It came back. It never left,” she collapses and will soon die. Things get even worse when Dani sleepwalks into the woods…

Mike unearths books and personal documents that question all Mike knows about his parents and implicate his father in a horrific act. He turns to his neighbors—an unsympathetic old man, a stand-in father-figure, and a religious zealot—but these people harbor their own strange and deadly secrets. Mike suspects they know something about why Dani now whispers nonsensical things, lashes out aggressively, and ransacks the house.

Home can be a place of death…

After a child is found burned to death, Mike believes all the horror and misery must be connected. To save Dani and stop a curse his father helped unleash, Mike must learn the secrets of the past, expose a murderer, and confront monsters both human and supernatural.

…and death can be welcome…

With shades of The Exorcist and Pet Sematary, this is a story of secrets and beliefs, of the power of grief, of how we desperately seek meaning in harrowing events, and of the darker corners of hope, where happiness is only a shadow. Dead End will keep you “turning the pages…faster and faster”* until its shocking conclusion.

For some, home can be a place of death…

…and death can be welcome. 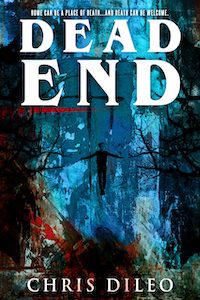 Read an excerpt from Dead End by Chris DiLeo:

A PLACE OF DEATH

I was eleven when I watched my father die.

He ascended the hill behind our house one May morning, slanting forward with purpose along the path where it sloped gradually. At the top, he stopped at the edge. The hill towered over the back deck, dwarfing the house. I enjoyed throwing G.I. Joes off that cliff-like edge, cupping my hands around my mouth to make echoey screams, and watching wide-eyed as the figures fell to clatter and bounce on the lawn.

Dad stretched his arms out at his sides. Blood dribbled off his face. I was in the kitchen at the sliding glass door and he was above me, crucified against a blue sky.

Mom already left for work, so it was only me kneeling beside my father, the cold ground wetting my pajamas.

He was sideways with his hips warped at an almost-impossible angle. The bloody side of his face lay against the ground. He shook as if freezing.

His eyes rolled up, completely white – the chalky, milky-yellow white of maggots – and pinkish bile bubbled between his lips. It stank, sharp and acidic. His whole face tightened, and a jagged blue vein bulged in his temple, a crack that might split open his skull.

Woods loomed all around us, thick and so dark it always seemed to be night in there. I never dared to explore any of it, scared of what might be back there, and right then I was sure something watched from the shadows. I felt its hungry stare.

The sun fractured through clouds and the world magnified in startling brightness. My father’s fingers trembled in the grass, and he reached toward me with one arm but couldn’t lift it very far – bright blood streaked his palm – and I leaned into his hand. He’d never shown me such affection. He was a distant man, something of a stranger to me. The flesh was warm. His fingers tapped Morse code on my cheek.

“Dad,” I said and could say nothing else. What could I say? We weren’t close, but he was my father and I loved him. I was only a little kid.

His hand slipped back to the ground. I tasted salt at the corner of my mouth. His lips parted, and he spoke his dying word, his voice quavering with it.

Thick blood ran from his nose and streamed down through his beard to pool in his ears. His hands twitched, pink vomit oozed over his chin, and he was still.

I was screaming by then, but my voice gave out quickly and I slumped there sobbing in awful scratchy hiccups, scared to move, not even daring to steal a final hug.

At the bottom of Mullock Road, a school bus’s air brakes sighed and a moment later the engine surged and the bus drove off. Birds chirped, and whatever thing watched me from the woods slipped back into the dark.

Dad’s blood dried in crinkly streaks on my cheek.

At the hospital, Mom draped an arm around me and pulled me close so my butt lifted off the hard plastic chair.

“Daddy had a heart attack,” Mom said. She sounded quiet, distant. “A heart attack. His heart was sick and stopped beating.”

She rested her head on mine. She smelled of baked cookies and sweat.

I pictured him on the hill, silhouetted against the vast, blue sky. Saw him fall.

I wanted his death to mean something, but I was afraid even then what that something could be.

Every death is meaningless.

2 comments on “Halloween Haunts: Rising from the Dead”