I grew up in a small town in North Dakota. I’d say the population was around 16,000 to 18,000 back then. In a town that size, there aren’t a lot of celebrities, but there are generally a handful of legends, or myths. Joe Pipe was one such legend among my circle of friends. Stories about his past varied some. He’d suffered a horrific injury when he got his leg caught in a power takeoff, according to some versions. Others had it that he’d left his mind in Vietnam and come back something of a husk. Me, I like to think he’d been faced with an opportunity to rescue his family from a house fire but seized up in the clutch and watched them all burn to death instead. A man doesn’t go through a thing like that unchanged, after all.

Whatever the particulars, we all agreed where Joe Pipe had taken up residence. He lived in a tiny hut in an alley off of Main Street. The way you learn this is by having a friend in the know drive you into said alley from the west, preferably on or close to Halloween night. No way are you going to show any trepidation over this. No way are you going to give any indication that you might not be able to handle something that your friend has clearly mastered. But when this friend stops the car in the middle of the alley and douses the headlights, a tingle starts up in your groin and begins to spread into your viscera. It is the delicious vibration of fear, because some twenty yards before you, backlit by a nearby streetlight through a fogged-over window, the figure of a man can be seen sitting stock still in his hut. “What has his rapt attention?” you wonder, for you can’t detect any motion in the man whatsoever.

And then there’s the size of him. He must be sitting, because his stature doesn’t top four-and-a-half feet. But he has the head of a linebacker. Is he monstrously deformed? Is this alley the extent of his existence? Your friend has answers. Rumor has it Mr. Pipe is never seen beyond his claustrophobic confines. He only sits, and waits. God help the errant child who wanders past the Pipe residence on a solitary nighttime stroll.

You squint your eyes and crane your neck, hoping for some further elucidation regarding the mysterious figure’s predicament. Maybe a little laughter trickles out of your friend at this point. You turn to him and more laughter erupts. Joe Pipe, you see, is nothing more than his surname would suggest: a large steel pipe housed in a utility shack that someone long ago took pains to beautify, to a certain extent. It looks almost like a tiny house. The prank wouldn’t work half so well absent this detail, I’ve often thought.

Joe Pipe. You’d think the name would be a dead giveaway every time, but our desire to believe in the occasional real-world tale of terror is strong. Besides, life is full of coincidences. I have a friend with whom I regularly exchange links to articles containing such ironies, in fact: a sex scandal taking place in Beaver County; a strong man hit and killed by a car at the age of 104. That sort of thing. So why not a Joe Pipe? Don’t we all want to believe in the strange, just a little? Don’t we sometimes want to dull Occam’s razor on a rough boulder or pitch it into the nearest dumpster? Don’t we often yearn to leave reason behind and walk naked into the light of instinct and faith?

I know I do, for brief, hallucinatory moments. But I’m also one of the lucky ones: I’ve so far been able to find my way back from these little journeys. You need look no further than the headlines for proof that not all of God’s children are so blessed.

TODAY’S GIVEAWAY: Pete Mesling is giving away an electronic copy of his debut fiction collection, None So Deaf. Comment below or email membership@horror.org with the subject title HH Contest Entry for a chance to win.

Pete Mesling’s debut collection of short fiction, None So Deaf, is currently available from Books of the Dead Press. Other publishing highlights include selling a story to Mort Castle and having it appear alongside a reprint of Clive Barker’s “Midnight Meat Train,” as well as working directly with the late Richard Matheson on an online retrospective about his career in film and television. Mesling has also sold work to such publications as All-American Horror of the 21st Century: The First Decade, 2000 – 2010; Night Terrors, from Blood Bound Books; Spawn of the Ripper from April Moon Books; and the HWA’s Poetry Showcase Volume III. He is hard(ly) at work on his first novel. Give him a virtual handshake at www.petemesling.com. Purchase his work at www.amazon.com.

“Reminiscent of the best and darkest work of David Morrell and Dan Simmons … You can smell and taste these stories, which are written with a surgeon’s eye for detail and a mortician’s sense of drama. Highly recommended!”

“We’ve got the genealogical report in on Pete Mesling. There’s some Fredric Brown. Some Kafka. And even some Brautigan. But mostly there’s Mesling. And that’s 100% unique and original. As is NONE SO DEAF, this memorable collection.”

“Pete Mesling’s NONE SO DEAF gave me a serious dose of the creeps. Herein lies an assemblage of horrors that, when it isn’t reminding you of Bradbury at his grimmest, will have you double-checking the locks and turning on all the lights. Wonderful stuff indeed.”

“Claustrophobic and terrifying; you’ll be holding your breath.”

“Flashes of darkness … moments of the macabre captured like the snapshots of a scream … or an impaling. Short, fast, and deadly moments of discovery!” 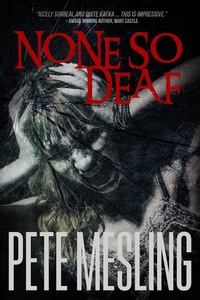 “A terrific new author. His work is fresh and different.”

Read an excerpt from None So Deaf by Pete Mesling.