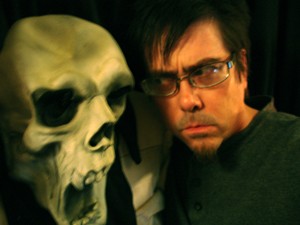 Hello HWA!  And Happy Halloween 2015!  My name is Christopher Alan Broadstone, and I’m a musician, writer, and filmmaker, as well as being a brand new member of the Horror Writers Association.

In the many online interviews I’ve given over the years I’ve consistently been asked what has inspired me to write such intense horror?  My instinctual response has always been: I don’t write horror, I write Christopher Alan Broadstone stories.

Until my first film (“Scream For Me”) won “Best Short” at the New York City Horror Film Festival and my second film (“My Skin!”) won in the “Best Horror Short” category at Shriekfest in L.A., I didn’t feel remotely part of the horror community. After that, and subsequent horror festivals and awards, I felt a bit more connected to the world of horror, but in the way an abandoned human baby might feel, finding itself taken in and raised by a pack of congenial wolves –– in my case, very possibly werewolves.

My point is, I’ve never set out to write a “horror” story, as such, but what pours out of my brain and spills onto the page is always extremely dark, violent, and bloody.  I sometimes wonder how many other authors feel this way?  It’s just my opinion, but I don’t believe Edgar Allen Poe purposely set out to write skin-crawling tales, it’s just who he was on the inside and it simply gushed out of him in the only way it could: black as a moonless night and grim-gray on sunny days.  Although Poe is usually catalogued in classic literature, most people think of him as the grand master of horror.  As with my writing and films, readers and viewers also default my work into horror.  Again, I thought I was just writing Christopher Alan Broadstone stories.

More specifically, I’ve always focused on topics that inspire the intellectual side of my imagination, often forcing me to do research I otherwise wouldn’t bother with.  All of this is a roundabout way of saying I’ve never written for genre –– ghosts, vampires, zombies, etc. –– and I haven’t bounced between genres either.  My tales often probe the philosophical and psychological horror of the human condition, dragging my readers into dark and unexpected places they might not want to go.  But where did all of this begin?

My mother still tells me that I used to sit in front of the TV as a toddler and watch the daytime series “Dark Shadows”.  Apparently, I was quite mesmerized by the vampire Barnabas Collins; his fangs entranced me.  The first horror film I remember seeing was another vampire tale, a TV movie called “The Night Stalker” starring Darren McGavin.  I was so terrified I could barely watch it, eventually forced to quiz my parents about what was happening as I cowered in the doorway of an adjacent room.

In spite of my early fascination with horror-genre television, I more often found myself watching old musicals and comedies –– films with The Marx Brothers, Laurel and Hardy, and W.C. Fields.  My favorites, as fate would have it, were the funny spook movies with Abbott and Costello, such as “Hold That Ghost” and “Abbott and Costello Meet Frankenstein”, or Don Knotts’ “The Ghost And Mr. Chicken”.  I also remember being utterly fascinated with “King Kong” (1933).  Having said all this, I nonetheless strayed from ghoulish movies or books until I was about 21.  I was more into sci-fi.

I also became interested in religious history and the occult, especially the notorious strains such as Satanism –– anything that involved pagan rituals or iconoclastic behavior.  Yet it wasn’t until making notes for a very early novel that I suddenly realized it didn’t matter what type of books I read or movies I watched, all my own writing had a macabre bent.  Eventually I embraced my dark side and forever abandoned any efforts to steer myself toward pure sci-fi or other mainstream fiction.  Even so, I still wouldn’t define myself (then or now) as a huge fan of horror, but that the horror is innate within me.

At one point in my life I would’ve claimed I simply had a morbid fascination with death and a proclivity for depressing things.  Nowadays, however, I acknowledge that I’ve always been unusually sensitive to the absurdity and wickedness of humanity and the futility of existence.  As well, my personal frustrations and fears have consistently played a part in all my creative endeavors.  No matter how hard I might try to only be entertaining, I find my true inspiration in commenting on the disturbing side of reality.  It’s true, I can be a consummate nihilist.  But I’m also a sucker for human triumph.  I get a tear in my eye every time I see video of an Apollo rocket or Space Shuttle explode to life and escape into the romance of space –– the limitless imagination that lies beyond the oppression of this mad world.  If you want to know what’s horrifying to me, watch a documentary expounding the Nazis or a million other atrocities spawned by human monsters.  Or simply switch on the news and observe Mother Nature’s merciless exhibitionism on display as tornado, typhoon, hurricane, flood, or famine.  All of these nightmares inspire me to mentally ignite and put words on paper, writing my mind by way of my gut and heart.  And here arises another twist of my process.  Although piqued by the world which influences all of us, I tend to personalize events to the extreme, and often wonder if my work is far too insular for anyone to relate to, let alone broadly categorize.

So, once again, I wonder how many other authors and artists considered to be “horror” suffer from this sensibility and self-conscious domination?  I’m sure I’m not alone.  Make me or break me, “horror” is just how I’m made.  It’s simply who I am.

TODAY’S GIVEAWAY: Christopher is offering one e-book copy of Suicide the Hard Way: And Other Tales From The Innerzone and one of his novel, Puzzleman. Enter for the prize by posting in the comments section. Winners will be chosen at random and notified by e-mail. You may enter once for each giveaway, and all entrants may be considered for other giveaways if they don’t win on the day they post. You may also enter by e-mailing membership@horror.org and putting HH CONTEST ENTRY in the header.

CHRISTOPHER ALAN BROADSTONE is the author of the horror novel Puzzleman. A re-release of the novel and serialization of the book (with updates) is now available for Kindle and in Trade Paperback. Broadstone’s newest short story, “Note-To-Self,” is included in the anthology Journals Of Horror: Found Fiction (edited by Terry M. West). Suicide The Hardway: And Other Tales From The Innerzone is his latest work — a collection of short stories, screenplays, and lyrics/poetry. Currently, he is completing his second horror novel, Heather’s Treehouse.  Serving as writer and director, he has produced three award-winning short films to date, Scream For Me (Best Short Film: NYC Horror Film Festival, Best Underground Short: B-Independent.com), My Skin! (Best Horror Short: Shriekfest Film Festival [L.A.], Best Film/Director: Cinema Edge Awards), and Human No More (Best Horror Short: The Indie Gathering Film Festival [OH]). Also, he has completed two feature length screenplays, Color Of Flame, an erotic ghost story, and, with actor/writer John Franklin (Isaac from “Children of the Corn”), Retard (Best Horror Feature Screenplay: Shriekfest Film Festival [L.A.]). In total, C.A. Broadstone’s films have been showcased on several horror compilation DVDs, have screened at 30 international film festivals, and have won 15 “Best Of” awards. All three films are currently available on Amazon as the anthology DVD, 3 Dead Girls!

Suicide The Hardway: And Other Tales From The Innerzone

“Suicide The Hard Way: And Other Tales From The Innerzone” collects 7 never-before-released stories of the macabre from Christopher Alan Broadstone, horror filmmaker (“3 Dead Girls!”) and novelist (“Puzzleman”).  “Suicide The Hard Way” also includes 3 screenplays for Broadstone’s award-winning short films, a film critic’s essay, film production diary, and 32 dark lyrics & poetry written for Broadstone’s band “The Judas Engine”, as well as hyperlinks to music and much more!

Praise For C.A. Broadstone and Suicide The Hardway: And Other Tales From The Innerzone

“Christopher Alan Broadstone’s work is always a highly crafted effort of dark art. I know he will take me places where I may not want to go, but I have to. Plain and simple: he is one of my favorite contemporary authors/filmmakers. His work haunts and is the stuff of nightmares.” –– Terry M. West, author of “What Price Gory?” and “Dreg”

“Christopher Alan Broadstone’s short films are a dark, surreal exploration into the human psyche, evoking as much horror and fear in the viewer as contemplative thought.” –– Michael Laimo, Bram Stoker Nominated author of “Deep In The Darkness” and “Dead Souls”

“[Christopher Alan Broadstone’s] stories stay with you and are delivered with an exclamation point.” –– Christopher Zisi, Zisi Emporium For B-Movies

“These are stories that will seep beneath your skin. Some may make you cringe or squirm, some may garner a twisted chuckle, but all will stay with you. I am quite impressed by the versatility shown within these pages.” –– Paula Limbaugh, Horror Novel Reviews

***Please enjoy a sample of SUICIDE THE HARDWAY: AND OTHER TALES FROM THE INNERZONE @ the link below.

One comment on “Halloween Haunts: I Don’t Write Horror, It’s Just How I’m Made! by Christopher Alan Broadstone”