Halloween Haunts: Halloween Memories in the Basement by Cecilia Kennedy

In a stunning feat of magic, my father, who was rehearsing his role as a terrifying Merlin the Magician for the local YWCA Halloween party, burned a hole in my mother’s underpants. I remember his excitement when he called my mother and me to the rec room basement to announce his latest trick that he was perfecting: passing a lighted cigarette through a handkerchief, but he couldn’t find a handkerchief. Mom’s underpants were the next best thing. We held our breath when we saw the smoke, hoping the white cloth underneath would get by, unscathed. It didn’t. It was the 70s, I was four years old, and I thought Dad’s trick was hilarious. My mother was horrified. But Dad was determined and kept practicing until he got it right. He loved Halloween and instilled in me a fascination for all things Halloween too which, in my mind, still come together in both spooky and comedic ways—screaming until I laugh and laughing until I scream.

The screaming part developed about the same time as my father’s failed magic trick—and in the same place: the family rec room. Other legitimately scary things took place there. For instance, the Eagles came out with “Hotel California,” which my parents would play on the stereo system—sending my imagination down dark corridors with locked doors at every turn. Also, they enjoyed their old Bobby Darin records, featuring “Mack the Knife,” and my impressionable mind would latch onto those references to sharks, oozing bodies, knives, and disappearances. So, that was it for me. Any mention of a family beach vacation in California would have probably sent me running for the dairy farmers down the street in rural Ohio screaming, “Keep me on your farm!” However, Dad’s Merlin routine? Not so much. I was looking forward to it.

However, when Mom took me to meet Dad at the YWCA, where he was already dressed as Merlin and set up for the Halloween party, I didn’t recognize the place. The whole gym, once filled with light and gymnastics mats and beams for my tumbling class, was suddenly full of shadows and fog—and my dad was the ringleader. I hardly recognized him. He was playing up his role—a lot bigger than in the rec room basement. The guitar riff from “Hotel California” played on endlessly in my head, followed by the jazzy Bobby Darin beats that make a serial killer sound like a friendly guy who just wants to dance—but while slinging sharks, blood, and knives. So, I turned to my mother and said, “Get me out of here.”

She did. We went home and ate candy while Dad had the time of his life playing Merlin and making all of the older kids (and some adults) scream-laugh. It seemed that he had a whole routine worked out and was quite the crowd pleaser, so I was proud. As an adult, I still appreciate finding those cross-sections between humor and horror—where the absolutely terrifying stems from absurdity—the laughable—the sleight of hand—where even the handkerchief, facing the flames of fire, is quietly masquerading as undergarments in order to be the last one surviving at the end of the night. 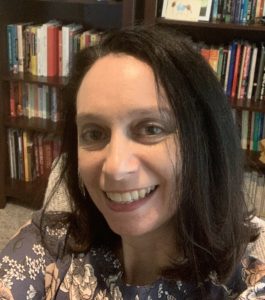