We moved a lot when I was a kid—hell, I’ve kept moving even as an adult—so I’ve managed to lose touch with people quickly. Just before my fifth birthday (maybe just before my sixth?), I went back to one neighborhood to deliver a party invitation to my friend Scotty. His own mid-October birthday party was in full swing, and I was asked to stay. Cake and ice cream commenced followed by a trip to a haunted house.

I had never been to a haunted house, but I knew the place we were going. The dilapidated structure sat next to the single-screen movie theater my grandpa managed and I basically grew up in. The signs at the house said it was split in two parts: a regular scary part and a “kid friendly” half.

“Kid friendly” is one of the biggest lies from my childhood. Also, “friendly” should never be used with a haunted attraction. “Fun for the whole family,” yeah, I can get that. But friendly? Mr. Rogers was not waiting for this pack of kindergarteners inside the walls of that house.

I remember one set in particular. A man, probably just a teenager, sat on a chair inside a cage. The cage was filled with spiderwebs. A giant spider soon appeared behind him and one of his eyes began to glow red.

My mom remembers picking me up: white as a ghost, and sobbing. I don’t think I ever saw Scotty again after that.

A decade later and a few miles north on Utah’s Interstate 15, I sat filling out a schedule of nights to work at The Haunted Forest, an outdoor haunted attraction. I checked off almost every night, looking forward to the payday from a few hours a night at $3.61 an hour, which was Utah’s under 18 minimum wage in 1995. I left one night blank: Halloween.

“But it’s biggest night of the season and we need everyone we can get,” the supervisor said.

I got the night off after a month of scaring the tar out of people. I didn’t see any kids come through because the place was advertised as a 12 and up experience. I changed roles almost every night, sometimes I got lucky and got to work a chainsaw. There are very few thrills in life like chasing someone with a chainsaw, jumping over a fight pit and starting it because you don’t want to miss a group, and hearing the screams.

I didn’t get to work a haunted house again until the month of my 24th birthday, but those memories—being scared as a child and scaring others as a teen—stuck with me. Las Vegas is home to one of the best haunt operations in the United States: Freakling Bros. HorrorShows. I sweated in the latex mask and would often ride the bus home with black make-up still circling my eyes. Freakling Bros. wasn’t just a haunted house. They put on a show. Where other places rely on animatronics, Freakling Bros. always had people.

Not everyone worked out. If Duke or JT (the father-son team who ran houses in three separate locations that year) heard you say “boo” or break character for a non-safety reason, you were invited not to come back.

I had such a good time that I didn’t take my birthday off that year. JT, however, mixed things up. He asked me to take the front spot that night. I gave up my role as Toastie, the crematory operator, and took on the role of mortuary owner. The part was more about crowd control and giving out the rules to patrons. It was also about presentation. So when JT asked if I could get the hundreds of people waiting in line to chant “Hail, Satan” in order to drown out the bullhorn-assisted Christian protestor, I said, “Hell, yes.”

It’s all part of that rush: I get it now from writing horror stories, even though the payoff is rarely in person. I don’t get to hear you scream when you read one of my stories. In my heart, however, is a little boy still screaming and wanting to go home. There is still a teenager who doesn’t know, but hopes, he can make a life out of scaring other people.

Your screams are the best birthday present this Halloween baby could ever ask for. 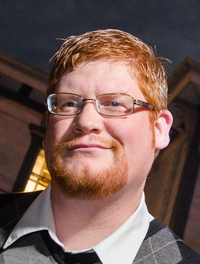 T.J. Tranchell was born on Halloween and grew up in Utah. He has published the novella Cry Down Dark and the collections Asleep in the Nightmare Room and The Private Lives of Nightmares with Blysster Press and Tell No Man, a novella with Last Days Books. In October 2020, The New York Times called Cry Down Dark the scariest book set in Utah. He holds a Master’s degree in Literature from Central Washington University and attended the Borderlands Press Writers Boot Camp in 2017. He currently lives in Washington State with his wife and son.