Every Halloween I follow certain traditions. A handful of movies I dig out to watch, some music I like to play, favorite candies to pick up at the store. But my favorite is diving into some classic horror comics. There’s nothing quite like the experience of reading a well-written, beautifully drawn, scary story. And my favorites and perennial Halloween reads are EC Comics. There’s something special to those creepy, old tales from the 50s that makes them resonate as much today as they ever have, something beyond their tightly plotted stories and stunning illustrations, something vital and fundamental to the entire horror genre…

Against a pastel night sky ripe with a jaundiced moon, a red-eyed ghoulish figure in a long, emerald robe crosses crumbling ruins toward a woman in a red dress. He clutches a silver knife at his side. Her feet bound, her arms tied to an ancient column, the woman twists her head, spilling her lush, black hair on cold marble, as she stares in helpless terror. Her eyes lock on the ghoul’s hungry leer in a frozen moment of suspense, inviting the observer to speculate, to wonder, to fear what may happen next… or to open the cover and find out? 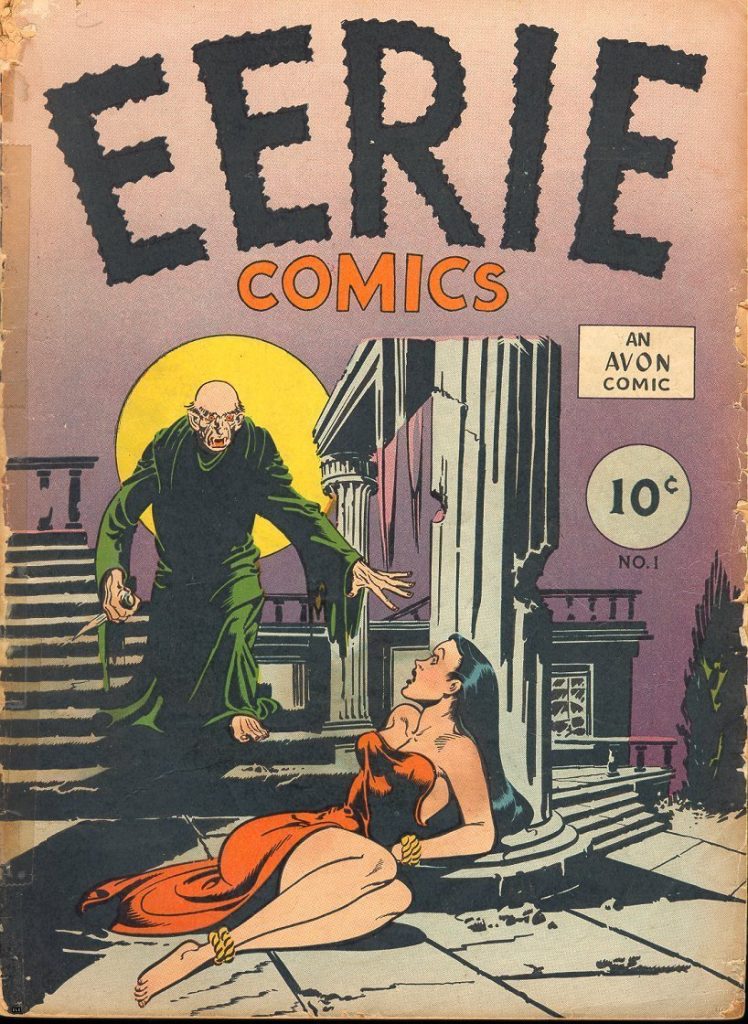 January, 1947. This image lurked on American newsstands and dared—or perhaps tempted readers to answer the invitation. Those with a dime to burn and the courage to look beyond that image found the remarkable contents of the first standalone horror comic book ever published. Eerie Comics, produced by Avon Periodicals, featured writing by George Bellin, art by Fred Kida, George Roussos, Joe Kubert, and others. With tales of taxidermy tiger ghosts, man-eating lizards, and murdered spouses, it established the horror genre in comic books—and then… it faded away like a ghost.

“Ma, Pa, I swear it was right here on the newsstand last month, a real-life horror comic with ghouls and gals and a full moon and everything. It wasn’t all a dream. It wasn’t!”

“Sure, sure, Johnny, we believe you. Go along and play baseball now. Horror comics, hmph! What will these kids think of next—flying saucers, little green men, pocket computers?”

Avon’s Eerie Comics sank into the shadows, leaving readers tantalized, teased, and deprived of the four-color frights they had briefly tasted. Not until June, 1951 did Avon raise Eerie Comics from the dead, a seventeen issue run that later transformed—by the light of a full moon, no doubt—into Strange Worlds. While those issues remain as memorable as the eleven novels Bram Stoker wrote not titled Dracula, the very existence of Eerie Comics proved virulent.

In comics’ golden age, any idea, genre, or format that moved copies off news racks spread faster than poliovirus. With super-heroes fading in popularity and sales plummeting, publishers eager for a quick buck found themselves flailing for a lifeline. When one published a successful western, crime, or funny animal comic, every publisher soon pumped out western, crime, and funny animal comics. Only the big gun super-heroes still sold: Batman, Captain Marvel (who spoke the magic word Shazam!), Superman, Wonder Woman, and a few lucky others. Jungle adventures, aviation epics, science fiction visions, and even sports comics filled the vacuum because readers wanted realism—sort of—and thrills, suspense, and romance.

What they most desired but didn’t yet know was horror.

And the publishing company that finally delivered was founded by a true pioneer of the comic book, a company with the flagship title Picture Stories from the Bible so wholesome it operated under the moniker Educational Comics.

Summer, 1947, only months after Avon released Eerie Comics, Gaines died in a boating accident on Lake Placid, NY, by many accounts saving the life of an eight-year-old boy at the cost of his own. Real horror. True tragedy. A terrible shock to the industry—but even more so to Gaines’ family, and especially to his son, William, who inherited the family business, of which he had little knowledge and even less interest.

The abandoned house towers against the velvet night, a decaying edifice framed by the bare branches of a dead tree and an amber moon dappled with bats. A single panel of its double doors hangs askew, framed by dead shadows. A man in a suit stands with his back turned, facing the entrance, one foot on the house’s front steps. A woman—his wife, his girlfriend… his mistress?—clutches his arm, warning him away from the mysteries within…

Fall, 1948. Eerie Comics’ ripples made waves. American Comics Group (ACG) published Adventures into the Unknown, # 1, the first ongoing horror comic, which ran through 1967. Yet horror comics existed only as one more genre option among many on cluttered newsstands every month, a daunting array of competition that baffled Bill Gaines. He considered himself no publisher and the inheritance of his father’s company a mixed blessing—and yet, with nothing to lose, he chose to make the most of it. If he failed, he could always follow through on teaching chemistry.

Gaines changed the company name to Entertaining Comics, hired Al Feldstein as editor, and paid top dollar to attract the best artists in the business. In 1950, he changed the title of middling-seller Crime Patrol to… The Crypt of Terror.

A beautiful woman dressed for a night on the town takes a shortcut through a trash-strewn alley. Behind her, a frantic, well-dressed man peers from behind a corner, watching her. Stalking her? On the ground, a windblown newspaper sticks to a dented trash can upon which a black cat stands. It blares the headline: WEREWOLF STRIKES AGAIN!

Three issues later, The Crypt of Terror became… Tales from the Crypt.

Gaines’ taste for top talent made EC Comics stand above all others in quality, and his new direction leapt off the stands. Soon The Haunt of Fear and The Vault of Horror followed, the trio of periodicals indelibly imprinting not only the future of horror comics but of the entire horror genre. Gaines’ expanded his line to include Crime SuspensStories, Shock SuspensStories, Frontline Combat, Two-Fisted Tales, Weird Fantasy, Weird Science, and a humor publication called Mad.

Overnight, EC became the 800-pound, man-eating thing in the comics biz. Their success rankled the competition, who first stooped to imitation then made a deal with the devil when their knock-off comics failed to live up to EC’s. In paranoid, 1950s America, witch hunts found easy traction among minds full of fear of nuclear war, of Communism, of disease, of changing social orders, and, yes, even fear of comic books. Thanks to self-aggrandizing, head-shrinker Frederic Wertham and his infamous book Seduction of the Innocent, much of the country believed that comics caused all juvenile delinquency.

Old Doc Freddie’s drummed-up hysteria inspired Senate hearings and the birth of the Comics Code Authority, a self-imposed censorship lash meant to whip comics into the wholesome mold prescribed by the doc himself. Gaines, who fought trench warfare with the Authority over everything from sex and violence to right to publish a story with a black protagonist, even testified before the U.S. Senate when that illustrious body took offense to Johnny Craig’s cover of Crime SuspenStories # 22.

Senator Estes Kefauver: Here is your May 22 issue. This seems to be a man with a bloody axe holding a woman’s head up which has been severed from her body. Do you think that is in good taste? 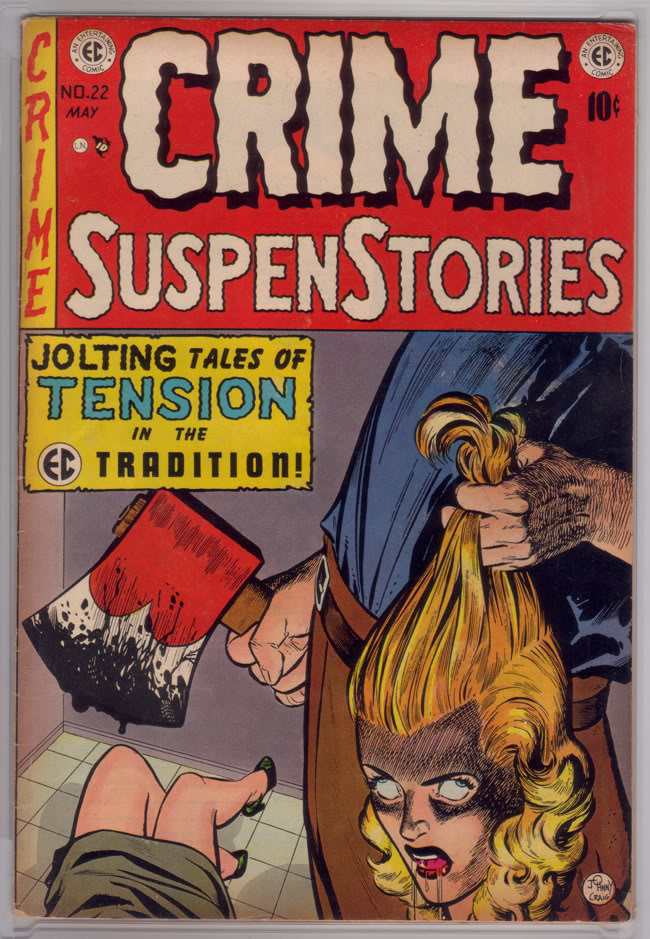 Gaines ended the EC Comics line in 1954. After a few attempts at new comic book series, he turned his full attention to Mad, which escaped the Authority by switching to magazine format.

Like any good corpse in an E.C. story, though, those comics have risen from the grave time and again. By the 1970s, Warren Publishing’s Creepy and Eerie magazines proved that horror in the EC mold remained as popular as ever, and Marvel Comics stampeded the Code’s old bans with popular titles such as Fear, Tomb of Dracula, The Monster of Frankenstein, and Werewolf By Night.

Today the Comics Code is long-gone, and old Doc Freddie rots six feet under, his place in history as a censorious laughingstock quite secure. EC Comics, on the other hand, have stayed in print for decades in formats from standard comic reprints to high-end, hardcover collections, gaining new fan-addicts in every generation, and having inspired horror creators from Stephen King to John Landis to Bernie Wrightson and countless others—because great horror stories speak truth, and although it may take years, the truth always beats small minds.

For the next thirty-one days, members of the Horror Writers Association will present to you their memories of Halloween, their favorite traditions, their thoughts on horror writing, and peeks into the terrifying worlds of shadow. Our contributors this year include Greg Chapman, Nicole Cushing, T. Fox Dunham, JG Faherty, Pete Mesling, Lisa Morton, John Palisano, Loren Rhoads, David B. Riley, John F.D. Taff, Steve Rasnic Tem, and many others. So bookmark this page, join our Facebook event page, and don’t miss a day of the fun and chills!

You can learn more about joining here: https://www.horror.org/joinhwa.htm. Or send questions to: membership@horror.org.

A special thanks to all of our contributors for sharing their Halloween anecdotes and traditions, suggestions for celebrating the season, and thoughts and advice about writing horror. It’s a great pleasure to coordinate and edit Halloween Haunts and to have a chance to work with so many of my fellow HWA members. Thanks, as well, to Lisa Morton and Angel Leigh McCoy, whose continued support make this event possible. Thanks to Greg Chapman for drawing and designing our wonderful Halloween Haunts banner and to Doug Murano for his help in promoting Halloween Haunts on HWA social media. And now, the treats…!

BIG HALLOWEEN DAY GIVEAWAY: On October 31, as a special Halloween treat, the Horror Writers Association, will be giving away a Kindle Fire HD6 to one lucky winner! To be eligible for this, you must comment or e-mail according to the rules below on October 31st!

GIVEAWAY RULES: In addition to their posts and excerpts, many of our contributors are offering e-book and print copies of their books for lucky readers who enter in each giveaway. If an author is offering a giveaway with their post, it will be noted and the format specified (print or e-book). Enter for the prize by posting in the comments section. Winners will be chosen at random and notified by e-mail. You may enter once for each giveaway, and all entrants may be considered for other giveaways if they don’t win on the day they post. You may also enter by e-mailing membership@horror.org and putting HH CONTEST ENTRY in the header.

TODAY’S GIVEAWAY: James Chambers is giving away one copy of his forthcoming graphic novel, Kolchak, the Night Stalker: The Forgotten Lore of Edgar Allan Poe, upon it’s release from Moonstone Books in November. Read a preview below! 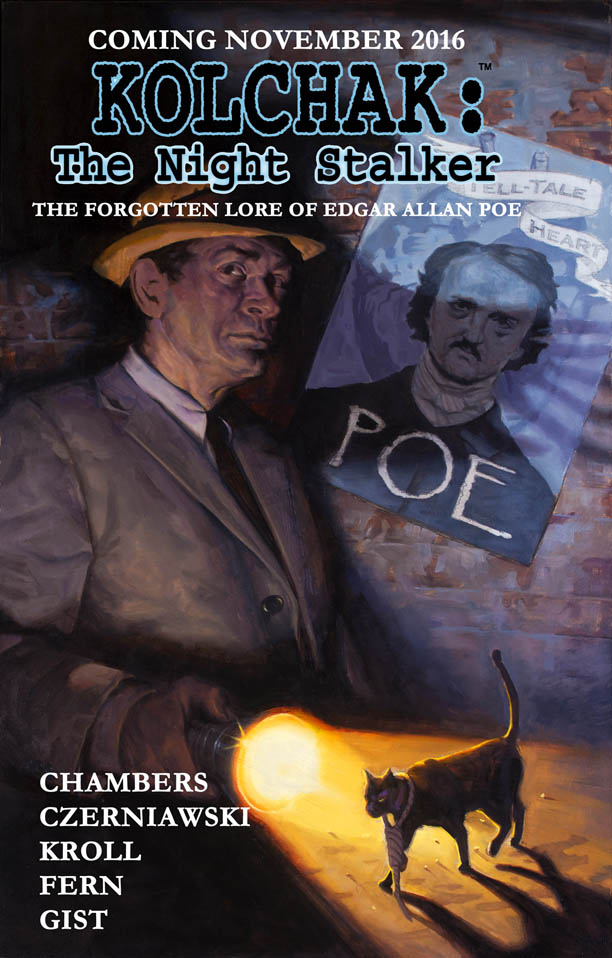 Read a preview of Kolchak, the Night Stalker: The Forgotten Lore of Edgar Allan Poe.

JAMES CHAMBERS’ tales of horror, crime, fantasy, and science fiction have been published in numerous anthologies, collections, and magazines. Publisher’s Weekly described The Engines of Sacrifice, his collection of four Lovecraftian-inspired novellas, as “chillingly evocative.” His other works include the novella Three Chords of Chaos, The Dead Bear Witness and Tears of Blood (the first two novellas in the Corpse Fauna series), and the story collections Resurrection House and The Midnight Hour: Saint Lawn Hill and Other Tales. His stories have appeared in the award-winning Bad-Ass Faeries and Defending the Future anthology series as well as Allen K’s Inhuman, Bare Bone, Chiral Mad 2, Clockwork Chaos, Dark Hallows II: The Witching Hour, Deep Cuts, The Green Hornet Chronicles, In an Iron Cage, Shadows Over Main Street, Truth or Dare?, Qualia Nous, Walrus Tales, and many others. He is online at www.jameschambersonline.com.