Halloween Haunts: Everything I Know About Sadism I Learned From Alfred Hitchcock by Pete Mesling

Halloween is not unlike death itself, I suppose. We know it’s only a matter of time before it arrives, whether we want it to or not. It’s more predictable than death, of course, arriving like clockwork every thirty-first of October, with its jack-o-lanterns, scary costumes and dry leaves that blow through the moonlight. But it carries with it the same kind of fascination and dread with which we contemplate our own demise.

So to celebrate Halloween is to celebrate … not death, exactly, but the idea of death. The possibilities that death presents us with. There is hope in death. Hope that there is more in store for us than worms and rot and failed legacies. There is also fear in death. Fear that we have erred so egregiously in life that what awaits us on the other side is horror upon horror upon horror.

The grim holiday has always had that kind of weight for me, even as a child. It makes sense, I suppose, that most people who grow up to love terrifying fiction and movies start out loving Halloween. It’s an obvious draw for the dark minded. I think the pip of the horror fan germinates at a very young age, in fact. And as we all know, that which germinates must eventually propagate.

If you want to know how I began spreading the gospel of all things terrifying during my pre-teenage years, I’ll tell you plain and simple: cruelty. Let me explain. For several years I threw a small Halloween party right before trick-or-treating. It was a simple affair. My mom would prepare some refreshments. We’d light a few candles in the basement, turn out the lights … and then I would drop the needle on one of two spoken-word records still in my collection to this day: Famous Ghost Stories! With Scary Sounds and Alfred Hitchcock Presents Ghost Stories for Young People. I’m not sure if the former was my introduction to Poe’s “The Tell-Tale Heart,” but the latter was most certainly my introduction to Saki’s “The Open Window.” Oh, and that business about the ghost stories being for young people? I have no doubt it was a vicious ploy by the Master of Suspense to sneak the record past those would-be censors known as parents. He must have known that any ghost story, whether labeled for young people or not, has the power to frighten and alarm.

So it was Hitchcock’s fault, you see. He started it, the sadistic bastard.

Of course, my friends who showed up for those parties—Bill, Dan and Pat were the usual suspects—would likely keep the crosshairs of blame trained squarely on yours truly for putting them through the horrors of those chilling tales, so thrillingly narrated and rich in atmosphere. But I like to think that after their nightmares subsided, they were left with a fondness of, or at least a respect for, the tale of terror. Surely such a satisfying potential result justifies the mildly heartless methods employed. I hope my daughter comes to see it that way, at any rate, for now I’m passing the terrifying treasures found on those ghostly records on to her. (She’s loving every minute of it, I’m proud to report.)

If you’re left wondering how I continued my campaign of terror through high school and beyond, well, that’s another story. Part of it involves my forming a metal band called Entropy (all originals, thank you very much). We never made the charts, but we cut our own swath, for damn sure. I was also hopelessly lost in the world of horror fiction and film during that period. There was a lot of exciting work to discover in the 1980s, and I was beginning to dabble in the writing of my own twisted tales. Eventually I earned a degree in literature and started to publish. The rest is still being written.

At the end of the day, my music may have succumbed to my writing, but I still think Entropy was a hell of a good name for a band. Just like I still think Alfred Hitchcock was a sadist at heart.

To the whims of the Reaper’s scythe, then, we raise our goblets high and offer this toast: may our shortcomings be judged lightly; may our wrongdoings be accounted for in fairness; and may our gestures of compassion and goodwill, however small, outweigh them both in the end.

TODAY’S GIVEAWAY: Halloween Haunts contributor Christopher Alan Broadstone is offering one e-book of copy of Suicide the Hard Way: And Other Tales From The Innerzone. Enter for the prize by posting in the comments section. Winners will be chosen at random and notified by e-mail. You may enter once for each giveaway, and all entrants may be considered for other giveaways if they don’t win on the day they post. You may also enter by e-mailing membership@horror.org and putting HH CONTEST ENTRY in the header. 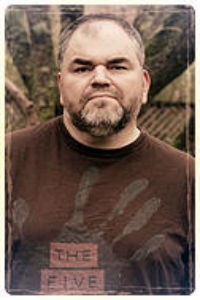 MESLING’S silhouette can, on rare occasions, be glimpsed prowling the watery byways of Seattle, Washington. When not writing (or reading) frightening fiction, he composes acoustic guitar and electronic music, produces the eclectic Bare Knuckle Podcast, dreams up new ways to scare the bejesus out of his fiancée, and revels in bike rides with his daughter, whose nickname is taken from a character in a Boris Karloff film. Follow his blog and subscribe to his newsletter at