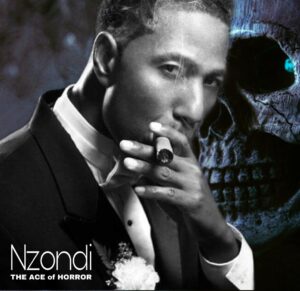 Nzondi (Ace Antonio Hall) is an American science fiction and horror author. His novel Oware Mosaic won the Bram Stoker Award for Superior Achievement in Young Adult fiction. His latest novel, Lipstick Asylum, won Book of the Year and Thriller of the Year awards from SW Book Reviews. It also received a 5-star rating from Readers’ Favorite. Among his many short stories that were published in anthologies and print magazines, Hall’s short story, “Raising Mary: Frankenstein”, was nominated for the 2016 horror story of the year for the 19th Annual Editors and Preditors Readers Poll. Additionally, three of his short stories were on the Horror Writers Association Reading list for the 2017 Bram Stoker Awards. A former Director of Education for NYC schools and the Sylvan Learning Center, the award-winning educator earned a BFA from Long Island University. Hall currently lives bi-coastal in New York and Los Angeles.

Hands down, it was my father, Chris Acemandese Hall. He was a songwriter, artist, activist and author. As a songwriter, he penned the jazz classics, “So What” and “Bitches Brew” sung by vocalese great, Eddie Jefferson. As an artist, you may have seen his works from Let’s Celebrate Kwanza, Melanin and Me, the Lost Books of the Bible and Budweiser’s Great Kings of Africa promo where he did the Hannibal poster, the Ethiopian who led a Carthaginian army and a team of elephants against Rome in the Second Punic War. As an author, he was responsible for creating Little Zeng, a character I’m now developing in my new horror novel. Little Zeng was the first published African Griot superhero. He was published three years before Black Panther who Marvel introduced in July, 1966.

Dad also co-founded an activist group called AJASS (African Jazz Art Society & Studio), along with Elombe Brath and others. Among starting the Black is Beautiful ideology with the Black Arts Movement, featuring the Grandassa Models, AJASS’s influence in the African-American diaspora not only affected civil rights leaders, as well as poets, musicians, photographers, models, artists and singers, it influenced every cell in my body.

I really can’t explain it, except maybe it was cosmic. Since as far back as I can remember, monsters have been in my imagination and my life. I remember once when I was seven or eight years old, I came outside our home in Elmont, New York, to get the milk bottle (yes, the milk man delivered back then) and saw a trail of blood down my steps. I followed it down to the front of the house and realized that there was a trail going to every house. I imagined that some ghoul had tried to get into our house and that was it, I became a storyteller right there on the spot. Ask me about the Monkey Man and the Witches Path, one of my first stories.

I make a conscious effort to defile Black stereotypes to the point that I might rely on extremism to resist them, even in my daily living and lifestyle. More specifically in my works, I’m committed to reverse certain tropes, if you will: black being the color for evil, the antagonist wearing black or dark skies being the motif whenever a character is frightened or having a gloomy day. In my works, I point out that black is dominant in symbolizing religion or holiness (priests, nuns, Holy Bible) and prestige/class (tuxedos, limousines). I have an entire species of characters that refer to God/Goddess as the Dark One, referring to a deity that is mysterious and hard to see; one who a person can only see once they focus on their inner light and find enlightenment. And dark skies? They’re a symbol for love and romance, good times and teen parties.

Also, taking a subtle approach, I’m infusing African culture and words into my works in such a way that it doesn’t seem unique but more of a norm. This is, and continues to be, a great challenge because I don’t want things to be a dead giveaway by using languages or words from African languages. Again, My commitment is to expose ways of life, ideologies and cultural values of the African diaspora so subtle in my works that readers welcome those customs into their own lives the same way that so many of my tendencies come from reading them over and over again in my favorite character’s actions.

and the only way to do that is to develop interesting stories that don’t preach or teach but reach out and suck the readers into a world they can escape in, fantasize in, or just live through a character’s adventures.

Since a teenager, pain and horror has been a part of my life. At nineteen, my first wife died five days after we got married. And you know what we saw on our honeymoon weekend? Nightmare on Elm Street. Once a horror fiend always a horror fiend. But it was that pain, and the many, many more horrific tragedies that I endured, and then pouring that anguish, that terror, that bitterness, that anger and confusion abut life into writing horror, and also reading it, most importantly reading it, that showed me that the greatest written characters find a way to fight through their fear.

If fortune favors the bold, then horror exploits the weak. Truly, if it had not been for the horror in many of my favorite author’s lives, the world would not have known their incredulous works. In my books, Oware Mosaic and Lipstick Asylum, I put my main characters in as much torment and pain, possible. Horror taught me that!

More in film and television than in books. I believe the quality of horror literature has always been outstanding. However, with films like A Quiet Place, World War Z, Get Out and Lovecraft Country, we’ve seen the horror genre make leaps and bounds into not only the mainstream but the best-stream.

I think the genre will continue to evolve, allowing Black characters of all ages, genders and shapes to become the protagonists. What Lovecraft Country did with its characters was not only groundbreaking, in my opinion, but opened the door for writers to portray character in ways we’ve never seen before. It’s exciting!

One of the best horror books I’ve ever read was Fledgling by Octavia Butler. It also features one of my favorite characters, a fifty-three-year-old woman named Shori who appears to look like she’s ten. It’s an unsettling but amazing story that shows a character braving through the horrors done to her and her people. Another favorite character is Mother Abigail from the Stephen King’s Universe. Another from that universe, Dick Holloran, from The Shining/Dr. Sleep has always been one of my favorite characters. A character who, like the other two I mentioned, faces the cruelty of men and their prejudices with a resilience that allows him to mentor and help others facing the horrors of the world. And I couldn’t complete this paragraph without mentioning my favorite character in film and television, Eric Cross Brooks aka Blade. I read and collected a ton of spider-Man comics so I wasn’t introduced to him in the comic book world until Wesley Snipes portrayed him in the David S. Foyer flicks. I still study that intro scene of the first movie. It was the first time, besides my father’s Little Zeng, that I saw an African-American superhero with martial arts ability. The icing on the cake was that it was a vampire movie, too!