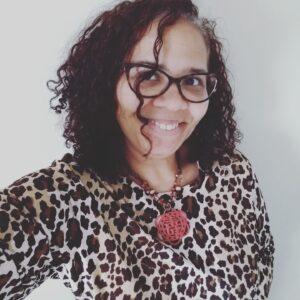 Michelle Renee Lane holds an MFA in Writing Popular Fiction from Seton Hill University and recently joined the faculty of the Speculative Fiction Academy. She writes dark speculative fiction about identity politics and women of color battling their inner demons while fighting/falling in love with monsters. Her work includes elements of fantasy, horror, romance, and erotica. Her short fiction appears in several anthologies and has been featured on The Wicked Library podcast. Her Bram Stoker Award nominated debut novel, Invisible Chains, is available from Haverhill House Publishing. Her nonfiction can be found at Medium, Speculative Chic, and in Writers Workshop of Horror 2.

I’m an only child. I grew up in rural Pennsylvania in the 70s and 80s. I spent a lot of time alone playing outside, reading, drawing, watching Public Television, and talking to imaginary friends that in hindsight might not have been so imaginary given the fact that my grandparents’ house was haunted. There were a lot of voices inside my head. I had conversations with people who weren’t there. Put on plays. Made up songs. And, I wrote stories. Stories about my stuffed animals, stories about the imaginary people, stories based on things I read or saw on TV. I guess that qualifies as fan fiction on some level. I liked books and stories, and it just always seemed like a natural thing for me to want to write my own.

Horror novels, movies and TV shows were always available to me as a kid. My family has a shared love of the genre and while I was growing up Stephen King, Dean Koontz, Peter Straub, V.C. Andrews and the like were passed around from household to household so that my grandmother, mom, aunts, and cousins all read the same novels and looked forward to the latest releases from these writers. In between Sesame Street, Mister Rogers’ Neighborhood and The Electric Company, I watched The Addams Family, Dark Shadows, The Twilight Zone, Night Gallery (I didn’t sleep at night much as a child), and classic horror movies including Hitchcock, Universal, and cult classics like Night of the Living Dead. So, what drew me to it was the familiarity. I take comfort in this genre because it was all around me growing up. I feel more at home watching a horror movie than a rom com, and I value any narrative that incorporates elements of horror without actively calling itself horror, because horror is all around us if you know where to look.

Most of what I read or watched growing up didn’t feature a lot of Black characters, but there were exceptions. I’m not sure when I decided I wanted to see more people who looked like me in the genre I loved, but if I wanted to see me in those stories, I was going to have to write those stories. I was aware of Blacula growing up, but no one seemed to be taking that movie very seriously. At least, not White people. And, I loved Morgan Freeman’s Dracula character on The Electric Company, but there weren’t a lot of Black leads in horror movies. I remember watching Night of the Living Dead as a kid and being simultaneously in awe while fearing for Duane Jones’ life. I didn’t worry about the zombies killing him, I somehow knew that by the end of the film he’d die at the hands of the White people. I hated to have my suspicions confirmed. And I didn’t know how to explain to my grandmother, a White woman, why I was crying at the end of a horror movie. So yes, it is important for me to have BIPOC characters in my fiction regardless of what genre I’m writing in, but I think it is somehow even more important when I’m writing horror. I constantly quote Tananarive Due like I’m flogging a dead horse, but she’s right. “Black history is Black Horror.” I don’t necessarily have an agenda when I write, but my stories feature BIPOC characters who are usually dealing with some aspect of identity politics and fighting to navigate racial or gender inequality and the inherent violence that comes along with it. Is the monster in all of my stories White Supremacy? No. Well, I mean, probably not.

Writing and reading horror has helped me tap into repressed trauma from my childhood and become more conscious of the unhealthy patterns I keep repeating in my romantic relationships. There’s a reason why I write about vampires and am obsessed with consuming as much fiction as I can about them. Horror fiction has helped me gain a better understanding of society in general and made me feel closer to people who connect with horror as writers and consumers of the genre in the same way. In many ways, it is a genre of healing that allows us to explore our darkest moments, speculate the worst possible scenarios, and exorcize our own demons on the page. Have a repressed childhood memory? Try writing horror. It will show up at some point as a monster or some other terrifying entity to help you unburden your psyche. Writing horror has also given me access to a community of BIPOC writers I wouldn’t have met otherwise. These brilliant, creative, supportive and caring people are now part of my tribe and I couldn’t be happier.

I feel like the genre is getting smarter. Or, maybe it’s better to say that there is a renaissance within the genre to return to a more academic or artistic aesthetic thanks to movies like Get Out, The Ritual, Hereditary, The Witch, and shows like Lovecraft Country, Them, and Watchmen, and novels like Mexican Gothic, The Year of the Witching, and The Deep. When I was a kid watching Creature Double Feature and renting indie horror movies at my local video store, there were a lot of movies made to either gross you out for the sake of being gross, or there was some twisted morality lesson based on Puritanical ideals about sexual conduct, and don’t get me started on the limited roles and stereotypes for women and POC. While I love Michael, Jason and Freddie, (with my personal favorite slasher movies being Terror Train and Happy Birthday to Me), slasher movies weren’t exactly an enlightening artform. Don’t get me wrong, they still play an important part in the evolution of horror as a genre and gave us the concept of the final girl, but I preferred watching older movies like M, The Golem, Nosferatu, The Cabinet of Dr. Caligari, The Man Who Laughs, Carnival of Souls, Repulsion, you know, movies that are beautiful and horrific at the same time. Lately, a lot of the horror I’m consuming by women and BIPOC writers usually require me to put on my thinking cap while I’m getting creeped out and that excites the hell out of me.

Historically, there are a lot of negative and racist stereotypes when it comes to representation of Black characters in the horror genre, but as more Black writers and filmmakers create narratives within the genre, those images are changing or being reclaimed to tell horror stories from the POV of Black people. One of the best examples that comes to mind for reclaiming racist imagery is the use of Topsy and Bopsy in Lovecraft Country. These two monstrous representations of the racist caricature of the pickaninny that appeared in mainstream culture throughout the 19th and 20th centuries as dolls, in advertising, and were popularized by Harriet Beecher Stowe’s 1892 novel, Uncle Tom’s Cabin, are reclaimed by the writers of Lovecraft Country to highlight anti-blackness in episode 8, “Jig-A-Bobo.” This was one of the most powerful episodes in my opinion and the only episode that terrified me. I slept with the light on after watching it. Much like Diana, I didn’t realize I feared these racist caricatures until they were presented to me in such a horrific fashion and made me examine my own feelings about body image and White Supremacist ideals of beauty. It solidified for me my belief that my fears as a BIPOC woman aren’t the same as the fears shared by most people in mainstream culture. By seeing more of what BIPOC writers fear within the genre, it creates space for more BIPOC people to tell their stories, and hopefully, opens space for discussion and enables more connection between people within the horror community.

There are some obvious ones that I simply must mention: Toni Morrison, Tananarive Due, Jewelle Gomez, Octavia Butler, Zora Neale Hurston, Linda Addison and Nalo Hopkinson just to name a few of the writers who inspired me to take my writing more seriously. And, you should definitely check out Victor LaValle, L. Marie Wood, R. J. Joseph, Nicole Givens Kurtz, Aziza Sphinx, Marc Abbott, Stephen Van Patten, Todd Sullivan, Sumiko Saulson, and so many others.

Bring your personal brand of weirdness to the page. I want to meet your demons. I want to be made to feel uncomfortable about how much you love vampires and werewolves. I want to see the monsters that frightened your great grandparents and the cultural superstitions that haven’t been white washed by American society. Tell me about the thing that scared you the most when you were a kid and why it still haunts you to this day. Write about race and sex and class and trauma and politics and religion and don’t pull any punches. I want to laugh, cry and clutch my pearls while you’re trying to scare me.

Be authentic. Whatever that means to you as an individual. While there are shared experiences among BIPOC writers within the African diaspora, if you put me in a room with nine other Black women and give us the same writing prompt, all of our stories will be different. There may be common themes or archetypes, but each one of those stories will have its own unique voice and impact. Just like there is no monolithic “blackness” in the world, there is no one way to be a Black writer. We all have stories inside us that differ from person to person even though we may be connected by a shared past and present. No one else can write YOUR story.