Black Heritage in Horror: An Interview with Tananarive Due 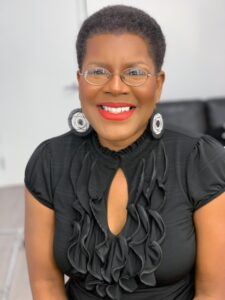 TANANARIVE DUE (tah-nah-nah-REEVE doo) is an award-winning author who teaches Black Horror and Afrofuturism at UCLA. She is an executive producer on Shudder’s groundbreaking documentary Horror Noire: A History of Black Horror. She and her husband/collaborator, Steven Barnes, wrote “A Small Town” for Season 2 of Jordan Peele’s “The Twilight Zone” on Paramount Plus, and two segments of Shudder’s anthology film Horror Noire.

A leading voice in Black speculative fiction for more than 20 years, Due has won an American Book Award, an NAACP Image Award, and a British Fantasy Award, and her writing has been included in best-of-the-year anthologies. Her books include Ghost Summer: Stories, My Soul to Keep, and The Good House. She and her late mother, civil rights activist Patricia Stephens Due, co-authored Freedom in the Family: A Mother-Daughter Memoir of the Fight for Civil Rights. She and her husband live with their son, Jason.

I’ve always been a writer. One of my earliest memories is folding white paper in half, drawing stick figures and captions, and titling the book “Baby Bobby.” On the back, I wrote “Baby Bobby is a book about a baby. The author is Tananarive Due.” I spelled a bunch of the words wrong, but BOOM. I came into this world understanding that I was a writer.

My late mother, Patricia Stephens Due, was a civil rights activist who suffered trauma at the hands of police when she was an activist in the 1960s. She was also the first horror fan in my life, which I consider directly related. So many people who have suffered trauma are drawn to horror, and my mother was no exception. So she was always watching horror movies, including the old Universal classics like The Wolf Man, Dracula and The Mole People. She also gave me my first Stephen King novel, The Shining, when I was 16. So King helped me understand that horror could be literary, not just cinematic – and although I hid it for myself for a long time, that was the kind of writing I wanted to do. When I say I hid it, that’s because I didn’t understand until I was out of college that I hadn’t given myself “permission” to write horror as a Black woman.

I would have to say the effort WAS conscious. I got an M.A. in English literature from the University of Leeds in England, and as an international student myself that was the first time I found myself surrounded by African students from Ghana, Nigeria and South Africa. I have to admit that there were times I’d felt outcast in Black circles at home, since I was called “Oreo” in elementary school, and it truly felt like a homecoming to me. I also specialized in Nigerian literature, and I was so inspired by the works of Wole Soyinka, Chinua Achebe and other writers that I do believe I carried a bit of that experience back with me.

In my first novel, The Between, Dede’s mother is Ghanaian. My Soul To Keep centers Ethiopian immortals. Between my grad school experience and my first name from Madagascar, I’ve always felt a sense of Diasporic kinship. I have no patience for Diaspora Wars.

The biggest thing I’ve learned is that I find the real world much more frightening than anything I can write about in my books. I can’t watch or listen to true crime stories because I’m so appalled by human evil. Writing horror has taught me how to compartmentalize the things I find most scary in life into bite-sized pieces that can help me and my readers get our emotional bearings and keep on going.

I didn’t know any Black horror or science fiction writers during my formative years, so today’s young aspiring writers have so many more dreaming options in terms of imagining themselves writing genre. That has been growing steadily over the years with the rise of Afrofuturism and the love for Octavia E. Butler, but horror in particular seems to be in the midst of a Renaissance, in large part because of Jordan Peele on the cinematic side, but also writers like Victor LaValle.

Our representation in “mainstream” horror and science fiction has often been tropey and stereotypical, so there’s a big difference when Black creators have the opportunity to tell their own stories rather than being reflected through a lens of whiteness. This is still an area where we have to fight, especially in Hollywood, where there’s still this idea that studios or streamers can simply replace white characters with Black characters in scripts to try to capitalize on Black overrepresentation among horror fans. Or have their white screenwriter friends simply write their own versions of Black characters, which tend to be limited by familiar tropes. We need a fully sustained effort to keep the doors open to Black and marginalized horror creators who have the freedom to tell their stories their own way.

OK wow–I have to say Candyman first, although Dr. Robin R. Means Coleman describes the original film as “Blacks IN horror” in her book Horror Noire: Blacks in American Horror Films from the 1890s to Present. The film is problematic, but Tony Todd’s Candyman still looms large as a scary, scary villain. I love Melanie in The Girl with All the Gifts. I love Ben/Duane Jones in Night of the Living Dead. And of course Chris in Get Out!

I’m not an expert in African horror per se, but I have enjoyed short stories by Nuzo Onoh, who calls herself the Queen of African Horror. We’re in an upcoming anthology called AFRICA RISEN: A New Era of Speculative Fiction, co-edited by Sheree Renée Thomas, Oghenechovwe Donald Ekpeki, and Zelda Knight.

The advice I would give to horror writers is the advice I give to all writers: start SHORT. Too many learning writers try to start with novels and novel series before they have learned how to craft strong scenes in fiction. Starting short is a great way to grow your craft while producing publishable work on a much faster basis.

Same to the Black writers! With the added advice that you might be surprised at what a colonized view you have of your own writing, or the kinds of stories you might imagine with Black characters. Write from within, not from without. Learn to write authentically before you begin thinking about the marketplace. Authenticity is what sells.