Black Heritage in Horror: An Interview with Jamal Hodge 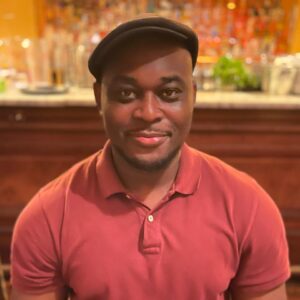 Jamal Hodge is a multi-award-winning filmmaker and writer who is a sitting Board Member of Harlem Film House and Axs Lab. Hodge is an active member of The Horror Writer’s Association and The SFPA, being nominated for a 2021 Rhysling Award for his Poem ‘Fermi’s Spaceship’ and a 2022 Rhysling Award for his poem ‘Loving Venus’. While his poem ‘The Silence of God’ placed in the 2021 Horror Writer Association Showcase. His Poetry is Featured in the Anthology Chiral Mad 5 alongside such legends as Stephen King, Langston Hughes, Linda Addison & Josh Malerman. Jamal’s screenplay ‘Mourning Meal’ won 5 awards (including best short screenplay at NYC Horror Film Festival 2018) while his poetry is featured in the historical all-black issue of Star*line Magazine (issue 43.4) and has been featured in SPACE AND TIME Magazine, PENUMBRIC Speculative Fiction Magazine, amongst others.

I wanted what most suffering people want– a future full of the validation of our worth.

Pain and wonder. I’ll explain my dramatics. LOL. What I mean is I started writing ever since I was 6 years old and I got my first story published when I was in 5th grade. But when I really connected to the wonder of escaping the seen into the unseen and reporting back was when I was taken from my mother after a harsh stint of homelessness and tossed in the abusive foster care system. From then on for a long time, I became a daydreamer and a loner, finding respite from my pain and depression in the exploration of fantasy worlds, on the back of a dragon or in the belly of a starship. I wanted to get away from the present into a future where little black kids could topple corrupt systems of oppression or be the deciding factor in the fate of stars. I wanted what most suffering people want– a future full of the validation of our worth. In the writing of stories, I could give that not only to myself but also to others… turning my pain into others’ hope.

Horror allows us to be honest. Blatantly so. Painfully so. Unapologetically real about the simple fact that suffering and fear are two of the universal languages of life– it’s the meaning that we connect to them and our acceptance of them that defines a major part of how we walk in this world. All of this is at the heart of horror. Not jump scares and campy laughs but challenging of perspectives we hold dear or never considered in revelations of blood. I love that shit about it. And that’s what drew me to the genre. In horror, I could ask complex questions about human nature in deceptively simple themes. I could steer the audience to coming to grips with harsh truths and the reality of the ignored, the mishandled, the trampled, the cruel– we can make you see yourself in the monster, the bully, the victim, and hopefully have you leave entertained but shaken by compassion. Yes, I believe the genre of Horror, when handled properly makes the case for compassion, courage, and hope more than any other genre in cinema.

Of course. But not fanatically so. I’m not the kind of director/writer that just because I’m black all my leads have to be black in all my movies or stories, although I commend and understand the directors that take that approach since for the longest time in this country people of color haven’t had the right to control their own images and now there’s such a gap that we’re playing catch up in having the wonders of our folklore and culture and perspectives told. For me though, I let the story dictate the race of the characters. That’s my approach. I mean a mom in the suburbs that eats little kid gentiles— to me that’s some white shit. I cast that as a black person and no one would believe that shit, let’s be honest.
Most of the themes in my stories is about how the fear of suffering is the source of all evil, the redemption of one’s suffering into greatness, and how choice is the greatest form of love. I try to use darkness to show light. And to use my imaginings of the future to show black people we have a future divorced from the paradigm of our present. We can be the heroes, the policymakers, the pathfinders of the stars. We can rebuild Eden.

Strangely Horror has taught me that all the good and bad in the world is simply an effect of the inside state of a person. The world is beautiful and like most beautiful things it’s a dangerous fickle bitch. But it’s that for everyone, it’s our interpretation of that fact that creates most of the horror in the world. Basically? We’re all victims and we’re all victimizers, that’s the true horror is it not? So horror has taught me that about the world and about myself– we’re all pretending we know shit but we have no certainty other than pain and death and temporary moments of pleasure, and fleeting glimpses of understanding… so doesn’t that mean we all are deserving of a little compassion? If everyone is hurting, can’t we all find some corner of forgiveness and redemption?

I feel like the genre has shifted. There are a lot more People of Color on screen and now they usually don’t die first and don’t just say random slang or coonish jokes in the middle of fighting for their lives. So I guess that’s progress. I mean, in novels there has always been a respite from the fuckery in film. Octavia Butler’s characters are some of the most three-dimensional characters you can find in the genre period. I mean, in the world of books, black characters written by black authors have been layered and nuanced for decades. That’s why it’s so important that we keep telling our own stories from our own perspectives. I feel at this rate the evolution will expand even more to show that black people aren’t a monolith and neither are our fears, hopes, or imaginations. Black will be proven to be diverse in perspective and thought. More diversity within the diverse.

Tananarive Due has a great documentary on this subject called Horror Noire on Shudder. You should check it out when you get the chance! But anyway, I hope there will be changes, and thanks to storytellers like Jordan Peele and others there have been. Man, I can’t tell you how happy I was when LL Cool J survived the whole damn movie in Deep Blue Sea, I mean even the little white girl got her ass eaten. I want to see more of that. Lol.