A Point of Pride: Interview with Steve Berman 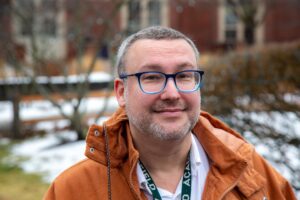 Steve Berman is the Lambda Literary Award-winning editor and publisher behind Lethe Press, one of the oldest queer and weird publishers around. He has sold over a hundred articles and short stories. His novel, Vintage, about an adolescent boy who meets the ghost of his dream and discovers this leads to nightmares, was a finalist for the Andre Norton Award. Steve released a collection of gay horror stories last year–Fit for Consumption received a starred review from Kirkus and praise from Library Journal and Publishers Weekly. Steve works for Deerfield Academy, an eminent boarding school in Western Massachusetts. There may be murderous cats sharing his home address.

In elementary school I would write up the most dreadful stories about secret agents. The class and teacher would groan when I started to read them aloud. And yet, this did not discourage me. And when I discovered Dungeons & Dragons, I learned the basics of storytelling—because that is what Dungeon Masters needed to do, they needed to be Homers and Scheherazades at the dining room table while everyone rolled dice and gorged on snacks and clamored for the night’s entertainment.

I grew up with monsters. My mother loved old movies from the 1930s and 1940s, including the monster movies. She would sit me down on the sofa beside her, and together we would be thrilled by black-and-white ghouls and fiends. I would devour books on classical mythology, not because of the deeds of demigods but rather the weirdness of the chimera and the many-headed dragon that guarded golden apples. I guess I was a weird kid, by the standards of the day. Or maybe I appreciated what was clearly unnatural things because I was sickly and felt different from so many of the kids in the neighborhood.

Yes—in fact, these days I almost never write heteronormative fiction. Straight readers have so much media to choose from—they are constantly surrounded, immersed in a world that engages with them, reinforced their experiences and supports their storylines. But queer folk (sorry if that term offends, but over the years I have grown most fond of the word) do not have such luxuries. The older I become, the more I want to delve into fiction that offers gay men who aren’t often portrayed on the page, on the screen, as others. I like the flawed men who make mistakes when confronted with terrible situations (and sometimes creatures).

I suppose I’m more aware now about how important ghost stories are. I have been at social events where someone has asked what I write, and if I respond with “Horror,” there is a very good chance I’ll see their expression of distaste or hear mention of how they dislike such stories. But, if I respond with “Ghost stories,” suddenly the conversation swells and paradoxically more intimate, as they take me into their confidence by telling me about the one time their sibling thought she saw something strange out of their corner of their eyes, or about the room in their last apartment or workplace that was so creepy that it could only be haunted. Ghost stories are universal because they need not be terrifying; a ghost story is unnerving not because it’s a brief brush with death but because it’s a glimpse that there is something other than death occasionally accessible to us. Not to mention: people love to tell horror authors about their own ghosts, much like that man on the party asking the doctor he just met at the bar about this lingering pain….

I try not to think too much of the genre’s trends. I don’t want to limit either what I read or write.

I must admit I am fascinated with essays utilizing queer theory to explore works of horror that most readers would consider “very straight” classic works of horror. A number of academics have applied this to Robert Louis Stevenson’s Jekyll and Hyde as well as Stoker’s Dracula. I feel that such examinations are perfectly valid as I bring my own perspective (a very gay one) to everything I read or watch or hear.

While the number of queer-themed contemporary horror fiction has grown over the years so it is very possible to fill several bookshelves with just new releases, I do wish more LGBTQ readers would familiarize themselves with older works—I’m frustrated with tweets and posts that present and celebrate queer horror as a twenty-first-century phenomenon, ignoring the great efforts of of many authors. Before there was Clive Barker and Poppy Z. Brite, horror fans could delve into the Gothic storytelling of Francis Lathom or Forrest Reid, the Southern macabre of Michael McDowell, or the vampires of Jewelle Gomez and Jeffrey McMahan. To deny their existence is wrong.

Danny Glick and Mark Petrie from 1979’s Salem’s Lot will always haunt me. I watched the television movie at home. Likely, I was wearing the same style of pajamas as the boys on the screen. I was on the edge of adolescence and could not parse all of the homoeroticism of one brother mesmerizing, seducing really, his older sibling, and then the second attack: two handsome boys in the bedroom, one floating, not like some bat-winged horror but rather with the panache of Peter Pan, and Mark sorely tempted to accept Danny’s hungry mouth on his bare neck. I was enthralled, aroused without benefit of understanding.

I do think Clive Barker’s work deserves repetitive reading. I recommend queer readers start with “Pig Blood Blues.” Another British horror author I very much admire is the late Joel Lane, who wrote these powerful stories of men struggling with their desires as much as the brutal environment surrounding them, namely the rust-belt cities of the Midlands.

I do appreciate the good intentions of horror writers who are not part of the queer community are including LGBTQ characters in their work. But… I would ask these writers to make sure these characters are not just “queer within a vaccuum”—I’ve read many stories that have failed to make these characters truly whole, i.e. three-dimensional. Too often a queer sensibility is lacking, one that exists because LGBT individuals exist on the fringe of most cultures. Mindsets are very different. If the only queer thing about a character is, say an attraction to the same sex or identifying with a gender that is non-binary, but these characters are otherwise identical in perspective as the cis-gendered heterosexual characters on the page, you failed me.

I encourage you to write about yourself at the start. Not because of the old adage of “write what you know”—after all, you are going to one day discover all sorts of things about yourself. Some utterly messed up things, and some amazing things. I think the benefit of using some of your life, your person, in the initial drafts of a story is that you are grounding yourself. No matter what horrible things you imagine—supernatural horror, psychological horror, even body horror—
start by being authentic and then layer on the dreadful stuff. Revision will remove some things, add some others, but you’ll remain very invested in your story because of its close ties to your life. Sometimes that investment is the only thing that can erase the doubts and keep you on engaged to finish a story.