A Point of Pride: Interview with Nisi Shawl 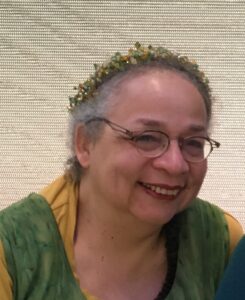 Nisi Shawl co-authored Writing the Other: A Practical Approach, a standard text on inclusivity.  Their debut novel, an alternate history of Africa’s Congo region, was a Nebula Award finalist.  They wrote the Otherwise Award-winning short story collection Filter House, and edited the acclaimed anthology New Suns: Speculative Fiction by People of Color, winner of the World Fantasy, Locus, and Ignyte awards.  Their most recent story collections are Exploring Dark Short Fiction 3: A Primer to Nisi Shawl, and Talk Like a Man.  Shawl’s forthcoming titles include Speculation, a middle grade historical fantasy about redeeming a family curse; and Our Fruiting Bodies, a horror and dark fantasy collection.

The answer to that question is lost in the mists of time.  Really, I’ve been writing for over 50 years.  At the age of thirteen, my best friend and I made up our own version of the Wizard of Oz and wrote song lyrics satirizing our teachers.  At the age of fifteen I wrote a post-apocalyptic romance.  As a child I aspired to be a magician–a *real* magician, making *real* magic.  But another career I considered, one which I confided to our elementary school’s counselor, was etymology.  Writing is sort of a mash-up of these two paths.

My affection for horror is a very late-blooming sentiment.  Though my forthcoming collection, Our Fruiting Bodies, is primarily horror, I’m still not sure that a lot of what I write belongs to that genre.  “Vulcanization” is deliberately a horror story; it’s written from the viewpoint of Leopold II of Belgium, so it couldn’t be anything else.  I conceived of “Cruel Sistah” as horror from the start.  It’s an Ebonics retelling of a rather bloodthirsty 16th-century Scotch ballad.  But I’ve heard people categorize “The Rainses’” and “Wallamelon” as horror, which surprised me.  Sometimes I think there’s a racial component to the way that label gets attached.  I mean, just because there are dead people, don’t assume they’re supposed to scare you.  Ancestors are dead and not scary.  Well, not overwhelmingly scary.

I don’t think anything really drew me to the genre of horror.  I think I woke up and found myself there.

Of course I include LGBTQ material.  It’s part of the world I experience.  I include it without question, the same way I include transportation and surgery and music and weather and everything else I encounter.  That’s not an “effort” on my part, conscious or otherwise.  It’s simply good craftsmanship.

For a while there, published horror fiction was dominated by one big-name author: Stephen King.  As a used book dealer I also sold books to a fairly large audience interested in older works put out by Arkham House and other collector presses.  But these days the field is filled with a diversity of writers from different backgrounds, writers identifying as queer or BIPOC or disabled in a number of ways.  It’s a richer field, and a better-populated one.  And it’s expanding!  Horror’s boundaries are being interrogated, stretched, penetrated, and reset.  That’s one of the reasons I’m considered a horror author now: because horror’s self-definition has broadened to encompass my work.

I hope this trend continues.  I expect it will.  Our audience will remake the term into one that serves them, that validates how they will take pleasure in the consumption of what they call horror when and where they find it.

I don’t feel qualified to answer the first part of this question.  I’m not deeply read in the genre, and there are centuries of history to consider when examining our representation.  Of works I’ve read, I enjoyed the Victorian vampire novella “Carmilla” by Sheridan Le Fanu, though his lesbian monster meets an unhappy end.  More recently, happiness is more often shown as attainable for LGBTQ characters, and that’s the sort of representation I want to see increase.

Does Octavia Butler’s heroine Shori count?  Shori is the bisexual vampire protagonist of Octavia’s last novel, Fledgling.  But because she’s a natural rather than a supernatural being, some may quibble about my choice.  Is Fledgling horror?  I refer you to my earlier answer about the expansion of the genre’s definition.

I’m also fond of the romantic pair at the heart of Cynthia Ward’s Bloodthirsty Agent series: Lucy Harker and Clarimel Karnstein.  Lucy is the daughter of Mina Harker, a dhampir–a half-vampire, and Clarimel is basically the aforementioned Carmilla.  But again I run into problems with the books’ classification, because they’re marketed as steampunk adventure, not horror.  And they give significant nods to the literary landscapes of Conan Doyle’s Sherlock Holmes, Edgar Rice Burroughs’s Tarzan, and many other fictional playgrounds.

I have a serious flirtation going on with Jewelle Gomez’s Gilda, who I was introduced to via the easily-categorized-as-horror Gilda Stories.  No one’s going to fight me about that choice, I’m sure.

Then there are my true loves: the characters I put in the horror I’ve written my own self.  There’s Belle, the lesbian letter-writer of my epistolary novelette “The Tawny Bitch.”  The disabled protagonist of “Luisah’s Church” is a lesbian, too.  Brit Williams, protagonist of the three-story horror series comprised by “Street Worm,” “Queen of Dirt,” and “Conversion Therapy,” is asexual–but some of her young charges are gay.  In “She Tore,” my Wendy Darling is a bisexual race car driver in a love triangle with a female fairy and a gender-fluid shapeshifter.  I adore all of the above.

First and foremost, Jewelle Gomez.  Her body of work is enormous and enchanting and dark and delicious.  Second, I recommend reading the horror volume of the Bending the Landscape anthology series edited by Nicola Griffith.  Not every contributor identifies as LGBTQ, but the Table of Contents includes a sizeable sampling of those who do.  Third, look up a couple of newcomers: Evan J. Peterson, who has created some slapping short stories, poems, and games; and Tlotlo Tsamaase, a brilliant and disturbing Motswana author who tells tales which are simultaneously gentle, weird, frightening, and hopeful.

Go there.  Even if you think what you want to write is too strange, too subtle, too brash, too sexual, too nasty, too quiet, too loud–too whatever.  Give yourself permission to go where the story wants to take you.  Figure out later who’s coming with you, who your readers are, and how you’ll find them.