A Point of Pride: Interview with Dan B. Fierce 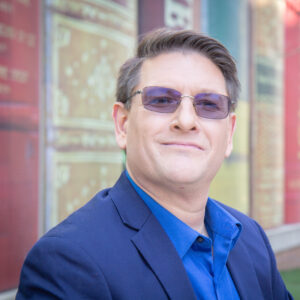 Dan B. Fierce loves humor and horror alike, and many things in between. A long-time fan of authors like Stephen King, Dean Koontz, and Edgar Alan Poe, he lets his darker side come out in the macabre, “Revenge,” demonstrates the tension caused by the corona virus with “Mistaken,” and gives the reader a taste of dark humor with “Warning Shot,” all contained between the covers of the 2020 Indie Authors’ Short Story Anthology. His suspense-filled story “Abandoned Bikes” was published in Crimes and Culprits: An Anthology by the Indie Author Group. Both books were put out by Heathory Press.

He has over twenty years of experience writing stand-up and sketch comedy, and over 10 years of competitive creative writing in online forums. His work can be found  in the archives of various wrestling-based  “E-Federation” websites, such as XWF, WGWF, and PCW, with beloved characters such as “The Lunatic,” “The Fabulous One” Dan Fierce, Nathan Saniti, and Joey “The Handyman” Handy. He has also had some opinion pieces published in KC Lifestyles Magazine.

Links to my social media:

I’ve enjoyed writing ever since middle school, where we got into creative writing. Making up stories was great fun for me, and a form of art that I could really embrace. I even ghost wrote a horror story for a friend in high school that got a pretty good review from the teacher. Later in life, I joined what are termed “e-feds.” (Basically, think fanfiction for wrestling fans. We make up characters and write stories and wrestling promos. The persons with the best story score won their match.) After ten years of that hobby, I hung up the e-boots and decided to pursue becoming a published author.

Reading Edgar Allen Poe for a class assignment as a kid, I found that I truly enjoyed so many of his short stories like Tell-Tale Heart, The Cask of Amontillado, and the Masque of the Red Death. In middle school, I discovered the then-blossoming career of Stephen King. I read Cujo, and absolutely loved it. Since I have always had a shorter attention span, I tended to gravitate towards short stories. King’s collections like Skeleton Crew and Four Past Midnight cinched it in for me.

Currently, with my catalog still somewhat small, I haven’t inserted a lot of LGBTQ characters into my works yet. I do have plans on representing as many of my brothers and sisters as I possibly can in the future, but I need to research beyond my own experiences as a gay man to make certain that I get the representation correct. If I’m honest, I’m a tad apprehensive about doing it, because I worry that I’ll get it wrong and anger those within the community.

Since I have those fears, I simply play it safe for now. I can push boundaries a bit later. It may seem a bit cowardly, but I want to dip into this cautiously so that I have staying power. But don’t worry. I have plans on bringing the whole spectrum of the community into my works throughout my career.

Despite what I just said, I have learned that there is an audience for nearly any kind of story anyone would want to write. The trick lies in finding that audience. For instance, if you write “extreme” horror, then there’s a great community and sales platform called Godless.com that sprung up a little over a year ago that has a little bit of everything on it.

As for what it taught me about myself, I learned early on into the classes I had been taking through Mid-Continent Public Library that self-publishing would be the more likely route that I would take, since I haven’t the patience for the traditional publishing route. I’m more of an “instant gratification” kind of guy. What can I say? The internet age has spoiled me.

Compared to today’s standards, some things have remained the same, like the “formulas” for a good horror story. The content, however, is ever-evolving. Things that were taboo back in Poe’s day, became less so by the time Koontz or King came around, and things that writers penned even less than twenty years ago have become sensitive subjects.

I think, well, I hope that the public will stop taking themselves so seriously over time and realize that horror reflects society’s fears and happenings. It’s not meant to be a targeted jab at any one certain subset. At the same time, fiction in general, and horror specifically, have always been satirical in nature or made to drive certain points home. 1984, The Handmaid’s Tale, and Fahrenheit 451 come to mind. Even though they aren’t necessarily considered horror, they illustrate what could happen under horrific circumstances.

While I admit that I haven’t read a whole lot of recent work put out by some of my fellow LGBTQ authors (I’m a very slow reader and tend to lean more toward audiobooks) I’ve seen the amount of LGBTQ authors, particularly the self-published ones, become more mainstream and accepted. It does my heart good when I see them win awards.

Character-wise, again, I admit to lack of exposure on my own behalf, though I have been seeing a big boom in LGBTQ-based horror submission calls for anthologies and novels. I have a lot of “catching up” to do on my TBR pile to be able to honestly answer this.

My memory isn’t what it should be for these sorts of things, so my answer is rather cliché and limited, but the one that sticks out the most for me was Eddie Kasprak, from Stephen King’s It. Even though I don’t recall whether it was stated, it was at least inferred that he had an alternative relationship. If we’re talking about movies, then the most recent that were memorable were “The John’s” from Halloween Kills. They were very entertaining. (*SPOLIER ALERT* I admit that I was rooting for them to not die though.)

Again, I admit to being a very slow reader, but from the Facebook groups that I’m in, I’ve gleaned some great names that I have added to my TBR pile. Clive Barker, Lee Allen Howard, Hailey Piper, and Poppy Z. Brite are all in my queue. (I never even knew that Clive Barker was family until I began my own author journey.)

Write what you would want to read is the best advice that I’ve been given so far. Don’t worry about content because there’s an audience for everything. Do I recommend coming right out of the gate with sensitive subjects? Not if you want to have a long career in today’s highly charged atmosphere. But don’t let that stop you from writing it, either. Horror writing is a form of art, and as such, an expression of oneself and experiences. It’s hypocritical advice, but there it is. Tread cautiously, but don’t be afraid to give yourself the freedom you need. That’s what editors are for.

Don’t wait for your opportunities to come to you. Make them yourself. Glean information whenever you can and pass it on. Network with other writers, especially your fellow LGBTQ writers. Make friends with them, support them, even if you can’t buy their stuff. Be their cheerleaders, and they should also cheer for you. We’re all in this together. If we spend our energies being competitive and solitary, then we just spin our wheels. LGBTQ horror is going strong right now. Take advantage of it by helping others and yourself. Even introverts can do this easily through social media.

2 comments on “A Point of Pride: Interview with Dan B. Fierce”