A Point of Pride: Interview with Crystal Romero 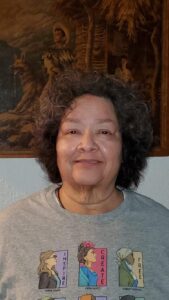 Award winning author, Crystal M. Romero, no relation to George A. Romero, writes Lesbian Speculative Fiction (aka: Horror). A graduate of San Jose State University, her first novel, The Veil of Sorrow, printed under the name Crystal Michallet-Romero was a Masters’ final project for a Gothic Literature class in which she was enrolled. It went on to win a Gold Crown Literary Society Award for Speculative Fiction and was nominated for a Gaylatic Spectrum Award. Crystal Fell in love with the zombie genre at a young age. She enjoys both film and television shows depicting post-zombie-apocalypse worlds. Despite this, Valley of the Dead is her first foray into the zombie genre. In addition to two novels, The Veil of Sorrow and Valley of the Dead, Crystal had five stories published in an LGBT 2008 flash-fiction anthology, Chilling Tales of Terror and the Supernatural.

When not writing, Crystal enjoys relaxing with a good book, especially mysteries, thrillers, horror, dystopic and post-apocalyptic novels. Crystal grew up in the heartland of Norther California. However, after living in the Silicon Valley for many years, she considers the high tech area her home.

I was always an avid reader from as far back as I can remember, and I blame this on my father who never believed in restricting reading according to age. I always tell friends that while my peers were reading Nancy Drew mysteries, my father had me reading authors like Bradbury, H.G Wells, Stoker, Lovecraft, and Matheson. I believe it was this early love of reading that began the stories swirling around my head. Despite this I never had the courage to share my writing until the mid-80’s when I started to read Star Trek Fan fiction. At the time I noticed that there was no ST lesbian femslash like there were for males. I apparently complained enough to a friend about this because he eventually responded, “Then write it yourself.” That started my foray into ST femslash and actually sharing it with the world of fandom. Over the decades my writing morphed from fan fiction to lesbian fairy tales and eventually original works that includes characters from the LGBTQ community.

I’ve always loved horror regardless if it was literature, film, or television. My earliest memories are of watching the old Boris Karloff and Vincent Price movies and staying up late to watch what I now know as a very campy show aired from San Francisco called Creature Features. There is just something exciting about stepping into the realm of horror and allowing yourself to be truly afraid.

Yes, inclusion or lack of it, is what encouraged me to begin writing. I’ve always wanted to see more people who were like me. So when I began to write original work, I made a conscious effort to include characters of all orientations, but especially lesbians. Not only do I make an effort to include LGBTQ characters in my work, but I also include people of color. In an upcoming short story, I’m including a female bi-racial lesbian and Filipino gay male character. In the story that will follow this one, I’ll be introducing a transgender female character.

It has taught me that no matter how creative we can be, no matter how much grotesque and horrific imagery we include in our writing, sometimes real life is more horrific than anything we could write.

The horror genre seems to be mirroring the films in that the writing has become more graphic. Whereas a simple line, or scene was once only dark and foreboding, more novels today build up the tension by including graphically horrific scenes or concepts. It’s something that I notice in novels, books that used to scare me as a teen don’t seem to have to same effect today when compared to today’s novels and I love it!

When straight horror writers first started including LGBTQ characters, they made them over the top. Either the men were very effeminate, or the women were described as overtly masculine. Often times these characters were described as the “monsters” of the stories, or tragic figures who were killed off early. It was the equivalent of the early lesbian novel, The Well of Loneliness by Radcliff Hall, where the main character was allowed to be a lesbian but in the end her only future was to end her life. This trend continued into the ’80s. It was only through indie lesbian/feminist presses where we could find female characters actually thriving. However those early works were mostly feminist lesbian romance books and horror was virtually non-existent. Thankfully today you can find a lot of horror novels written by authors who identify as LGBTQ.

The character Dillon Mitchell from Rita Potter’s novel, Upheaval, is one of my favorites. It is a post-apocalyptic novel that takes an entirely new spin on the sub-genre. I also love Katie, a bi character, that Rhiannon Frater has in her As the World Dies series.

I’m currently hooked on A Deadly Winter by Kody Boye. When it comes to lesbian authors, at the top of the list would be Rita Potter (Upheaval), Linda Kay Silva (The Horde), G Benson (Dead Lez Walking), Charlotte Green (Gnarled Hollow), Karen D. Badger (1140 Rue Royale), and Stephanie E. Kusiak (The House at the End of the Street). There are so many more lesbian authors that would literally take up a whole page, but these are the ones that stand out to me.

If you’re straight, don’t be afraid to include LGBTQ characters. I don’t believe that only lesbians can create a character who is in the LGBTQ community, but it’s important to be true to the characters. Don’t include an LGBTQ character just to be a token; you’ve got to really flesh them out like you would any other characters. Most importantly always remember that the LGBTQ community is just like those who identify as straight. There are good and bad people in every group. How you portray these characters is important to those of us who are reading your work. We don’t want to read a novel that depicts an LGBTQ character who is only evil or tragic or who gets killed off in chapter two because we’ve read those stories already. We in the LGBTQ community are no longer content to be the serial killer (Silence of the Lambs) or the character that is the first to die. Give us the same respect that you give the other characters you create.

Write. It doesn’t matter what you’re writing, just get your ideas down. It’s not just a cliché that practice makes perfect. If you only start with sharing your work with family or friends, or join a creative writing group, or even practice your skill by writing fan fiction and sharing it, that’s the best thing you can do.

I compare horror fans to adrenalin junkies. We love to open the pages with the expectation of being scared. We want the high of being frightened. It’s like a roller coaster ride. We want to experience that thrill and fear of being on that roller coaster, feeling the twists and turns and near death experience until the ride comes to an end and we step away with a sense of exhilaration that we survived a harrowing experience. That’s how I feel whenever I read horror novels. If we writers can imagine our work like a roller coaster ride, I think our writing will enthrall the readers.