A Point of Pride: Interview with Cody Sisco 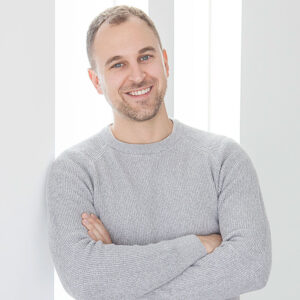 Cody Sisco is an author, editor, publisher, and literary community organizer. His LGBT psychological science fiction series includes two novels thus far, Broken Mirror and Tortured Echoes. He is a freelance editor specializing in genre-bending fiction and an editor for Running Wild Press. In 2017, he co-founded Made in L.A. Writers, an indie author co-op dedicated to the support and appreciation of independent authors. His startup BookSwell is a literary events and media production company dedicated to lifting up marginalized voices and connecting readers and writers in Southern California and beyond. He serves as a Co-Executive on the Board of Governors for the Editorial Freelancers Association and as a board member at APLA Health.

Although I had been writing sporadically for as long as I could remember, I got serious about it when two things happened in rapid succession: a young family member died tragically young and my career began to accelerate in a direction that wasn’t fulfilling. I thought, it’s now or never, and amid many other changes I began working diligently and obsessively on my first novel.

Horror reflects realities that many people would like to ignore. But that was never an option for me. I’m a natural worst-case scenario planner and cruelty, injustice, and sadness seemed inevitable parts of being human. Horror exposes undeniable truths and reveals through allegorical storytelling powerful forces and emotions like fear, grief, guilt, anxiety, and hopelessness that have always affected me deeply. Scary stories and stories about monsters— be they human, alien, or fantastical—grip me right away.

Being part of a marginalized group creates a hyperawareness of how members are represented in the media, including in fiction. To paraphrase an apocryphal quote: First they ignore you, then they scorn you, then they laugh at you, etc. When LGBTQ writers tell stories, there can be pressure to create “good representation” and to avoid portrayals that are complicated or nuanced especially if they touch on stereotypes. Writing horror is doubly tricky because we have to navigate creating characters and plots based on real fears and injustices, which can blur into inflicting pain on readers and calling up their trauma.

In my writing, I aim to include shades of dark and light, to explore the complications, inconsistencies, and dilemmas that shape every character, and to reach a queer audience with stories that expand the boundaries of queer pop culture.

It’s taught me that there is an audience for audacious, wild, and wacky stories and I don’t have to dial back my imagination. I can let it ooze into creepy corners and linger on disturbing images and scenarios. What better way to create or seek thrills than in the pages of a book?

Literature and publishing more generally are reckoning with a legacy of gatekeeping, discrimination, and marginalization. We have a long way to go and it’s going to take sustained effort and dialogue among readers, authors, editors, and publishers to continue to open up.

I mentioned representation before, and I believe it’s a winding journey that changes quickly. Small wins build into larger movements of cultural change. My hope is that we cultivate a cultural norm to tell and listen to stories about people, situations, places, and problems that are far beyond what we already know. Horror is a fitting gateway to those stories.

I’ve been a Clive Barker fan for a long, long time. His books of the Art, short stories, and other novels were the first places I read about LGBTQ characters that felt real and multidimensional.  Other than that, I have a lot of mixed feelings about some characters, including the Baron Harkonnen in Dune and LGBTQ representation in Stephen King novels—it’s there, but it’s usually accompanied by slurs and violence that feels a bit too gleeful. In other formats, Willow from Buffy the Vampire Slayer has a beautifully epic arc.

I love Seanan McGuire’s books both when she’s writing as herself and as Mira Grant. Not to be missed.

General advice can so easily miss the mark, but I’ll hazard this: look deep within at whatever darkness you carry and let your imagination run wild with it.

Find your crew. Writing can be lonely, and publishing can be dizzying. It’s much more fun and gratifying to go on the journey with companions.