A Point of Pride: Interview with Caitlin Marceau 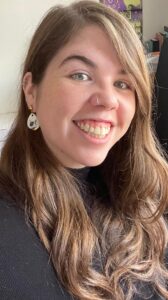 Caitlin Marceau is a queer author and, and an active member of the HWA, whose work primarily showcases queer women and her debut collection, Palimpsest, was released this past March by Ghost Orchid Press. Her work has appeared in collections such as Beyond The Veil: Supernatural Tales Of Queer Love, Blood & Bone, and Dark Hearts. Her debut novella, This Is Where We Talk Things Out, is scheduled for release this summer by Dark Lit Press and they’re also set to publish her second collection, Femina (which focuses on the horror of womanhood), in early 2023. A full list of her published and forthcoming works can be found at CaitlinMarceau.ca.

When I was younger, I wanted to do everything. I begged my parents to let me try ballet, painting, diving (even though I’ve always been scared of heights), soccer, soap carving, learning Latin, boating… you name it. Even though my parents knew I was going to get bored or decide this new hobby of the week wasn’t going to be for me, they let me try them all. And it was actually this desire to do everything that made me realize I wanted to be an author. I mean, in what other job can you live a thousand lives, you know? So even though I didn’t stick with soccer or Latin, I’m eternally grateful to my parents for allowing me to try them because it’s how I figured out what I was really meant to do.

I always feel weird admitting this, but I used to hate horror. I suffered from sleep paralysis and night terrors as a kid, so I avoided anything and everything that was scary. But, as I got older, I got tired of being afraid all the time and decided to conquer my fears and I ended up consuming as much horror media as I could. I always joke that I overcorrected because now, I’m not just unafraid of horror, I’m an avid fan of it now.

So I was closeted until I was almost twenty. I had attempted to come out when I was in high school and it was such a horrible experience that I didn’t try for almost another ten years. During that time, my writing included a lot of queer characters, but they were almost exclusively men because I was worried that having a queer woman in a story would give away hints about my sexuality. Since coming out and being a lot more open and vocal about being bisexual, almost all of my stories feature queer women as their protagonists. I think representation is really important, so I make a point of having queer women in almost everything I write. And, in a way, I like to think I’m making up for some of that lost time when I was too afraid to be unashamedly myself.

Strangely, writing horror has taught me that the world is what we make it. It has the potential to be this horrible place filled with even worse people, or it can be a wonderful place where kindness thrives. When it comes to myself, horror has helped me find my voice and the confidence—hell, the courage—I needed to be my authentic self.

I think (I hope) that horror is going to get even more inclusive, diverse, and equitable. I think we’ve seen a lot more inclusion when it comes to queer authors and characters in the genre, but I’d love to see more authors of colour and intersecting identities in the community. While I strongly encourage readers to pick up books from neurodivergent authors, disabled authors, and more BIPOC authors, I also think the industry needs a massive overhaul. Right now, being an author is a privilege that not everyone can afford, so I think we’ll only see real change when publishers level the playing field and make the industry more equitable for everyone, which unfortunately isn’t something that will happen overnight.

Growing up, I rarely saw queer characters in horror. If there was an LGBTQ2+ character in a horror film, they were either the villain or being exploited for laughs or some kind of shock value on camera. Queer characters were often depicted as monstrous or as “the other,” and it sucked! Now, having LGBTQ2+ characters in horror is pretty commonplace. I think we’re seeing a lot more stories that centre on queer individuals without their narratives being exclusively about their queerness, which is also really refreshing. I guess, going forward, I’d like to see more bi representation that’s less problematic. I still feel like bisexuals get either a bad rap in media or get erased, so I’d love to see more bisexuals that aren’t unfortunate stereotypes.

I mean, the Babadook is an absolute icon, obviously. I also really enjoyed Jennifer Check, played by Megan Fox, in Jennifer’s Body (2009). I loved the teen romance in the recent Fear Street trilogy. Maybe it was just me, but I thought it was so fresh and positive and just a great horror franchise with queer love at its heart. And I’d be lying if I said I wasn’t also a sucker for how the romance in The Haunting Of Bly Manor (2020) started, even if I was horribly disappointed with how it ended.

Mark Nixon of Shadows at the Door is incredible (as is his podcast). I’d also highly recommend April Yates, Hailey Piper, Joe Koch, and Evelyn Freeling.

Write the stories you want to read. It’s easy to get swept up in the idea that you need to write for the market or write what’s trending, but I think that’s total bullsh*t. Write stories that you’re excited about. Write the characters you wish you could have read. And set the trends you want to see in horror. Because if you don’t, who will?

Writing is a pretty solitary activity that can feel isolating at times—even more so when you’re an LGBTQ2+ author—so do yourself a favour and connect with other writers. I promise you, there are so many people in the writing community that will love you for who you are, and who are also facing the same struggles as you. So reach out, make friends, and help build up a positive and inclusive community that everyone deserves to be a part of.