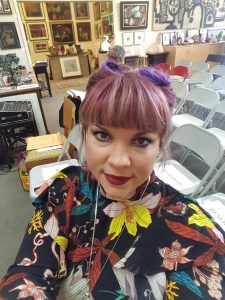 February is Women in Horror Month! The HWA is celebrating by posting interviews with award-winning authors. Following is an interview with Rain Graves who has won the Bram Stoker Award twice for poetry, including for The Gossamer Eye in 2002 and The Four Elements in 2013.

RG: I received two awards; one for THE GOSSAMER EYE (written with David N. Wilson and Mark McLaughlin in 2002), and one for THE FOUR ELEMENTS (written with Linda Addison, Charlee Jacob, and Marge Simon in 2013). BARFODDER: Poetry Written in Dark Bars and Questionable Cafes was a finalist in 2009 as well. Inspirations for TGE for me came with a lot of what I was doing at the time… Goth Clubbing, Zombie Weddings, Gothic DarkMas and vampire balls. Trips to LA, New Orleans, and various local underground punk scenes. I was in love with spoken word more than the written word at the time, so everything in that book was intended to perform well on stage. Critical reaction was more or less, “What the heck is this stuff, and how do I read it?” From a horror perspective, very few of us were doing poetry at that time, and the HWA hadn’t had a poetry award for very long. There was talk maybe two or three years later of discontinuing it, which I rallied hard against. It put horror poetry in front of people who never would have read it before. Many avid readers in the genre relied on the winning lists of Stoker Awards for reading agendas, and they were beginning to enjoy what poets were putting out there. A lot of people argued it was impossible to judge, but it wasn’t the case. People just needed more of it to understand it, compare it, and contrast it.

With TFE, we each took an element in nature and transformed it from the physical to metaphysical, to mythical, to modern. I approached it less from a metaphysical standpoint, and more from what water in dark times meant to people. Ancient mythos were inspiring, mermaids, wine, mollusks and the human body’s 70%. Linda came to me with the idea of the collaboration, and I love and respect the work of the other women in the book, so of course I was happy to do it. Happier still to be recognized with the award for it. We each went to our own depths with that one. Some of the poems wound up in the Year’s Best honorable mentions, among other things. At the time, my loves had reversed. I was no longer in love with spoken word performances, and more in love with the written word. At shows, I didn’t perform as many of these as people would have liked. I was doing a lot with wine writing at the time, specifically commissioned poetry for wine makers, so there are a few influences in my section with regards to metaphoric nature and properties. Noble Rot and such. We were so lucky with Bad Moon Books. At a time when Roy Robbins had always said he would not publish poetry, he jumped on our project with enthusiasm after reading the manuscript. We were so pleased with the book’s limited hardback, too. Ironically, the four of us have never been in one place at the same time to perform any of the pieces in conjunction with TFE together.

BARFODDER was exactly as the title implies. My inspiration came from people watching, art circles, underground DJ holes, and the poetry/art scene in San Francisco, Buenos Aires, and anywhere I traveled during that time. I could pull up a bar stool or café chair and write, soaking in the vibe, then tuning out humanity. I met so many interesting characters and did so many fun things. It was the end and beginning of an era in SF’s poetry scene, too. A lot of poets couldn’t afford to stay and left California. The others scraped by, including myself, doing odd jobs, day jobs, and selling what we could of our work. Publisher’s Weekly gave it a great review, just before they changed their format for reviewing things. The reviewer felt it was oddly put together, but called it “Bukowski meets Lovecraft,” which couldn’t have made me happier. When people ask me what to expect from my work, to this day, I use that phrase. I was surprised, but happy it was nominated for the award, even though I didn’t win.

RG: I’ve never been a member of the HWA, so it’s always funny when people try to argue that they play favorites when giving the awards. They argue that people who campaign for the award – sending mass emails to friends and members offering free copies so that people will read it and recommend it for the Stoker – is a soul killing disease that paints the writer into that picture of favorite or pimp, depending on their involvement with the HWA. That hasn’t been my experience in terms of my work. I have never once campaigned. I have never once asked anyone to read it. I just do the work, and put it out there. My publishers offer free downloads or hard copies to reviewers. I think Roy may have offered a free download to HWA members when TFE made the final ballot. So I am always surprised to see my name on the preliminary ballot, and final ballot. Definitely surprised to ever win.

Winning the award has always been great marketing for the books themselves. Does the award sell books? I don’t know, I’m not a publisher. I do know that it gets my work out there to people who might not ever read me. I was approached by editors after the 2002 win for work, rather than me hunting for market opportunities as much as I usually did. There weren’t many markets for poetry at the time, so I wound up making a lot of short story sales from editors that read TGE, which had a short story from each of us in it.

I was approached for even better opportunities after the 2013 book won. Agents, publishers, and editors all doing different things. I tend to feel that’s because I’ve been in the business making pro sales since 1997, not because I’ve won the award. But the Stoker pays it forward in other ways. Any writer will tell you, the exposure is what counts, and every writer loves to be recognized for their work. Anyone that tells you differently is lying. We are solitary, brooding, whimsical, weird, wonderful creatures that MUST write things down, or die. There are stages of grief after birthing a book. Getting past all that, there is always the question: Will they like it? The dreaded feeling of ohgodohgodohgod what if the reviews are bad? Winning a Bram Stoker Award allows a writer, even if for the brief period of 24 hours, that prying those words out of our deepest, darkest places, leaving holes and patching some up, is somehow worth it. After the awards are given, however, all bets are off. We go back into our caves, swallowing as much coal as we can, hoping to poop out a diamond.

RG: I’ve dealt with this question since I started taking writing seriously. I think it used to be that way, but it isn’t so much anymore. Men face more difficulties writing Romance than women do writing Horror. Are there cliques and vicious circles and other types of wewontpublishyous? Sure. But you’ll never get anywhere if you worry about those things instead of how good your story can and will be. If you can write well, you will succeed, as long as you put yourself out there. That said, I’m glad I’m not one of 10 female horror writers at pro conventions anymore. I hate being relegated to “women only” anthologies. I feel no competition with my female colleagues. Instead, I feel pride for them. I came into this business when certain low-end mass-market publishers were eager to find actual live females that wrote horror, almost as a novelty, for publication. It worked for us, ironically, and not against us. There will always be some under-educated and ego-inflated exception to the rule, who refuses to take me seriously or read my manuscript because I’m a woman. Do I care? Not one bit. I wouldn’t want to be in that kind of publication, anyway.

RG: Finish what you start. Don’t be afraid to put something out there. Once it goes out, don’t be afraid for an editor to rip it to shreds. It’s all part of the process, and it will make you a better writer in the long run, even if that editor was wrong. Practice makes perfect. Keep doing you, and don’t do what everyone else is doing simply because it’s selling. Make friends with and talk to other writers. It’s ok to join writer’s groups that meet in person and critique eachother. As long as you are unafraid to move on from them once you have learned what you needed to learn to put your stuff out there, rather than seeking the approval of your group forever, because it is safe. Rejection sucks. Get over it. Submit to the big guys. You can do it. And most importantly… Don’t ever let anyone tell you poetry does not earn substantial advances, or sell. I am living proof that it does.

RG: I’m working on a Lovecraftian novel that is moving as slow as molasses, called STRANGER. Quite possibly a new metaphysical dark fantasy series, too, that was just inspired by a recent trip to Arizona. Another book of poetry is also halfway complete. A top secret comic book project that is in the hurry-up-and-wait phase. An artist that has the rights to a popular but somewhat obscure 1980’s universe/character as recruited me to breathe some new life into the story. Unfortunately I can’t say more than that at this time. I’ll be working on a team in San Francisco called Kidnapped Studios on that, and one other sci-fi/fantasy project that is still in its conception and story-board phase.