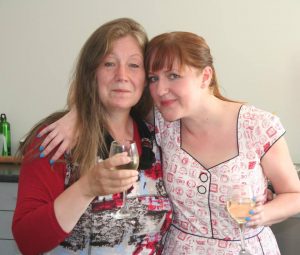 Allyson Bird with her daughter Sarah

February is Women in Horror Month! The HWA is celebrating by posting interviews with award-winning authors. Following is an interview with Allyson Bird, who won the Bram Stoker Award in 2011 for her first novel, Isis Unbound.

AB: Isis Unbound won for first novel. It was inspired by Mary Shelley’s Frankenstein, Prometheus Unbound, and the works of Rider Haggard and R.E.Howard. Set in an alternate history timeline, an ‘1890’s’ steampunk version of Manceastre, Britanniae, ruled by a new governor general…the descendant of Anthony and Cleopatra. Only a god can kill a god. Nepythys has killed her sister, Isis, and therefore the dead cannot pass over to the underworld. The Chief Embalmer, Ptolemy Child’s two daughters, Ella and Loli, aged eighteen and ten respectively, are being instructed in the secrets of the mummification process, when the dead begin to wake and walk. They eventually lead the sisters to the greatest mystery of all: Isis, herself…

AB: Winning the award was important to me. The novel was read. It was wonderful to hear that I’d actually won it. At the moment it is carefully wrapped up as we keep getting earthquakes in New Zealand.

AB: Yes. I’ve had much support from some great male writers but there are always a few who will try to bring you down if you do something they don’t agree with. That time I outed the fascist/racist David A. Riley caused me some problems. A few writers tried to cause trouble for me but it backfired on them. Speaking up is important as America faces the terrible years ahead with Trump dedicated to dividing the country. If you see hatred and racism, inequality regarding LGBTQ and women’s rights, discrimination against any minority ….SPEAK OUT…if you don’t who will? My advice to women is do what your conscience tells you to do. Write what you want to write not what you think others might want to read. If you ask yourself how will this affect your career….that is the wrong question to ask. Whether it is fiction or fact write it and those who are meant to be with you will support you.

AB: When I wrote my first collection, Bull Running for Girls, I set almost every story in a country I had visited, and invested in that setting an experience from my life. I also wrote it whilst grieving for my mother and sister. So yes write about yourself. Be honest. A reader will see that. Also. Read as much as you can. Shakespeare. Robert W. Chambers. Angela Carter. John Le Carre…all on my bookshelves. I live in New Zealand now so I’ve just read Katherine Mansfield. I’m on Margaret Atwood’s trilogy at the moment starting with Oryx and Crake.

AB: Pinned to my notice board is the title of my third collection. The Zealandia Oyster Salon. In this will be stories written since I moved to New Zealand. It will start with The Beat Hotel 2012 which was in the anthology, A Season in Carcosa, edited by Joe Pulver. I think this story came as close as possible to what I really want my work to be. Also Les Fleurs Du Mal 2015 for another anthology by Joe Pulver which was in Cassilda’s Song.

Allyson Bird used to be a housing manager for Moss Side and Hulme in Manchester and then lived in Yorkshire. Her collection of short stories, BULL RUNNING FOR GIRLS, won best collection in the British Fantasy Society Awards 2009. Now she farms and writes in New Zealand. ISIS UNBOUND won the Bram Stoker Award from HWA for superior achievement in a first novel in 2011.