March contains Extraterrestrial Abductions Day, a good day to stay in and discover some new authors. 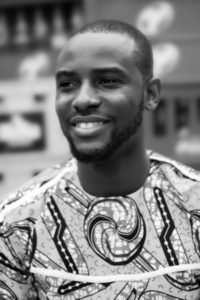 Suyi Davies Okungbowa is a Nigerian author of fantasy, science fiction, and horror inspired by his West-African origins. He has a great track record of short stories in various markets including Tor.com, Lightspeed, Nightmare, Strange Horizons, Fireside, Podcastle, The Dark, and anthologies like Year’s Best Science Fiction and Fantasy, A World of Horror (Dark Moon Books, 2018), and People of Colour Destroy Science Fiction (Lightspeed, 2017). 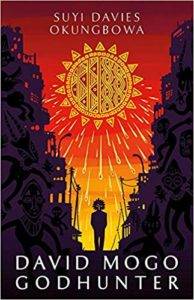 Okungbowa’s debut novel, David Mogo: Godhunter, is a recent dark urban fantasy set in Lagos, Nigeria, his primary hometown (he’s otherwise in Tucson, Arizona) and is working toward his MFA in Creative Writing. The British Science Fiction Assn. long lists are out, and he has been nominated in TWO categories (Best Novel and Best Nonfiction).

In addition, Suyi has a new three-book deal, The Nameless Republic, with Orbit, starting 2021.

The press release states: “In the thriving city of Bassa, Danso is a clever but disillusioned scholar who longs for a life beyond the rigid family and political obligations expected of the city’s elite. A way out presents itself when Lilong, a skin-changing warrior, shows up wounded in his barn. She comes from the Nameless Islands—which, according to Bassa lore, don’t exist—and neither should the mythical magic of ibor she wields. Now swept into a conspiracy far beyond his understanding, Danso will have to set out on a journey that reveals histories violently suppressed and magic only found in lore.”

Recommended work: David Mogo: Godhunter. We meet the eponymous anti-hero David Mogo; “This is going to be a bad job. I know it from the angular smile of the wizard-ruler seated before me. I know it because I should sense the icy heat of his godessence on my collarbone, but feel absolutely nothing. I know it because right outside this handcrafted palace, the rest of Lagos mainland is a dank, brooding, perilous hog pen; yet this foyer smells like orange air freshener, and you can only ignore the stink of your own shit for so long.”

You can find Suyi online: Twitter @IAmSuyiDavies and is @suyidavies everywhere else.

His Web site is http://suyidavies.com/. 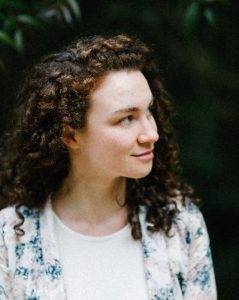 Darcy Coates is the USA Today bestselling author of Hunted, The Haunting of Ashburn House, Craven Manor, and more than a dozen horror and suspense titles. She lives on the Central Coast of Australia with her family, cats, and a garden full of herbs and vegetables. Darcy loves forests, especially old-growth forests where the trees dwarf anyone who steps between them. Wherever she lives, she tries to have a mountain range close by. 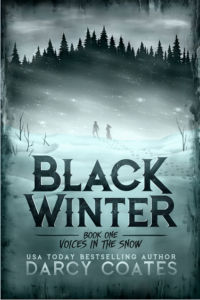 Recommended work: Black Winter: Book One. “Clare remembers the cold. She remembers abandoned cars and children’s toys littered across the road. She remembers dark shapes in the snow and a terror she can’t explain. And then … nothing.

When she wakes, aching and afraid in a stranger’s gothic home, he tells her she was in an accident. He claims he saved her. Clare wants to leave, but a vicious snowstorm has blanketed the world in white, trapping them together, and there’s nothing she can do but wait.

At least the stranger seems kind … but Clare doesn’t know if she can trust him. He promised they were alone here, but she sees and hears things that convince her something else is creeping about the surrounding woods, watching. Waiting. Between the claustrophobic storm and the inescapable sense of being hunted, Clare is on edge … and increasingly certain of one thing:

Her car crash wasn’t an accident. Something is waiting for her to step outside the fragile safety of the house … something monstrous, something unfeeling.

Find out more about the author at http://www.darcycoates.com.

Nino Cipri is a queer and trans/nonbinary writer, editor, and educator. They are a graduate of the 2014 Clarion Writers’ Workshop, and earned their MFA in fiction from the University of Kansas in 2019. A multi-disciplinary artist, Nino has also written plays, screenplays, and radio features; performed as a dancer, actor, and puppeteer; and worked as a stagehand, bookseller, bike mechanic, and labor organizer. One time, an angry person on the Internet called Nino a verbal terrorist, which was pretty funny.

Nino’s 2019 story collection, Homesick, won the Dzanc Short Fiction Collection Prize, and their novella, Finna (about queer heartbreak, working retail, and wormholes) will be published by Tor.com in 2020. They also write a bimonthly newsletter, Cool Story, Bro, about multi-media narratives and how cool they are. They are represented by DongWon Song of the Howard Morhaim Agency.

Recommended work: from, “She Hides Sometimes,” in which Anjana’s childhood home is disappearing around her. This story appears in Cipri’s collection, Homesick:

“Anjana wrapped her arms around her knees, shut her eyes, and tried to listen to the house the way she used to, when her sister was already grown and her parents existed on the other side of a great impassable wall: in their late forties when she was born, from another generation, from another country.

The house didn’t sound different. It sounded the same as when she was a child, a little girl who had liked to hide sometimes. She’d burrowed into a quiet, tight-fitting spot, held her breath, and tried to imagine what the world would be like if she disappeared.

When Anjana opened her eyes, she went cold with fear. The bookshelves were gone. The closet door hung ajar, empty. The walls had crept closer to her. It took several moments before she could force her limbs to move, to gather up her pillow and duvet and walk—calmly, slowly, as if she were trying to escape the notice of a predator—outside to her car, still parked in the driveway. She slept fitfully in the backseat, her breath fogging the windows.” 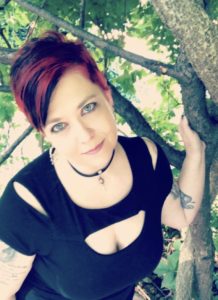 Eve Knight is a horror writer from Pittsburgh, PA now living in the wilds of Michigan’s Upper Peninsula with her family, a place easily inclined to inspire scary dreams and nightmares. Growing up with her beloved grandmother, Eve was raised on one of my favorites, Grimm’s Brothers Fairytales. This put the love of all things scary in the forefront of her mind, which eventually led to horror favorites like Stephen King’s Pet Sematary.

I found Eve’s work in the anthology The Monstrous Feminine published by Scary Dairy Press. Her short story, “Remember Me,” was haunting enough to capture my attention and make me look for other works of hers. She also has a short in The Toilet Zone (Hellbound Books), along with an upcoming novella to be released later this year entitled Dead Eyes, which will be part of the Rewind or Die series from Unnerving.

However, her debut novel, The Fourth Whore (Raw Dog Screaming Press) promises to be a roller coaster ride of scariness that takes on one of the oldest tropes of man: an intelligent and willful woman named Lilith. A graduate of Seton Hill’s WPF program, Eve started the novel while still within the program and it has evolved into an evocative story that will have you rethink everything you thought you knew about that old wives’ tale. This story is special to Eve, as the story resonates through personal experience and the political climate of the day, which often seems to target women specifically in a negative way.

So, this March, after Women in Horror Month has passed, give EV Knight’s work a try. You won’t regret it.

Recommended work: Premise of The Fourth Whore. Kenzi Brooks watched The Scribble Man collect her brother’s soul after a hit and run when she was seven. He gave her a present that day—a lucky rabbit’s foot. Sixteen years later, she no longer believes in The Scribble Man; she believes in survival and does what she has to in the slums of Detroit. When thugs kill her mother and beat Kenzi to near death, she accidentally releases Lilith from her prison within the time-worn keychain.

And Hell hath no fury …

Lilith is out for revenge. Revenge against God, Sariel (Angel of Death and Kenzi’s Scribble Man), and all of mankind for relegating her to nothing more than a demoness for refusing to submit to her husband. She’s put together an apocalyptic plan to destroy everyone who has forsaken her. Forget the Four Horsemen, Lilith is assembling the Four Whores.

Will Kenzi rise against her to save the world and The Scribble Man or will she become The Fourth Whore?