As far as I know, no student ever saw inside the room with the yellow, rippled glass window.

The only one on the second floor of St. James School not part of a classroom row, the window glared down like an angry eye at the parking lot where we played every day during recess. I never found the room it belonged to before I left there for another school, because where it fell between classrooms, no door or other feature existed to explain it. That alone inspired plenty of speculation amongst my third grade class, but the faded red stains that covered almost a third of it and the surrounding bricks made it a genuine object of fascination and horror. The rust-colored streaks spread out from the frame as if something had bled there, and a dripping smear covered three-quarters of the window’s left side.

Behind that glass, in that elusive room. And if you came to school at midnight and spoke her name three times while looking at the window, she’d appear.

What happened then? No one knew. A few brave kids tried it out during recess on a dare or as a tease to send the second graders screaming back to their classrooms. Bloody Mary never appeared, of course, not in broad daylight with so many people watching, but when the sun hit the window the right way, the stain on the glass looked like a long-haired woman staring out with her palm pressed to the glass. In eight-year-old imaginations, that stain marked where she had bled through the window.

We traded theories about her identity. A student locked up and left to die long ago by an evil teacher. A nun who died in the school and lingered to haunt unruly students. Or worse, a student who killed herself over bad grades, cutting her wrists and bleeding so much, the school forever sealed off the room. Some kids said Bloody Mary was no one—only the dead girl in the window, no big deal, as if every school had one, like a mascot or a flagpole.

In a sense, that’s true. Every town seems to have its own legends about death figures summoned by speaking their name into a darkened window, or a mirror by candlelight, or while standing on some lonely stretch of road where a teenager died in a crash, or over a grave. We traded those stories around, even in the third grade, bloody myths of horrible death and tragedy. They became our way of processing a burgeoning awareness of danger and darkness in the world.

The stories were our Grimm’s Fairy Tales, our warnings to each other that not all adults could be trusted, that the world isn’t a safe place, that some doors should remain unopened, and that even kids might be capable of tragic violence such as suicide. Our teachers and parents humored us and did little to discourage the stories. They told us Bloody Mary didn’t exist and left it at that. Maybe they knew, consciously or not, it was part of growing and adapting and preparing for the real world, but I suspect these days talk of suicide and razor blades and dead children at school brings a very different reaction. The stories would be taken away and with them our comfortable grip on frightening things.

That’s why we need horror stories and Halloween, to provide safe places to explore the darkness and understand the dangers in the world, to prepare ourselves should we ever dare to look in the window at midnight, whisper “Bloody Mary” three times—and something should appear.

For the next thirty-one days, members of the Horror Writers Association will present to you their memories of Halloween, their favorite traditions, their thoughts on horror writing, and peeks into the terrifying worlds of shadow. Our contributors this year include Glenn Benest, L. Andrew Cooper, JG Faherty, Tonya Hurley, James Kendley, Nancy Kilpatrick, Kate Jonez, Lisa Morton, Annie Neugebauer, Mark Onspaugh, Loren Rhoads, David B. Riley, David Sakmyster, Matthew Warner, and many others. So bookmark this page, join our Facebook event page, and don’t miss a day of the fun and chills!

You can learn more about joining here: http://www.horror.org/joinhwa.htm. Or send questions to: membership@horror.org.

A special thanks to all of our contributors for sharing their Halloween anecdotes and traditions, suggestions for celebrating the season, and thoughts and advice about writing horror. It’s a great pleasure to coordinate and edit Halloween Haunts and to have a chance to work with so many of my fellow HWA members. Thanks, as well, to Lisa Morton and Angel Leigh McCoy, whose continued support make this event possible. Thanks to Greg Chapman for drawing and designing our wonderful Halloween Haunts banner and to Doug Murano for his help in promoting Halloween Haunts on HWA social media. A huge thanks and special welcome to Jason Sileo, who bravely jumped in to help put this year’s Halloween Haunts together. Truly, if not for Jason’s assistance this might have been a year without a Halloween Haunts!

And now, the treats…! 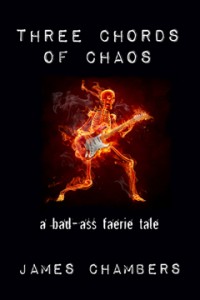 ES: In addition to their posts and excerpts, many of our contributors are offering e-book and print copies of their books for lucky readers who enter in each giveaway. If an author is offering a giveaway with their post, it will be noted and the format specified (print or e-book). Enter for the prize by posting in the comments section. Winners will be chosen at random and notified by e-mail. You may enter once for each giveaway, and all entrants may be considered for other giveaways if they don’t win on the day they post. You may also enter by e-mailing membership@horror.org and putting HH CONTEST ENTRY in the header.

TODAY’S GIVEAWAY: James Chambers is giving away one set of The Dead Bear Witness and Tears of Blood in paperback. 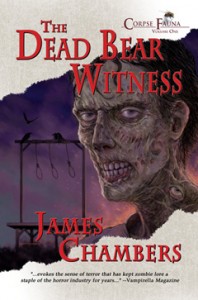 JAMES CHAMBERS’ tales of horror, crime, fantasy, and science fiction have been published in numerous anthologies, collections, and magazines. Publisher’s Weekly described The Engines of Sacrifice, his collection of four Lovecraftian-inspired novellas, as “chillingly evocative.” His other works include the novella Three Chords of Chaos, The Dead Bear Witness and Tears of Blood (the first two novellas in the Corpse Fauna series), and the story collections Resurrection House and The Midnight Hour: Saint Lawn Hill and Other Tales. His stories have appeared in the award-winning Bad-Ass Faeries and Defending the Future anthology series as well as Allen K’s Inhuman, The Avenger: Roaring Heart of the Crucible, Bare Bone, Chiral Mad 2, Clockwork Chaos, Deep Cuts, Fantastic Futures 13, The Green Hornet Chronicles, In an Iron Cage, Reel Dark, Shadows Over Main Street, The Spider: Extreme Prejudice, To Hell in a Fast Car, Truth or Dare?, Qualia Nous, Walrus Tales, With Great Power, and many others. He is online at www.jameschambersonline.com.

One comment on “Halloween Haunts: Bloody Mary by James Chambers”