Halloween Haunts: A Peak Through the Leper Window–Finding Unholy Inspiration in Holy Places by Frazer Lee 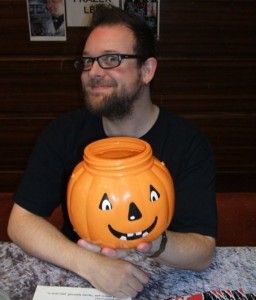 When the Season of Mists comes, and Halloween with it, I enjoy nothing better than sitting beside the fire with a book – often in search of inspiration for my next story.

A couple of Halloweens ago I was leafing through an old history book, Ecclesiastical Curiosities (ed. William Andrews, 1899) – if you must know – and chanced upon the term ‘leper window’.

My imagination began to run wild with the revelation that these ‘low windows’ (also known as hagioscopes or squints) were incorporated into church buildings so that lepers could watch services without upsetting other members of the congregation.

Imagination well and truly sparked, I began researching leper windows on the worldwide web and found that they are much more common than I’d imagined. Two of the most well-known are undoubtedly the window at St. Martin’s Church (in Liskeard, Cornwall), which is one of the prettiest examples, and the ‘squint’ at St. Botolph’s in Northamptonshire. Anyone exploring South Wales is encouraged to take the coastal walk to Marcross Holy Trinity Church, where a 12th Century example awaits you. My home county of Buckinghamshire also plays host to leper windows – notably the example at All Saints Church, Lathbury, a building which also features some disturbing two-headed dragon sculptures (or are they demonic creatures from some Lovecraftian dimension?)

Some accounts give a less dramatic interpretation of the leper window’s historical use – and it is easy to see the logic in using them to communicate with bell ringers during services. Far more exciting, though, is a tale about the leper window in St. Helen’s Church at Bishopgate in London. The church’s unusual design made it both a site of worship (dating back to the 13th Century) and a Benedictine convent. It seems that the leper window gave sisters on the convent side of the building the opportunity to observe parish mass through the aperture. But that’s not all they got up to – certain nuns were banned from using the windows anymore due to their reputation for becoming prone to ‘kissing secular persons’!

To what other sinful use could these innocent looking portals be put, I wondered? Needless to say, a few ideas began to take diabolical shape in my notebook…

But what really inspired me when researching these windows was the tragedy behind them – and I mean that quite literally. I tried to put myself in the shoes of those poor sufferers of such a terrible disease and was overwhelmed by the idea of the sadness they must have felt. It must have been bittersweet indeed to see a community beyond their tiny window, and to hear the voices of the congregation joined as one, but to be cut off from them – cursed to remain in the shadows. I then imagined the hands that built those windows, all those centuries ago, and asked myself ‘what if’. What if the hands that built the leper windows became victims to the ravages of leprosy?

And so my new horror story was born – all thanks to finding unholy inspiration in the holiest of places.

TODAY’S GIVEAWAY: Frazer is offering one e-book copy of The Leper Window. Enter for the prize by posting in the comments section. Winners will be chosen at random and notified by e-mail. You may enter once for each giveaway, and all entrants may be considered for other giveaways if they don’t win on the day they post. You may also enter by e-mailing membership@horror.org and putting HH CONTEST ENTRY in the header.

FRAZER LEE is a novelist, screenwriter and film director. His debut novel The Lamplighters was a Bram Stoker Award® Finalist for First Novel. His other works include The Jack in the Green, The Lucifer Glass, The Skintaker, and The Leper Window. Frazer’s movie credits include the award-winning short films On Edge, Red Lines, Simone, and the critically acclaimed horror/thriller feature film and movie novelization Panic Button. Frazer lectures in Creative Writing and Screenwriting at Brunel and Birkbeck Universities in London, UK. He resides with his family in Buckinghamshire, England just across the cemetery from the actual Hammer House of Horror.

Excerpt from The Leper Window

Daniel Gates tumbled in the throes of a deep nightmare. All around him was a fathomless void—the infernal howl of wind in his ears the only thing marking his descent. He tried to stop himself from falling but his fingers were as liquid passing through a mirror of vapor. 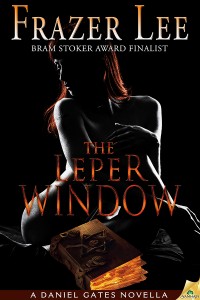 He could see the faint outline of such an object, emerald glass framed by bone, and his fevered mind tried in vain to hold its shape. It was as though a fragment of his sanity was embedded inside each and every molecule of the mirror. As the frayed edges of his sanity collapsed under the force of his psychic descent, so too did his hold on the mirror. He saw the object warp and unravel. The bones that had been wrought into a frame came apart with sickening sounds, cracking and twisting to release a dust of decayed marrow. The dust choked him, each granule diamond sharp and tasting of corruption. The glass of the impossible mirror twisted and bent too, splitting a thousand times over with a noise so deafening that Daniel felt he was at the epicenter of an atomic blast. Shards of green fury washed over him and through him, deconstructing his body and grinding it to dust, which merged with the fragments of glass and detritus of bone.

Daniel realized then, with numbing horror, that there was no epicenter. His entire being was caught up in the maelstrom around him, spiraling into formless void, an abyss without end. A fragmented sense of reason tried to coalesce within his disparate self. To make sense of his undoing, he wanted to brace for some kind of impact, but he knew no such closure. Instead, his exploded form began to separate from the bone dust and broken glass as they whirled and fused together again. He was tumbling and spinning with the mirror in perfect synchronicity, the continuum drawing both ever deeper into the black.

He tried to see, to look outward from his death-state and find his reflection in the emerald glass. As his mind probed the surface of the mirror, he heard a sound—faint at first but growing stronger. It sounded like sharp talons, scraping across the surface beneath the glass.

As though something monstrous was trying to pass through.

When the mirror cracked, Daniel felt an insidious, cold draft emanating from the fissure. The glass shattered, unleashing all of the sound and the fury that had been hiding behind it, biding its time.

The Leper Window is available from:

2 comments on “Halloween Haunts: A Peak Through the Leper Window–Finding Unholy Inspiration in Holy Places by Frazer Lee”