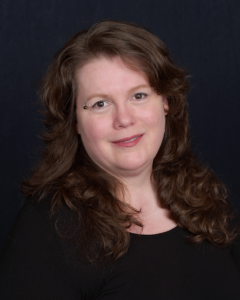 When did you join the HWA?
Somewhere in the mid-90s, a time that’s a blur for me. I was a young writer, just starting out in my career, having published several professional table-top roleplaying supplements. I remember being aflutter that I qualified for Active status. Then, life happened, and I let my membership lapse. I rejoined in 1999 as I was making major changes in my life. I consider that to be my official HWA anniversary because that was the year I started publishing my short Horror fiction.

What is your role in the HWA, and for how long have you been in that role?
Some people call me the “webmistress” though I tend to use “webmaster.” I’m not a fan of feminized titles. I find them condescending and choose to take ownership of the “male” version of a title rather than adding my gender to the mix or watering them down with “person” attached. A woman, for example, can be a fireman. A really great fireman. Calling her a “firewoman” or “fireperson” is ridiculous and demeaning for both her and the person saying it. After all, we don’t say “huwoman,” do we? Just the kind of thing I think about.

I started working on the web team in 2009, under the direction of the previous webmaster, Mark Worthen, a wonderful team leader who taught me a lot about web development. When Mark passed away unexpectedly in 2011, I was the obvious choice as his successor. I’ve been in the role ever since and have had the honor of serving under four HWA presidents.

I handle all the technical aspects of our web presence at Horror.org. I build and maintain the forms and databases for recommendations and submissions for anthologies, juries, scholarships, and more. I also handle the creation, security, and dissemination of our ballots for the Bram Stoker Awards, elections, and recommendation collection.

If you’re having trouble with the website or with your submissions, I’m your best first stop for getting it solved. (webmaster@horror.org) If I can’t help you, I usually know who can.

Who were/are your biggest influences?
Within the HWA, Mark Worthen had a huge influence on me. He taught me the power of service and how it can change your life. Rocky Wood taught me to think bigger and to never stop at “good enough.” Lisa Morton has taught me the joy of teamwork and the strength in tactful honesty. All of them led by example.

Plus I owe gratitude to every single HWA member I have assisted. Through you all, I’ve learned patience, empathy, and how to communicate more clearly. Seriously, I’ve become a better person. The Horror community is unlike any other I’ve ever encountered. It’s my second home.

Was there ever a time you felt being a woman affected your career (for better or for worse)?
The games industry is notoriously gender-biased (not to mention race-biased). I could tell you stories about the better and the worse; though “the worse” stories stick out more than the better. One time, when I was a young writer, I was hired as the first woman on a historically all-male team. My supervisor avoided me for months, then when we finally met, he criticized my writing with such blatant cruelty that he brought tears to my eyes. I sat there fighting them, doing my best to be professional. After that, he refused to be in a one-on-one meeting with me without an HR rep in the room. It was excessive and traumatizing. Every single meeting, I was sure I was going to get fired, and when that didn’t happen, I was confused, so I just worked harder to prove myself. I’ve spent many years trying to figure out why he did that, and the only reason I can come up with is that his male employees allowed him to verbally abuse them with harsh criticism, whereas my reaction was to cry. He didn’t have the experience to know how to deal with it, and neither did I. I hope he learned. I know I did.

Both the RPG and the video game industries have a long history of being White Boys’ Clubs. One of the reasons I created my own indie game company and am now launching an indie author career as well is because I’ve given up on ever breaking through the glass ceiling in a corporate environment. As I’ve gotten older, “ageism” has brought that ceiling even lower until I was watching my chance of success die in my arms.

I chose to do something radical. I became an indie entrepreneur. In this arena, I’m the only one determining whether I succeed or fail. In a corporate environment, it didn’t matter how much experience I had, how much skill, how much talent, or how hard I worked. None of that mattered. Now, I’m bringing those skills, talent, and elbow grease to bear on my own projects. I plan to thrive.

Do you feel women’s role in the horror genre could be improved? If so, how?
Relative to the games industries, the publishing industry (not counting the RWA–cough) seems much more inclusive. In this era of #MeToo and #Gamergate, we have all been challenged to take sides. Despite what some people think, it’s not about Men vs. Women. It’s Exclusivity vs. Inclusivity.

I’m proud to say that the HWA has come down on the side of Inclusivity. I believe it’s fair to say that Lisa Morton led the HWA to take great strides toward bringing the organization into a proper 21st-century stance on diversity.

In the seven years since my savvy co-editors (Chris Marrs and E.S. Magill) and I put together the Deep Cuts: Mayhem, Menace, and Misery anthology, the Horror industry has made great strides. Back then, the Good Ol’ Boys Network was a Thing(TM) that made us women feel left out and even pushed away. We conceived of this anthology with the specific intent of setting an example to others. Our anthology didn’t exclude male authors, but it did honor female authors. We did this by asking each accepted author to recommend their favorite female author. The result was a pool of great stories by men and women along with fantastic recommendations for further reading. Win/win.

Everywhere you look, women writers are earning awards, rocking leadership roles, getting accepted into anthologies, and becoming a huge force in the market right alongside a diverse rainbow of our peers. Yay for us all!

The final hurdle for the Horror industry (and the world), in my humble opinion, is unconscious bias. I believe that the grand majority of people who do or say sexist or racist things do it out of habit, ignorance, or bias they don’t recognize in themselves. They’ve developed a sense of belonging with the bad crowd.

The HWA and the Horror-writing community are the good crowd.

My mother had a saying: “Don’t cut off your nose to spite your face.” In my opinion, any writer who limits themselves with inherent prejudice is doing just that. I’m not perfect, and I had a crapton of garbage put into my head when I was young. It has taken me decades to recognize and nuke most of it, and it’s a continuing effort for me. The way I look at it, if you’re not evolving, you’re dying.

My hope is that we each take an active role in examining our own thought patterns to find those rote expressions that come not from clarity but from habit.

Being part of an organization and group of peers who welcome diversity and provide a safe social environment in which to mingle is huge. I stand by the HWA leadership’s strong stance on diversity and inclusivity. I’ve never felt more supported than I do by my fellow Horror writers. Thank you.

Angel Leigh McCoy is the creative force behind the Wyrdwood novel series and the Dire Multiverse world, including the “Dire Multiverse” audio drama, the Danika Dire video game (in production), and novels to come. You might know her through her ten years of work as a narrative designer for the online fantasy game Guild Wars 2, as a senior writer on the award-winning horror game CONTROL, or through her short fiction. She has published 20+ horror and dark fantasy short stories in publications such as Best Women’s Erotica of the Year 5, Strange Aeons, Necrotic Tissue, and PseudoPod, among others. Her story “Crack O’Doom” earned her an honorable mention in Ellen Datlow’s Best Horror of the Year 4. She wears many other hats as well, including editor and audiobook narrator. You can keep an eye on her whirlwind at AngelMcCoy.com, on GoodReads, Bookbub, Amazon, and @angelmccoy on Twitter and Facebook.