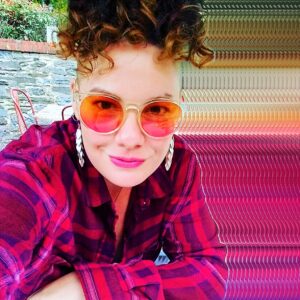 Jessica McHugh is a novelist, poet, and internationally-produced playwright running amok in the fields of horror, sci-fi, young adult, and wherever else her peculiar mind leads. She’s had twenty-five books published in thirteen years, including her bizarro romp, “The Green Kangaroos,” her YA series, “The Darla Decker Diaries,” and her Bram Stoker Award-Nominated blackout poetry collection, “A Complex Accident of Life.” For more info about publications and blackout poetry commissions, please visit McHughniverse.com.

Reading! As a voracious reader of pretty much every genre since I was a little kid, I grew up loving the idea of being a storyteller. The prospect of my words being able to make someone cringe or cry or swoon, maybe even puke (I’m looking at you, “American Psycho”), was extremely appealing to me. It felt like the closest I’ve ever gotten to having superpowers.

Along with the power to ruin someone’s day, I really loved the description that goes along with horror. There are so many colors, sounds, smells, and textures inherent to horror. Though I suppose the same could be true of erotica. 😉 Reading and writing dark and gory fiction feels like musical mayhem to me, and since I was a little kid, I’ve absolutely loved dancing along.

While it depends on the individual story, I do focus on female characters a lot more than I used to. When it comes to blackout poetry, which feels even more intimate to me, I almost exclusively write from a female POV. Because I have less time to affect the reader in that medium, I tend to play the poem close to the chest and tap into whatever hurts most.

Along that line, I’m not always sure what I want to portray until I’m in the thick of it. While I do know a good deal about my characters before I start writing them, I’m not 100% on who they are until I see how they interact with other characters and react to certain situations. Likewise with blackout poetry, since I’m building a story, character, or message using words that the particular manuscript provides, I often don’t know what I’m communicating until I’m a little bit through it and know what words are available to me. But I can say that I mostly want to portray honesty, especially if it’s perceived as ugly or more vulgar just because it’s coming from a (*sips tea*) lady.

With all its varying shapes and shades, horror is around and inside of us all the time. It doesn’t have to make us cower or scream or retreat. It doesn’t have to get its hands dirty. Horror can wear a smile as it consumes you, or as it leaves you alive, suffering, and alone.

Because of that, I’ve chosen to embrace every aspect of horror. When my brother died in January 2021, I dove right into the deep end of my grief and devoured it just as hungrily as it wanted to devour me. I ripped open the wounds of his decades-long addiction, I shone a light on things that family members probably would’ve preferred to remain in the dark, and I tested my artistic boundaries as trauma tested my resolve. And I just got word this morning that “Strange Nests,” the collection I created in that time, made the final ballot of the Bram Stoker Awards. So I’m going to take that as a sign that horror and I are on the same page.

I feel like I’ve seen it turn from something obvious for the most part into something intimate and introspective. That’s not saying horror writers weren’t telling person, introspective stories before, because they were, but I feel like there’s more a focus and demand for that kind of horror as we move away from stories about humans fighting monsters and focus on stories about humans facing the monsters within. And the more mainstream those stories become, especially by writers of color and the LGBTQIA community, the more exciting the genre will be.

I think we’ve come a long way from being femme fatales and scream queens swept up in the narrative to being those who control the narrative. But there are obviously a lot of steps we still need to take. It’s still too difficult for women of color to get published, and even harder for them to get the recognition they deserve. And allowing girls to consume, create, and delight in horror as children is still bizarrely taboo. When I taught after-school creative writing workshops, 90% of the girls ages 8-18 asked permission before writing a horror story—or what they perceived as horror, which was usually the inclusion of blood and death. But I explained to them that their stories of teen girls waking up with amnesia in a mansion where weird adults are training abductees to be assassins could be considered horror stories as well. (so many girls had a version of this story, and I loved the little differences) That revelation, along with me saying, “You don’t need my permission to make art,” allowed them to relax, open up, and actually have fun writing, which was a huge objective of these workshops. It’s crazy to me that these girls’ parents and school teachers convinced them they weren’t allowed to explore the myriad emotions and situations of childhood and adolescence that fit so naturally into the horror genre. The boys, by the way, rarely felt compelled to ask for permission; they jumped eagerly into writing violent war stories and psycho killers. I hope and believe there are other adults out there telling girls it’s perfectly normal (and badass!) to communicate through horror. But I know a whole bunch of radtacular women in horror who have kids, so I have no doubt the future is in good hands.

I’m a big fan of Margaret White in Stephen King’s Carrie, Marharet & Mekare in Anne Rice’s The Vampire Chronicles, Mary Maloney in Roald Dahl’s Lamb to the Slaughter, and Mary Pearl in Dahl’s William and Mary.

Wait. What’s with all the M’s?

Y’ALL WHAT IS HAPPENING. 🤣

Don’t be afraid to be honest, or gross, or controversial…provided it makes sense for the characters and propels the story forward, as there’s a huge difference between writing disturbing, subversive stories and writing to intentionally offend and hurt people. But especially in your first draft, just let it out. Raw, messy, and real.

Go bad, go mad, and be happy-go-lucky as you do it. If people are gonna think you’re a bad woman and a madwoman anyway, you might as well enjoy it.