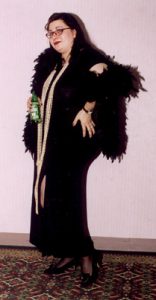 February is Women in Horror Month! The HWA is celebrating by posting interviews with award-winning authors. Following is an interview with Sandra Kasturi who won the Bram Stoker Award in 2000 for her work on the specialty press, Chiaroscuro Magazine.

SK: Brett Savory and I and the Chiaroscuro Magazine (chizine.com) team won for editing back in… I think it was 2001? It feels like it was a different world back then. . . . We were at World Horror in Seattle, and I had gotten sick on the plane, with what (looking back) I now realize was actual influenza. I was so ill that Brett thought I was dead at one point. I was lying in bed and he couldn’t see me breathing! He shook me and it took me a while to respond. I couldn’t keep food down, I couldn’t even shower. I wasn’t even AT the con, really, because I was puking in our hotel room almost the whole time. I had some kind of Big Gulp or Slurpee cup to cough up phlegm into, because I was so weak, I could barely make it to the bathroom. Disgusting, no? At one point, I actually thought I might die–and I didn’t care. All I could think was, “Well, if I get better, that’s great, because it’ll be over. If I die, that’s fine too, because it’ll be over.” On the night of the Stoker Awards, I thought no way could I go to the banquet. But then Sephera Giron came to the door and yelled at me and told me to buck up and shower and get myself together, and get my ass down there. It’s always best to listen to Seph! So, from my deathbed, I managed to get dressed and throw on some red lipstick. In retrospect of course I’m glad I did, because Brett and I were there to accept the award. We were shocked to be nominated–we were even more surprised to actually win! That’s why our speeches were totally incoherent. The photo attached is from that night. I don’t look too awful for someone who was near death? Red lipstick solves everything.

I think that’s the first time I realized that maybe we’d done something really cool with ChiZine.com. Of course, ChiZine Publications wasn’t even a twinkle in our collective eye at that time. But the support of the horror community–the writers and editors, other publishers, readers . . . it was really something. I think I felt like I’d found my people! I’ve always loved all kinds of genre fiction–science fiction, fantasy, horror, magic realism, surrealism, folktales, fairy tales–it’s all been fair game for my reading tastes. But I think horror’s always been my special home. It’s all that early fairy tale reading, with all their gruesome endings, I suspect. And being taken to Hitchcock movies at a FAR too young age, because my dad had no idea what was appropriate for children!

Looking back, ChiZine.com was the first building block of what CZP has become today. We had no idea of course! We were just beside ourselves with delight that anyone voted for us, and that we got to take those little haunted houses home, which still sit in pride of place.

SK: As I said above–totally surprised. And unprepared! I think winning gave us confidence. That the thing we were doing, really, simply because we loved it and we wanted to publish and share the stories and poems we loved, was actually something that other people loved too. C.S. Lewis said something to the effect that he wrote the books he himself wanted to read. I feel like we published the stuff we wanted to read, and it was just sheer luck that other people wanted to read them too. I remember when Brian A. Hopkins won a Stoker for his story, “Five Days in April” that appeared in ChiZine.com–that almost knocked us flat too! We were so thrilled.

And of course the big payoff is that that early success led to Brett saying to me in 2008–“What do you think about doing ChiZine as print books?” And I said, “Fuck it. Let’s do it.” Which is, I’m sure, how all great business decisions get made. I love it when people ask how we did our business plan.

SK: Women everywhere face more difficulties than their male peers in just about every arena–unless it’s something that is considered “women’s work.” Sadly, those biases continue to exist. Although I did see a funny sketch on Saturday Night Live the other night, where a woman was interviewing actresses who were talking about the difficulties of being a woman in a male-dominated field like film. Kate McKinnon was playing an ancient actress who calmly (and hilariously) talked about “tickling FDR’s pickle” when she was invited to the White House. Jennifer Aniston talked about being a director, and Kate McKinnon said, “Did your husband sneak in and stand behind a plant and tell you what to do?” And the other actresses talked about current difficulties . . . oh my GOD, I am making this sound so dull. But it was pretty funny. And the point being, I suppose, that while things still suck in many ways, some things have gotten better. We’ve come a long way, baby. (Did I just quote a Virginia Slims ad?) Anyway, it’s good to remember that, when you’re frustrated because yet another table of contents in an anthology is 95% men. I say that, but I don’t want to be coddled and have things handed to me either. Because then it’s meaningless. I look forward to a time when if the ToC is 95% men, no one bats an eye because things are so equal that only the best stories were chosen–and the fact that it was mostly men that one time is no longer statistically meaningful–it’s just random chance. Will that happen in my lifetime? No. So we keep fighting the good fight.

I will say, though, that I’m not a fan of some of this new wave of feminism, which I sometimes find frightening. And sometimes absurd. There seems to be a kind of current climate which suggests that women can do no wrong simply because they are women, and that, of course, is ridiculous. You’re not sacred because you have a vagina. You’re not a good person because you have boobs. Men aren’t wrong simply because they are men. Assholedom is an equal opportunity employer.

SK: Keep writing. Keep trying to be better. Read A LOT. Read everything. Not just horror. Even read things you’re not necessarily a fan of. That’s how you learn. Learning what not to do is just as important as learning what TO do. That goes for everyone trying to break into horror, not just women. Do the fucking work, and don’t expect a handout. And stop whining. If you’re a good writer, publication and the respect of your peers will come. Don’t do it for the awards. Do it because you can’t bear not to.

SK: ChiZine Publications continues onward, publishing horror and dark SF and F. We do graphic novels (ChiDunnit), young adult (ChiTeen), and mysteries (ChiDunnit) now too. And we launched our poetry imprint, KQP last year. It’s a revival of my old Kelp Queen Press micropress, as a CZP imprint. It’s fun because it allows me to do poetry and strange little projects that maybe don’t quite fit into ChiZine-proper.

On the writing front, I’m trying to finish my next poetry collection, Snake Handling for Beginners. And I’m 75% of the way through a short story collection, Mrs. Kong & Other Monsters, which I’m shopping around. I also got a grant from the Canada Council for the Arts for my Mrs. Kong book. Lit-cred! Finally! Heh. Hope to have the book done in the next few months. Trying to write more short fiction in general. I have a story called “The Beautiful Gears of Dying” coming out this year in The Sum of Us: Tales of the Bonded and Bound, from Laksa Media. Trying to finish a novel–I have three kind of on the go, which I know isn’t really the way to do it, but I guess I have a long history of spreading myself thin!