Halloween is the hardest working time for horror writers, but it’s also the most exciting. We have some good reading for you this month! Hope you all enjoy the HWA’s favorite holiday.

Ross Showalter (he/him) is a Deaf queer writer based in the Pacific Northwest. His short stories, personal essays, and critical pieces have been published in The New York Times, Electric Literature, The Rumpus, Catapult, Literary Hub, Strange Horizons, CRAFT, Black Warrior Review, and elsewhere. His work has been a finalist for the Best of the Net anthology, included on Entropy Magazine’s Best of the Year lists, and supported by the Anderson Center and Deaf Spotlight. He earned his BFA in creative writing from Portland State University, and he currently teaches creative writing courses in UCLA Extension Writers’ Program.

Ross’s work explores the dark intersection between queerness and Deaf rage. I find the horror in his stories to be subtle yet thrilling. His fiction is infused with lust and anger and alienation, the dread encroaching slowly in the background until it suddenly overwhelms you.

“The street outside is deserted, streetlights cutting through night. I still hear car engines, a static, a presence. My hearing aids gleam in the silvery bend of light. I put them on, and I don’t hear anything; the apartment is silent, no vibrations or laughter. It feels hollow, like the way I have felt for hours, days, more.

I think I see flickers of movement, a quick pass of grey through a swirl of dust. Floorboard creaks are the only thing my hearing aids pick up.

Please, I say to the shadows, to the movements. I feel as if I am about to fall off a cliff, and I don’t know what’s below. I will be swallowed. Please don’t do this to me, I say.

The bathroom door swings open, bumps against the wall—a familiar shadow stretches in the rectangle of light. The haunting is inevitable. The haunting is here. I take out my hearing aids. The clock declares this moment as 12:06 a.m. I close my eyes. I wait …”

*Note: Ross has requested I feature an excerpt from his chilling story “Tinnitus” to honor one of the founding editors of No Contact Magazine, Gauraa Shekhar, who died in September. Ross appreciates this opportunity to shine a light on her fine editorial work, as well as the magazine she founded with a first-rate group of colleagues.

Find out more about Ross at: https://www.rossshowalter.com/ and Twitter: @rosshowalter. 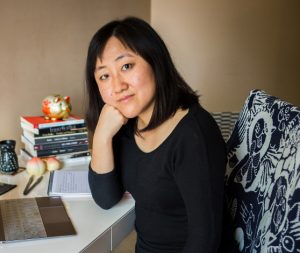 We covered Ling Ma a few years back when her amazing novel, Severance, came out. I was thrilled to see she has a new set of short stories, which I’m sharing here. Her style is anchored in realism, so that the fantastic and terrifying things that happen surprise and delight.

Ling Ma is the author of a new collection, Bliss Montage: Short Stories about which Esquire magazine said: “Weird and wonderful, surreal and subversive, these stories prove that Ma is well on her way to a landmark career.” Her critically acclaimed debut novel Severance (Farrar, Straus & Giroux, 2018), is described as a “meticulous, caustic description of life in big cities and what happens when a terrible pandemic slowly annihilates most of the human population.” Severance won the Kirkus Prize for Fiction, the NYPL Young Lions Fiction Award, and the VCU Cabell First Novelist Award. Named a New York Times Notable Book and an NPR Best Book of 2018, it has been translated into seven languages. Ling’s fiction and nonfiction have appeared in Granta, Playboy, Vice, Chicago Reader, Ninth Letter, Buzzfeed, and more. Her fellowships include a Whiting Award, and an NEA creative writing fellowship.

Ling was born in Sanming, China, and grew up in Utah and Kansas. She received her MFA from Cornell University. Prior to graduate school, she worked as a journalist and editor. She has taught creative writing and English at Cornell University and the University of Chicago. She lives in Chicago. 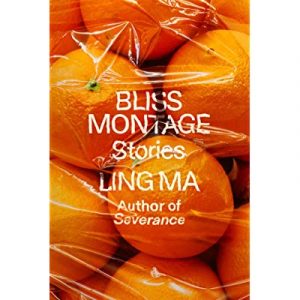 My 100 ex-boyfriends and I hang out every day. We get into the Porsche 911 Turbo S, bunching into it as if it were a clown car, and drive down roads and boulevards, hills and canyons, palm-frond-strewn avenues, and parking garages of shopping malls. Geoff drives. The city sprawls out endlessly. Bougainvillea the color of bruises grows across people’s fences. Sometimes, a bamboo grove. Sometimes, a cemetery. Sometimes, a free clinic devoted to the removal of burst capillaries. The sun hits our faces, our eyes squint in the light, our hair billows in the wind.

On the Husband’s credit card: 101 burgers at Umami Burger, 101 admission tickets to the LACMA, 101 golden milks at Moon Juice. We go shopping. We go to Barneys. We go to Koreatown. We go to Urth Caffe to do some light reading.

Can I get an extra wheatgrass shot? Benoit says.

Does this hoodie make me look fat? Fred says.

It’s almost time for us to go home, Chang says.

And Aaron, he doesn’t say anything. Neither does Adam.

Ling Ma can be found on Tumblr: https://lingma.tumblr.com/

Kathryn E. McGee is one of those writers that whenever I read a story of hers, I think there is a solid horror writer I expect to be in all the anthologies when I go to the bookshelf. Her writing is careful and twisted, her sentences beautifully wrought and her stories are creepy as hell.

Her horror stories have appeared in Kelp Journal, Automata Review, and Gamut Magazine, on the Ladies of the Fright Web site, and in anthologies including Halldark Holidays, Dead Bait 4, Horror Library Vol. 6, Winter Horror Days, and Cemetery Riots. She hosts Skeleton Hour, the HWA’s horror literature webinar series, and is an Active Member of the HWA. Her other work includes co-authoring DTLA37: Downtown Los Angeles in Thirty-seven Stories, a nonfiction coffee table book about Downtown Los Angeles. She has an MFA in creative writing from UC Riverside Palm Desert. 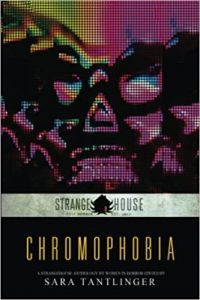 This excerpt is from her very creepy story, “The Unboxing.” You can read the whole story at https://www.ladiesofthefright.com/blog/2020/8/22/the-unboxing-by-kathryn-e-mcgee.

“You look great,” I say to Bret. He wears a salmon-colored polo and faded jeans—the standard-issue outfit that came in the box. His hair is brown; his skin is tanned with crow’s feet near his eyes and laugh lines around his mouth.

“You look radiant,” he says. “That’s a wonderful dress.” He motions toward the white shift I spent hours fawning over before deciding I could pull it off. It’s shorter than what I’d typically wear, but the fabric falls in layers of lace that weigh down the hem. I’ve seen my friends in similar outfits, but I’ve never had occasion to wear white. Not like this.

“Come with me for another drink,” I say.

“I’ll follow you anywhere, Annalise,” he says. “You know that, don’t you?” I know it’s one of his programmed phrases, but I can’t avoid the swooning feeling that rises. He takes my hands, pulls me toward him. I think of other men I’ve kissed—real men. Their lips felt nothing like this. When he embraces me, I know he’s mine. And that I’m his.

C.V. Hunt is a prolific writer of horror and current publisher of Grindhouse Press. She lives in Ohio and has been writing since 2009. Her titles include 17 books, two of which have been translated into German. C.V.’s Halloween Fiend is a fan favorite about a town that requires daily sacrifices to keep the monsters at bay. She also has several short story collections, the most recent being The Next Time You See Me I’ll Probably Be Dead. Her writing is dark, funny, and murderous, making her work perfect for the season. As a writer and publisher, C.V. can see both sides of the coin. She began writing in 2009 and jumped into publishing in 2017, taking over the operations of Grindhouse. When asked about the difference, she advised that doing both has forced her into time management, but also to work just as hard into bringing other authors’ books into the world. 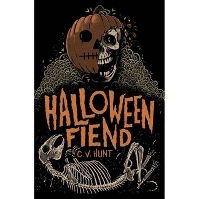 Without turning from the television he said, “I never went out of my way but it made sure I knew it well the one time.” He took another drag before he said solemnly, “I’d leave it alone if I were you. You’ll end up like your mother.”

I wanted to respond with something hateful and as mean as the blow he’d delivered. I was too young to remember how it’d happened. All I knew was it happened on the eve of Christmas … her favorite holiday. I could recall how sad she was the week leading up to the fateful event but I was too small to comprehend what was happening at the time and what the repercussions would be. From what I gathered as I grew older, she’d grown disheartened living in Strang. She’d begged and nagged Dad almost every day to pack up and leave. But he was nothing short of the most stubborn man in the world. Then one year All Hallows’ Eve came and went in the usual fashion and he said something changed in her after the festival. She put up all the Christmas decorations the next day. The house and yard were filled to capacity with everything Christmas. As a kid I thought it was fantastic and I was probably a pestering little shit since the concept of time and adult emotions are lost on a child. She became distant and quiet, she stopped feeding Halloween. Dad had to keep up on the guinea pigs and put one out every evening. During the excitement of dinner and the ceremonial opening of one gift on Christmas Eve he forgot to feed Halloween. The best I could recollect was waking in the dark … and the screams. The sound of your parents screaming in fear for their lives isn’t one you easily forget. Even all these years later.

I stared at the back of his head and said, “Sooner or later, on a long enough timeline, we’ll all end up like Mom.”