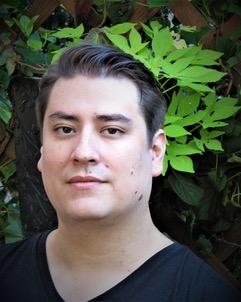 A.P. Thayer is a master of the short form of writing. He is a queer Mexican-American writer out of Los Angeles who dabbles in different genres and is adept at all of them. Speculative fiction, magical realism, and outright horror are all genres attached to his writing and all can apply since he often merges them together. His work can be found in many places, including Dark Recesses Press, the Los Suelos anthology (donating proceeds to the California Rural Legal Assistance Foundation) and Space Fantasy Magazine, among others.

Growing up in Europe whet Thayer’s gothic appetite, and life in general refined his love for horror. His mother regaled him with Latin fairy tales and stories about their culture that echo throughout his work. As a result, Thayer infuses his Latino experiences into his stories, adding Latinx characters or influences while also serving as a staff member for the magazine Constelacion. As he once searched to find representation of himself in literature, he now strives to provide the same in his work. Thayer’s short “Bicicleta” showcases his skill in merging Mexican and American cultures while detailing the acts committed to survive in both worlds. The horror is implied, but the desperation is on full display making the story even more wrenching to the reader.

A.P. also cohosted the podcast The Genre Hustle, which discusses writing groups and crossing genres. He is a firm believer in surrounding yourself with people that challenge and encourage growth. He currently belongs to several writing groups which he credits to helping refine his talent.

His micro fiction story “Necrotizing Fasciitis” is a chilling view of the COVID-19 pandemic and won the Hundred Micro Fiction contest in May 2020. Although chilling in its starkness, the horror is subtle and leans toward speculative fiction. However, Thayer’s story “Hemikrania” showcased below does not straddle the line between genres, but is firmly ensconced in the horrible, disgusting blood-and-guts category we love. It does not disappoint. 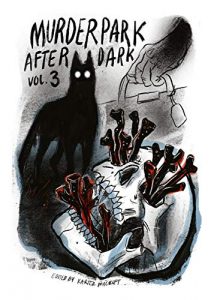 Something beneath the surface wriggles and I cough bile into the basin from the pain. The porcelain of the sink is cold and wet from my palms. My mouth tastes like battery acid.

Needles stab through the front half of my brain and scratch at the inside of my skull, digging grooves into the bone and slicing my brain matter. My knuckles crack under the strain of my grip, but I can’t let go.

It’s growing. Through the haze of tears, my right eye is swelling even bigger. Everything is turning red.

I have to do it. Whatever is in there, I have to let it out, or it’s going to kill me. I have to give it my eye or I’ll lose everything.

I poke my bottom lid and my eye pops.

Flecks of it splatter the mirror, the sink, my face. A red hole stares back at me where my eye used to be.

There’s something in the hole.

A chitinous leg stretches out and stabs the mirror. Spiderweb veins crackle out from the impact and shards fall into the sink, breaking into a hundred twinkling pieces. Another leg squeezes through the small hole, pressing against the other, and digs into the wall for a better grip. I should be screaming, but I can’t.

A third leg slips out, stretching my eye socket as it thrusts forward. I hear my cheekbone crack and my mouth falls open, but still I say nothing, do nothing. It slashes at my reflection once before hooking around the medicine cabinet.

Thayer is currently querying for his newest novel Nagual, a story based in a magical punk Latinx world.

You can find links to his work on his Web site and available for purchase on all venues that sell literary works. His podcast is listed on all platforms. 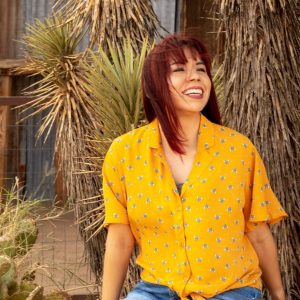 A.E. Santana (she/her) is a Southern California native born and raised in the Imperial Valley, adjacent to the U.S.-Mexico border. She is currently the communications editor for a non-profit organization, the managing editor for Kelp Journal & Books, and was the true horror/paranormal editor for Kelp Journal. She is the moderator for the monthly virtual horror book club, The Thing in the Labyrinth. She is a member of the HWA, the Denver Horror Collective, and is the communications manager for Full Circle Players, a theatre company in Riverside, California. She is also a founding playwright for the East Valley Repertory Theatre in Indio, California. She has participated in several horror panels, including “No Longer the Scream Queen: Women’s Roles in Horror” at LitFest Pasadena, which she organized and moderated.

Her writing ranges from fiction to reviews to critical work, and she is a rising voice in the field of horror.

She received her MFA in Creative Writing and Writing for the Performing Arts from the University of California, Riverside. She graduated from California State University, San Bernardino, with a bachelor’s degree in mass communications and a minor in script writing. Her associate degree in journalism is from Imperial Valley College.

Her perfect day consists of a cup of black tea and her cat, Flynn Kermit. 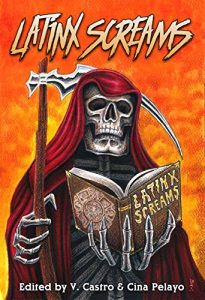 Recommended Reading: from her short, “Teenage Possessions” from Kelp Journal:

I heard Audrey’s voice echo an agreement, but I was distracted with the way the color drained from Bethany’s face, the twitch in her eyelids, and wicked curve of her mouth. She blinked, and her bright, pale blue eyes turned unmistakably green.

Oh my God. I heard the blood rush in my head as my heart pounded. My body hair stood up so violently, it hurt my skin as the goosebumps pulled it taut. I involuntarily clenched my jaw. This was real. Not a fantasy game that poor, abused, or neglected children played to call out for attention. Not a silly story to impress or frighten friends.

I saw the change come over my friend. She was Bethany and she wasn’t Bethany. It was her face, her features, but not her vibrant, proud looks or sad, pale eyes. Those were not her eyes.

I shifted my jaw and it popped painfully. “Sammy?” I asked.

Bethany’s face smirked and her head gave a short nod. I slowly turned to look at Audrey for confirmation. She nodded.

I turned back to Bethany. The rows of books that originally seemed like protective towers were now only flimsy shelves. “Hey, Sammy,” I said. “Can Bethany come back?”

“You don’t want to talk to me?” The voice was far away, but clear and masculine. Strong and heavy, not like Bethany at all.

David K. Bennett, known to his close friends as Dave, is a serious reader of science fiction and fantasy, which began when he was very young. David was introduced to Ray Bradbury while in the third grade, and he read nearly every SF volume in his junior high school library. For many years, he toyed with the idea of writing, along with reading, and in the year of 2000 he got serious about writing.

Over the years, David has accumulated a host of different hobbies, and it may be that his varied interests account for his fast progression into the writing field and deciding to skip the traditional publishing route.

Recommended Reading: The Zdrell Trilogy covers the story of the first person born in over one thousand years on the world of Klastra able to directly wield the awesome power of Zdrell magic. He must quickly learn to use this power to survive and defeat wizards of demon magic whose ultimate purpose is to convert the entire world into a feeding ground for their demon associates. 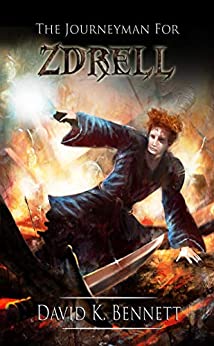 The Apprentice to Zdrell – Book 1

This is the story of Jonny, a young boy plucked out of slavery by the Master Wizard Silurian, to become an apprentice wizard, but one who for the first time in over one thousand years has the ability to master the ancient magic of Zdrell. Jonny has to struggle to learn and master this magic, and he has to do it quickly, because if the demon wizards discover who he is or what he may become, they will stop at nothing to ensure that Zdrell does not return to the world.

The Journeyman For Zdrell – Book 2

Fleeing the scene of his battle with the first demon wizard, hunted by the demon wizards and their accomplices, Jonny, now named Eril, travels the continent of Skryla, traveling as a journeyman weapon smith. He learns from various wizards and continues to gain greater control and power over his Zdrell as he also matures and learns from and about the people he must work with in order to defeat the demon wizards. He fights battles, finds love, and eventually reveals his Zdrell mastery to the world.

The Master of Zdrell – Book 3

After having found and assimilated the cached knowledge of the last Zdrell masters, Jonny, now known as Torin, gathers his forces and allies as the demon forces begin their attack on the continent of Skryla to bring it under the unified domination of Grimor and the demon masters. The battle rages and Torin must do all in his power to defeat the demons and those who support them in order for the world to survive.