It’s time for Summer Reading, and we have some new authors for you to acquaint yourself with. What’s fun this month is there are links so that you can read pieces by Phoenix Alexander and K.M. Szpara directly. Save the links on your phone and read them wherever you’re traveling!

He completed his Ph.D. in the departments of English and African American Studies at Yale University and worked as a curatorial assistant at the Beinecke Rare Book and Manuscript Library for three years, alongside his studies.

Phoenix is a queer, Greek-Cypriot scholar, and writer of speculative fiction, including horror. His work has appeared or is forthcoming in The Magazine of Fantasy and Science Fiction, Beneath Ceaseless Skies, Black Static, The Deadlands, The Dark, and elsewhere. He is a full member of the Science Fiction Writers of America (SFWA), and is serving as a judge for the Arthur C. Clarke Award for 2022. He was also a judge for the 2021 award.

His research interests cover the intersections of librarianship and curatorial practice, speculative fiction, and social justice. His work is informed by the question of how archives can serve as literary “home places” (after Carla Peterson’s definition) for marginalized creators who have been historically undervalued—and whose work has had to take on new and innovative forms for recognition.

here are some of the things my nails can do:

—push through the backs of the cockroaches that run around my room. They’re crunchy at first and then slip-smooth and soft inside. They’re fast but I’m faster

—when I lie really still in the dark I can feel my heartbeat in my nails, from the meat under the base to the sharp throbby tips

My nails are all I have left

Tomorrow they’re going to take them

Erica Waters grew up in the pine woods of rural Florida, though she now resides in Nashville, Tennessee, with her spouse and two terrible dogs named Nutmeg and Luna. She has a Master’s degree in English and works as a university writing tutor. She is the author of Ghost Wood Song, a Bram Stoker Awards® finalist and a YALSA 2021 Best Fiction for Young Adults nominee. Her second book, The River Has Teeth, was an Indie Next pick, an Amazon Best Book of the Month, a Kirkus Best Young Adult Book of 2021, and was recently named the recipient of the 2021 Bram Stoker Award for Superior Achievement in a Young Adult Novel. Erica’s forthcoming book, The Restless Dark, will be published in fall 2022.

Having herself grown up bisexual in the rural South, Waters says, “It’s important to me to write queer characters, especially queer characters who are Southern and low-income, because there are currently very few characters of that demographic in YA. It makes queerness seem like something that belongs to other people, something not accessible to you if you live in a trailer in rural Florida, if your parents are blue-collar, if you aren’t on your way to an ivy league university.”

*As quoted in the September 24, 2020 issue of Nashville Scene 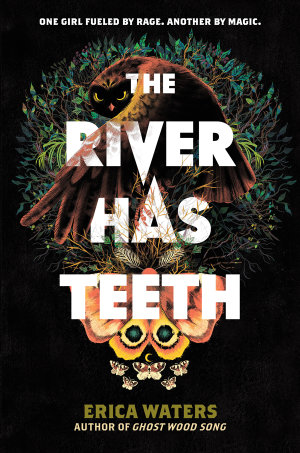 Everyone in town thinks this old prison is haunted. They don’t know how right they are.

“I’m here,” I call. My voice echoes in the predawn darkness, making the starlings stop their chatter. I shine my flashlight over the path, watching for rubble that could trip me. If I fall, she might decide I’m prey. If I fall—

“Are you awake?” I ask, pushing away the fear before it can get its roots into me. I pause, listening for her slightest movement, a single breath. There’s nothing.

The short, fine hairs at the back of my neck prickle, and I spin, ready to block a slap, a lunge, a bite. But her silhouette in the darkness is still. She’s back in her human form now, only a slight, pale woman with long, dark hair and a smell like the river at flood time. I wait for her to move, wait for her to show today’s mood. Will she be quiet and sly, or raging?

She steps into a shaft of weak light. Her hair is matted with dirt and something dark and wet. Her eyes are as shadowed as the forgotten corners of this derelict prison. A smear of dried blood turns her thin lips into a clown’s crooked smile. She comes closer and reaches a bony hand toward my face.

Everything inside me wants to startle and back away, wants to bolt. But you can’t show her any weakness, so I brace myself for her touch. Her hand is moist and cold and smells of earth. She caresses my cheek, her gaze almost gentle.

Some old blood instinct, some half-forgotten longing, rises in me. “Momma,” I say, leaning into her touch. She smiles at the endearment.

And then her hand snarls in my hair and I’m flying across the room. I catch my balance just in time to keep from toppling into a brick wall. My fingers splay over the peeling white paint, knocking long flakes of it from the wall in my hurry to spin back around. A brick barely misses my face as I turn. 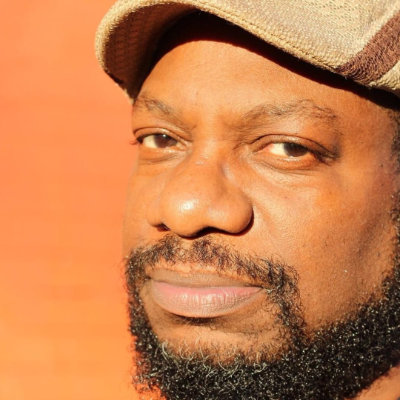 Born in Trinidad in 1971, Kirk A Johnson credits his love for fantasy (notably Sword & Sorcery and Heroic Fantasy) to watching old movies with his dad at a very young age. The very first novel he read was the Hobbit at age 8, and he was an avid fan of the Conan the Barbarian Marvel comic series as well.

He is founder of Far Afield Press.

In 2005, he began writing his own fantasy adventure short stories based on his years of enjoying and learning the genre. In 2014, he sold his first short story to MVmedia LLC for its first anthology, Griots: A Sword and Soul Anthology. He is still writing short stories, and The Obanax and Other Tales of Heroes and Horrors, his first collection of adventure stories, is out now from Far Afield Press.

Excerpt from “The Obanaax” from his book The Obanaax and Other Tales of Heroes and Horrors: 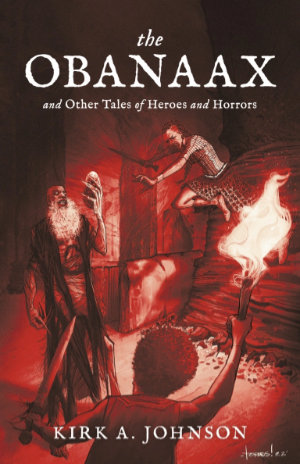 Wurri bit her lip to stifle the awe-filled wonder of her exhale. It was an ancient mark whose lore was passed down as secret knowledge. But only to the chiefs of her tribe. The chiefs and their descendants. Lore passed down from generation to generation before the forging of bronze or even before the Ungulu Ishkas gifted the Asuah with the Obanaax. This man was a Debtor. One who was cursed with paying back the ancestors of those who Heeded the Call. The ones who died to save the world from the Children of D’Yiit. An Aouzou. And, this tomb is still considered ancient by today’s counting. So he must have been the last of his people.

K.M. Szpara is a queer and trans author who lives in Baltimore, MD, with a tiny dog. His new book, First, Become Ashes, tells a story of self-discovery after trauma and outgrowing abusive origins over the course of an American road trip. Kellan’s debut alt-/near-future novel, Docile, explores the snowballing debt crisis, consent, and privilege, and can be described as “really gay.” He is the author of Small Changes Over Long Periods of Time, a Hugo- and Nebula-nominated novelette about a gay trans man who’s bitten by a vampire. More of his fiction can be found in venues such as Tor.com, Uncanny, Lightspeed, and more. You can find himme on Twitter at @KMSzpara. Click the links below to get your hands on the books, or go on BOOKS to find out more. 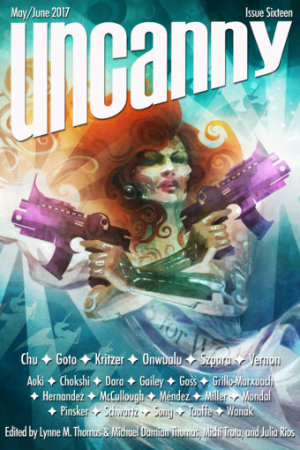 I’m trying to piss against a wall when the vampire bites me. Trying because drunk-me can barely hold a glass, much less maneuver a limp prosthetic cock.

My attacker holds me like he did on the dance floor, one arm wrapped around my chest, this time digging into my ribs. I struggle against his supernatural strength and the slow constriction of my lungs. Through ragged breaths, I inhale the Old Spice on his thick black hair, where he bows his head to grip my neck.

The sting of his fangs barely registers and what does shoots straight to my cunt—can’t help it. If I knew he weren’t going to kill me, I’d relish the shock and pain, loss of control. I kind of do, anyway. His venom numbs my neck but I can still feel the strong clamp of his jaw. Like a new piercing, my body screams to reject the intrusion. I want to stay awake—stay pressed between his cold hard body and the cold hard wall. I want him to touch me, reach between my legs. I want to stay alive.