November in Poetry: Wendy Rathbone’s “Why I Love Dark Poetry”

With extreme pleasure, I’m thrilled that our guest this month is Wendy Rathbone. She has has had over 500 poems published in various magazines and anthologies including Asimov’s and Strange Horizons, and dozens of stories published in anthologies such as: Hot Blood, Writers of the Future 7, Bending the Landscape, Mutation Nation and more. Her newest short story “I Keep The Dark That Is Your Pain” will be published in the 2014 anthology: A Darke Phantastique. Her new sf novel Pale Zenith from Eye Scry Publications is available in print at http://goo.gl/12A7lx or Kindle at http://goo.gl/oSkCw5. Her omnibus poetry book collecting 7 of her out of print poetry books Unearthly is available on Kindle here: http://goo.gl/kuDlS6. In 1999 she won first place in the Anamnesis Press poetry chapbook contest with her book Scrying the River Styx. She lives in Yucca Valley, CA with her partner of 32 years.

Why I Love Dark Poetry

Dark poetry is as old as the written word…older, in fact. Singing of the excitement of the unknown, battling and winning or losing against unseen evil, the supernatural, the mysterious, will always draw a crowd.

Seriously, the darker story is like a car wreck…sometimes you just can’t look away. It interrupts the static flow of things, the routine…brings on a shudder, makes you realize you’re alive. Some of the earliest and best known darker tales are actual poems: “Beowulf,” “The Iliad,” “The Odyssey.” Dark poetry continues throughout known history from Dante’s “Inferno” to Milton’s “Paradise Lost” to William Blake to Poe. Just about every poet has tried their hand at it even if they don’t categorize it as such. Sylvia Plath, Anne Sexton, Emily Dickinson, Allen Ginsberg, Pablo Neruda and even Maya Angelou knew this. Their writings are not of pretty, perfect times. If you’re going to tell the truth, you’re going to have horror in there somewhere. A horror writer/poet sets out to disturb or scare or turn realities on their heads. The exact same thing can be said for ANY poet worth their ink. Good poets lift the skirts of prim and proper rules, morals, and falsehoods. Horror poets do the same, yet perhaps with a more extreme nature. What a thrill. Who can resist that kind of lure?

For me, I have always been drawn to the dark more than the light. I don’t mean this in the clichéd, childish sense of identifying with or exploiting evil, although I have been known to occasionally root for the bad guy. But I mean this from an artistic perspective in the way that a shadow on the wall can be more beautiful than pure sunlight, in the way that the chill of autumn wind and patchwork leaves can fill me with more love and longing than a whole field of multi-colored wildflowers. While both can be pleasing, it is the darker twilights, the golden haunted moonrises, the journeys of “forever” that must be filled with unknown after unknown that make my heart yearn, fill me up to overflowing, gift me with the greatest thing a writer can hope for: inspiration.

For a long time now, my inspiration has been quite seasonal in its arrival. I am most inspired by and during autumn, and write more poems about those fall months than might be considered sane. When the wind blows and the candle flickers, when hanging jack o’lanterns grin at the stars, I feel that longing; the restlessness overcomes me, undoes me. My mind fills with images of naked trees, dead red planets where the wind hitches and moans in cratered canyons, underworlds of ice and flame, dancing fairy kings on November-swept knolls, bone cities and vampire cathedrals. 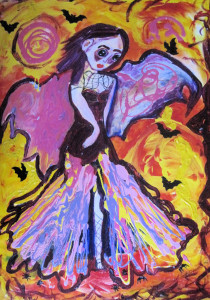 In marketing, surprisingly this type of poetry has never been difficult to sell. I consider my “leanings” not a problem but an asset, as long as I keep challenging myself to come up with new ways to speak of lost realms, forbidden pleasures, the midnight beauty of a graveyard on a hill, while at the same time making sure I touch the human heart somewhere in all my darker mutterings. As long as I followed my passion and avoided too many clichés, I continued to sell. And the best part: as long as you love what you’re doing it never feels like work.

Although I never had to force myself to write poetry, I did not always write as easily as I do now. Poetry might come in fits and starts despite love and inspiration. This is always the obstacle any poet faces, I think, because poetry that sounds forced or over-done usually fails. Yet, on the other side of that, poetry that is completely self-indulgent and lacking in effort to find the best word or phrase can come out amateurish and clichéd. I managed, for myself, after many poems and many years, to find a place inside myself where the discipline of writing did not block the deeper inspirational flow, where the inspiration could even run wild, but a now-automatic knowledge of what works and what doesn’t was ever-present because of the many years of hard study. Hard study may not have resulted in the best of poems at the time, but it paid off a bit for the future. 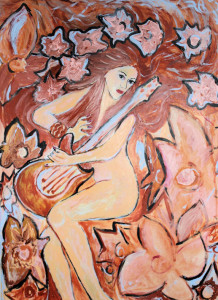 The place I write my poetry from is like a place of no memory for me, mainly because what I often write I later have little memory of writing. I have also called this “gnosis.” Whatever it is, it does not fear any blank page (thankfully!) and it writes quickly, usually at night, leaving me with poems the next morning that I have little recollection of writing. I can recall, perhaps, the putting of pen to paper (and I must admit that ninety percent of the poetry I write is written by hand in a notebook,) but the subject matter or details often elude me until I look at the page a day later and rediscover the material.

What works for me may not work for someone else, but that place of no memory is my personal haven, a wonderful discovery for myself that I probably could never teach, though I am convinced it exists in most everyone in different ways. There, the darkness actually speaks, the immortals watch, the gods listen, certain ideas cut off by our every day human programming take wing because the program is no longer there to inhibit. The inner self opens. There may not be actual concrete language that pours into the mind, but there is communication. And this communication translates into me and I translate it as a poet to the best of my ability.

The results, even if they sell or not, are always fascinating. I learn something every time I write, and it is not always about writing itself, but also about life and more than life; for me it’s about the spirit.

And that is why I continue to write poetry. Because what matters is “who” we are, and some poetry can teach that. I can’t really say which came first, the poem or the thought. Sometimes it’s the idea of writing that stimulates a thought. Other times a certain thought stimulates a poem. Whatever comes first, though, the autumn and the coming dark and the beings who inhabit those lonely places continue to talk in my head, and I continue to listen.

The clouded evening whispers:
The long night is coming!
Who will light the tapers?
Who will keep me warm
in the folds of his cloak?

(Published 2003 in Dancing in the Haunted Woodlands from Yellow Bat Press.)

the owl hatches
the wolf weeps

(Published 2000 in Autumn Phantoms by Flesh and Blood Press)

Down the Ruined Lane

In August
I turn and watch the phantoms
hypnotized by heat
slide down the thunderstruck road.
The land is sand
made of bleached bones and snakeskin.
I am worried by my ability
to perceive gods
when there are none,
when this summer is elongated
and the hours repeat themselves.
Specters float past a moon rigid with old light.
The dead dream.
I know they do
or they would not wander so…
down the ruined lane
following a dust-fed breeze.

The month autumn walks past
my window
I am learning to live
in a haunted house.
The junipers grow close to the
outer bedroom wall
yet still phantoms enter
my sleep, my dreams…
The wall clock ticks
counting footsteps, heartbeats,
the slow-moving September stars.
Quiet breaths that come
from my closet
and under the box springs
lift the air
riding dust and darkness
in a month when black leaves
ski across my roof
and the face of the moon
resembles a man
who has journeyed a thousand years.