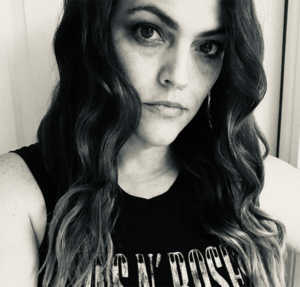 Gaby Triana is the bestselling author of 18 novels for adults and teens, including Moon Child, the Haunted Florida series (Island of Bones, River of Ghosts, City of Spells), Cakespell, Wake the Hollow, Summer of Yesterday, and Paradise Island: A Sam and Colby Story. Her short stories have appeared in the Classic Monsters Unleashed Anthology, Don’t Turn Out the Lights: A Tribute Anthology to Alvin Schwartz’s Scary Stories to Tell in the Dark, and Weird Tales Magazine (Issue #365).

Also the host of a YouTube channel, The Witch Haunt, Gaby writes about witchy powers, ghosts, haunted places, and abandoned locations. She’s ghostwritten over 50 novels for bestselling authors, and her books have won IRA Teen Choice, ALA Best Paperback, and Hispanic Magazine’s Good Reads Awards. She also writes paranormal women’s fiction under the name Gabrielle Keyes and lives in Miami with her family.

From the time I could read, I’ve written. My earliest memory is at age 5, writing my mother a dramatic note telling her I was running away from home. I’ve been writing lies ever since.

80s video stores. At 13-14, I used to hide in the horror section and rent 3-4 horror movies at a time, but I could only watch them at my dad’s because I had a TV in my room. My mother never would’ve let me rent horror movies, so it felt a little taboo. I was drawn into gothic horror when I received a record of scary ghost stories as a kid then started reading Edgar Allan Poe in junior high school. I don’t think there’s ever been a time when I haven’t loved horror.

In my 20 years of publishing, I’ve always included Latinx characters, lesbian characters, Black characters, Native American characters, etc. for as long as I can remember even before “diversity” was a thing in writing. I was born, raised, and have lived in Miami all my life. We have all kinds of people here. My writing has always reflected that. What I aim to portray is that we’re no different than white characters in that we all love, we all fear, we all worry, we all scream…and our differences only make us more interesting.

It’s taught me that we all experience fear in different ways, and no two readers will ever be alike. Serial killers, ghosts, vampires, prejudice, or systemic racism can be a person’s nightmare or a person’s joke depending on their life experiences. There will never be two horror stories exactly alike because of how subjective fear is.

It’s also taught me that there are people out there who feel entitled to judge what horror is and what it isn’t, who belongs in the genre, and who has a right to write it. Ignore those jerks.

Horror has become more inclusive, but we still need more #ownvoices. Also, I think there will always be those who’ll frown upon horror as a lowbrow genre, but overall, I think it will continue to gain respect until it’s not cool or taboo anymore, but hopefully we’ll always be weird.

I think my opinion on this differs from other Latinx authors. Today, we aim to highlight Latinx authors, Women in Horror authors, Black authors, and those from any marginalized community because our voices aren’t as included. That’s the reality. But I believe the ultimate goal is not to need that differentiation. The fact that we have to have Hispanic Heritage Month or Black History Month shows that we still have a long way to go. I don’t want to be celebrated only 1 month of the year. I want to be celebrated all year long, right alongside white, non-Hispanic authors. My hope is that one day it’ll just be all horror, all the time, no matter who writes it. All readers will pick up books by Latinx authors or Asian authors or trans authors and not blink an eye, because why should they? It’s just another story. Whereas some believe that highlighting our differences is essential to compassion, I think making those differences everyday commonplace is what inclusivity is really about.

It’s important to do your own thing, but don’t put on blinders. Know your genre and those who came before you, so you have a better idea of where you’re going. Do your homework. Read in the genre. You wouldn’t believe how many people start writing horror because they love watching horror movies. That’s great, but know your horror BOOKS and authors, too. Writing horror is much harder because you have to build dread in the reader instead of relying on jump scares or visual tactics.

And to the Latinx writers out there who are just getting started, what advice would you give them?