Halloween Haunts: The Halloween I Created a Monster by Carla McBeath-Urrutia

This was a Halloween full of parties. I, however, was a student at California College of Arts and Crafts, in the sculpture department, not so interested in parties. This Halloween, I created a true, walking, talking monster. It was fun!

Back then, I was fixated on the moment when a person sees an unrecognized object—the moment before the brain processes a combination of memories, deductive analysis processes and a range of possibilities. That was the moment I was going for in my art—that moment of awe….and horror!

I was home from art college for a Halloween break when my younger sister and her boyfriend asked if I could help make a Halloween mask for him. We’ll call him Jeff. Jeff was a tall, skinny guy with a sweet face and long brown hair. So, I got to work. I had supplies with me, as I was experimenting with a kind of artificial “skin” that I was using to create all sorts of things, mainly, pillows and sea animals. Making the ultimate Halloween mask for Jeff was going to be delightful.

My sister and Jeff were going to visit several different parties on Halloween night, so I was up to the challenge. Could I create that moment between seeing and recognition? Could I make it last a long time? What would be the result? My work had only been seen in small classes with other students and enthusiastic teachers. I had no idea how the general, partying, Halloween public—my sister’s peers—would take it.

I got to work. I poured out the material, a natural substance I had been using for a year or so, then started to work with it. My sister and Jeff were already dressed for the party circuit.  Jeff was wearing a nice jacket and pants and my sister was in an allover Bugs Bunny costume. All that was left was Jeff’s mask. I created the mask all over his head, allowing for some hair to stick out. This was no drugstore Halloween mask. I was using a technique I had used in art school that already had intrigued some tough critics. Now, I was adapting it to a living human head. Finally, I poked a hold through, for one eye. It was diaphanous in places, clumped everywhere, and was the color of dark, yellow human skin—not a healthy yellow, either. I achieved the dimensional effect I wanted, added a flourish here and there, and sent them off—my experiment. 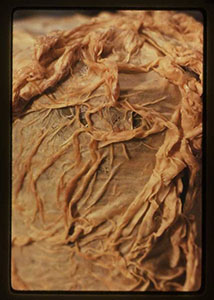 When I see something I do not immediately recognize—an animal, a sea slug, something crossing the line between flora and fauna—I am fascinated. I enjoy my moment of awe before my brain interrupts it with a memory identifying the object from an article I read. Even though I assumed everyone would react similarly, or with hilarity, they did not.

I was shocked later to find out that everywhere Jeff and my sister went, they scared people. These were all adults, post high school. Drinking age. When they rang a doorbell, and the door opened, the unwitting person in my experiment failed to see the tall blond woman in a head to toe bunny rabbit costume holding a carrot. They saw something they could not recognize. Was it real? If so, was he a burn victim, a horribly burned victim? Was he a monster? Not only did they scare easily, several slammed the door on Jeff and my sister. Finally, after some negotiation with their friends, Jeff and my sister convinced a few brave ones to look closer so they could see Jeff’s real eye peeking out of the “skin”.

Luckily, Jeff, with his twisted sense of humor, added to the character with a strange voice and an odd posture. He also thoroughly enjoyed the experience. At some point, however, some friends still did not believe it was Jeff and stayed away from them the rest of their stay at that particular party.

All in all, it was a successful experiment. It created a moment of awe and horror, with horror being the dominant effect. It completely proved the premise of my experiment, which has stayed with me my entire life. I concluded, and I stick to this, that people are, basically, wimps.

Later, I recreated Jeff’s mask on a green bucket. The bucket scared everyone it met.

Carla R. McBeath-Urrutia is an American writer with eclectic tastes. She found a taste for horror in art college, and 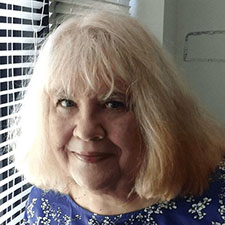 created numerous bizarre objects, as part of her sculpture portfolio. After moving from California to New York, she became serious about writing. In June, 2021, she published a nonfiction book based on her lifelong experience living in studio apartments and small houses, How to Find and Love Your Small Space, Outfit Your Small Gourmet Kitchen, Furnish Your Amazing Space Using Wellness Colors and Store All Your Stuff, available on Amazon. Recently, Carla has become interested in how colors can heal moods. She just earned a Certificate in Light and Color Therapy from the Holistic Arts Institute, in California. Carla credits her wonderful mentor, Cathy Jordan, with keeping her on track to publish in the horror genre. So far, she is one-third through a novel, Barney’s Beautiful Buzzard Emporium, and is revising a short story. Carla lives in Manhattan with her Peruvian artist  husband, and works at a children’s bookstore, Books of Wonder. Her website is Writer Carla R McBeath-Urrutia (authormcbeath.com)