Halloween Haunts: Sounds of the Season by J. Rocky Colavito

The challenge flitted across my Facebook feed this morning, and it reminded me that it’s time to start planning Halloween assignments for my three classes. Since the students are just as valuable as the textbooks, I must ponder how to get them to teach me something and give them an exercise that I’ll enjoy doing as well. It is that time of year, after all, when the sounds of haunting takeover the airwaves and wideband. So, the challenge puts spur to my planning.

What’s the challenge; let’s compile a playlist of scary songs!

I fully expect to get a mix of death metal (anyone wanna visit “The Chapel of Ghouls”?), punk (”Last Caress”), rap (“Sumthin Wicked this Way Comes”), old standards (let’s get down to the “Monster Mash”), and maybe some comedy stuff they might have scrounged from the depths of Dr. Demento (How do you not include the ode to necrophilia, “I Want My Baby Back”?). Clever students will suggest rockabilly songs; Halloween rockabilly/psychobilly is actually a thing (check out Jackie Morningstar’s “Rockin in the Graveyard”; it’s killer!).  But me, I’m gonna go with a golden oldie, one that never fails to unnerve me whenever it pops up in my song rotation.

And believe it or not, it’s one that I can use as a teachable moment, though I won’t bore folks with that dimension here. Suffice it to say that if you’re ever seeking a story, poem, or script involving the loss of personal autonomy or puppet mastery, give this one a listen.

I’m speaking, of course, about Screamin’ Jay Hawkins’s version of “I Put a Spell on You.”

There will be debate, but you can keep CCR’s version of the song. Don’t misunderstand, I like Creedence; I can’t listen to “Bad Moon Risin’” and not think of American Werewolf in London, and I think the Thomas brothers missed an opportunity by not including “Run Through the Jungle” for inclusion on the Predator soundtrack. I’ll pound the table for including it in the next remake of “The Most Dangerous Game.” But, with respect, their version of “I Put a Spell on You” doesn’t hold a candle to that of Screamin’ Jay.

Screamin’ Jay’s accompanists hammer the listener right from the start, dun dun dun dun dah dah with a steady repetition, backgrounding the drum rasped voice of the artist. Two verses in, a saxophone overlays the repeated beat. The sax cuts off abruptly, so listeners once again are assailed with the bellows from Screamin’ Jay. The song only lasts a little over two minutes; by the time he’s done the listeners know they’ve been listening to that voice that gives form to the creepy thoughts going in in the heads of those secret, unknown folks that lust us from afar, or maybe even in close proximity.

While I don’t think that fair use covers the presentation of actual lyrics here, I can give you some insight into the song’s power to unsettle. Images of power, loss of autonomy, ownership, revenge, and infidelity interlace the music. The shrieks and maniacal laughter elevate the lyrics; the interjections suggest a conjurer who is proud of himself for ensnaring a reluctant object of his affections via magic, or maybe voodoo given the title of one of Screamin’ Jay’s albums. The repetition of the chords and rhythm are hypnotic, casting a spell of mesmerism, well in tune with the lyrics themselves. But it’s the laughter that pulls it all together, a guttural, crescendoing, evil chuckle fit for any collections of Halloween sound effects. All the mad scientists who’ve ever committed their laughter to sound have nothing on Screamin’ Jay; he could probably teach them a thing or two.

In an age where stalking is an ongoing concern, and with stalkers often emboldened to act out their fantasies, the song takes on more depth. Maybe when it came out in the fifties, it might have been used to reference stranger danger, which is what stalking has become in the social media age. We hear words today like “grooming,” “followers,” “cults”; they all embody the spirit of this song. Those words sound spookily close to what happens when spells are cast that cloud minds. News media is no different; their partisan spells delineate the differences, destroying the possibility of middle ground or compromise. It’s Halloween all year round it seems.

I play the song for my students, and they laugh at Screamin’ Jay Hawkins; calling out his voice and the simplicity of an “oldies’ song, not noticing the import of the words, or their currency. What’s behind the music is stronger than ever, and still very powerful. Screamin’ Jay Hawkins had it right in the fifties; the spell that saps one’s autonomy and puts them in the thrall of another is something to be feared. And it’s even more powerful now.

So, at this time of year, you can have your snuggle in the theater for a “Thriller,” your sing along to “Ghostbusters,” your dance along to “The Time Warp,” chowing down with “The Purple People Eater,” and even a prescription from “The Witch Doctor.” Lose the lights, watch the candle flames dance in the breeze from God-knows-where, and give a listen to Screamin’ Jay Hawkins’s version of “I Put a Spell on You.” Ain’t nuthin to lose, but your mind (cue the thunderclap, lightning sizzle, and super ominous laughter, courtesy of the artist, hissownself). Pleasant screams . . . 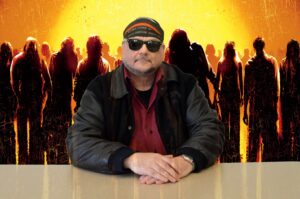