Maybe I love Halloween because I was named after a dead kid. Maybe my fascination with horror comes from the same root. I think about these things between July and October. Where I’m from in Ohio, summer football practice and Halloween are just plain linked in one big thing we call Fall. This year I’m thinking about those links in a new way, and the links to why we write what we do. Years in, do we know all of our influences? Do we want to?

It’s all thanks to a story Dad told me this summer, if not for the first time, then in a way that made new links. Hard ones.

Like Doc Holiday, this summer Dad moved West for his health. We helped, me and younger Bro—Mom died a few years ago, suddenly. We had to move him from northern Ohio to the Rockies. One of those 14-hour, body- and mind-draining days of packing up a family’s entire life, the Bro worked on real estate stuff while I drove Dad to do those things you do before you leave a place for the last time. That required us to go to Wellington, Ohio. Twenty miles south of Lake Erie, the farm town is cut down the middle by Route 58 and its McConnell Meats and Flea Market, Country Skateland, and constant smells of field mowing and drying manure. Wellington is also the first place Donald Trump held a rally after he lost the election. Draw the picture that you will.

Wellington is the setting for my name story, if four decades ago. It came back to Dad as we rolled down 58 in midday sunshine, the kind you forget is possible during each of Ohio’s nine-month winters. In the early 80s, Dad and Mom worked in Wellington as high school teachers and coaches. He coached football and they both coached track. This was the early days of their relationship, with high points like the lets-get-drunk-cause-we-all-just-got-fired parties young teachers had to throw those days, often. They also, speaking of high points, had a favorite student. By far.

Now, I’ve known the basics of my name and where it comes from for a long time. I remember some early grade—second, third—when everyone had to share the reason for or meaning of their name. While some kids just shrugged, I was ready. I raised up tall. I knew I was named for Michael Bryant and why. But when I finished, most of the other kids said nothing. One, I think, started crying. 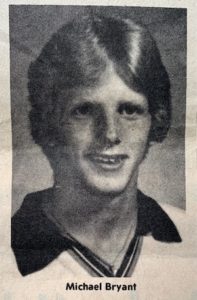 Mike Bryant was special. As we passed the old drive-thru liquor store and the new Walmart, Dad described him as a “West Point kind of kid, you know, manners, morals.” Mike was popular. He got good grades. He was a hell of an athlete. Supposedly he broke the school’s 100m, 200m, and 400m records—as a freshman. His family was strict in their religion too, Dad said, maybe Jehovah’s Witnesses. Strict as they were, they were “super nice.” Dad swam in their pool, a nice thing for a new teacher, any teacher, to be invited to do. While he told me all of this, we also closed on Wellington itself, leaving the barns and corn silos for country houses. Dad, more animated and clearer than he’d been in years, shouted.

The white and black ranch with too many cars in the driveway and kids’ toys in the yard sat maybe a hundred feet back from the road.

I’d never seen it before.

“I drove him home every day after practice,” Dad said, a little quieter. “Except that day.”

I hadn’t known that either. Isn’t that getting older? Realizing how much you don’t know?

The day in question was the first day of summer football conditioning (a hell I’d face decades later), which would fall in July. For whatever reason, Dad didn’t give Mike a lift that day. Instead, Mike rode his bike.

But on that day in 1980, Dad couldn’t just cruise around the curve with his rock’n’roll jamming, more or less ignoring the sides of the road. He couldn’t, because he saw a crumpled bike on the berm, which, I imagine, left it partially obscured in the tall summer grass.

When he found Mike a ways from the crushed bike, the boy, just a sophomore, had horrid scrapes all over his arms. He also was also bleeding terribly from his head. Someone managed to get an ambulance. Dad rode with Mike to the hospital. He even talked to the kid’s parents, maybe before anyone else.

Dad remembers Mike’s brain bleeding and swelling so much the doctors wanted to do a procedure to relieve the pressure. But it didn’t happen—supposedly his parents said no. It was against their religion.

Dad was still there.

I didn’t know what that meant.

The driver who’d hit Mike was drunk. But he wasn’t caught for what he did to Mike. He hit something else before the cops finally tracked him down. He went to jail. Dad doesn’t remember his name.

I was born in 1981. As I understand it, there was little debate about my name. And from super young I knew about Mike Bryant. One of my parents’ favorites. Riding home from practice when killed by a drunk. A dead kid.

I didn’t know the rest. Not what he’d been like. Not about his family. Not the swimming pool.

And nothing about Dad being the one who found him. Or the hospital. Or his parents. Or 9 a.m.

Since I got back East, I’ve been trying to track down facts. I’ve got some press clippings in my baby book. I also googled all kinds of things but got little back. On a random message board, I did find this:

The entire ‘74 team and, in many opinions, the potentially greatest athlete that would have ever graduated from Wellington, Mike Bryant, who was killed riding his bike home from his soph. year 2-day football practice by a drunk driver. To this day, we still can’t imagine what could have been.

I doubt Dad’s memory. Half his age, I doubt my own. Take that bit about the classroom and making the kid cry. I remember that, but was it really second or third grade? And do I remember it because it’s real, or because it feels real?

I’m not sure it matters. Mike’s story has already had its impact. It has for my lifetime. I learned it young and have thought about it maybe more than I should, especially as football and summer turn to Fall. And Halloween.

You see, for years I was sure I was going to die young. Mike’s name was a mix of a curse and fate. Halloween made me feel okay about that, strangely; it helped having a celebration of ghosts and the dead. Then, when I lived past 15, that changed. I started to feel deeply that I had to live enough life for two people. It seemed like a special and honorable burden. It left me obsessed. Driven. Haunted.

Fuck, Mom gave me the middle name Aeneas to boot. Talk about things to live up to from a young age, with trauma just flooding the background. (Grits teeth emoji.)

Which brings me back to Halloween. I don’t know how Mom and Dad handled that first Halloween, being in that school, in the months after Mike died. I do know that Mom got us started on serious Halloween costumes pretty early. Part of that big Fall in Ohio. By the time I was ten, I’d already been Spock, Indiana Jones, and Death with a sword.

I kept up the costume tradition, the Halloween worship: Doc Holiday, Edward Scissorhands, the Joker, Jack Sparrow, Two Face, Jareth the Goblin King, Shredder. I am a serious Halloweener. I even went to Ohio University, home to one of the largest annual Halloween parties in the U.S. I’ve heard the student population of 20,000 swells to 100,000 in that weekend alone. See it if you can. Nestled in the Appalachians where it gets foggy, it’s ghastly in all the right ways.

I also write horror and have since I started scribbling. I have a deep well for writing horror—because of Mike. A leaning towards tragedy and terror from the start. Horror is so inborn I can’t really write much else without veering towards things with teeth and bad stuff in the dark.

But here’s the analysis part, the epiphany and all. What are all those costumes? The fictional frights? The pen names?

Like old Samhain, do I wear costumes and love Halloween because I’m always hiding from bad spirits? From Death? Did Mom do it too, dressing me in costumes because she was trying to hide her firstborn from Death, that which she’d named him for? (Did I mention she became a psychologist?) Is each story I write just one more way to ward off the d(r)ead? To stop thinking about the curse?

Because beyond the tragedy of Mike Bryant, the burden of living for two, there is the Fear.

I’m still scared I might die young(ish). As I creep up on midlife, I can’t shake the sense that I’m fated to go out early. And I don’t believe in fate or curses for one second. Still, every time I get in my car, I wonder if it’s going to be the day. Mine is a black, American Muscle sports number—it might as well be named Questionable Decisions. But I drive it carefully and it’s got AWD, so, you know, it’s practical. I don’t have a death wish. You may hear evidence to the contrary, but I’d be pissed about such a self-fulfilling prophecy. Lame ending.

But it is my well. It is my deep fascination with Death, to the point my wife and I can’t accept any more skull art, having reached a worrisome peak. It is my LOVE for Halloween, costumes, horror movies, and tales of terror. It is what drives me to build the next costume starting in early September (otherwise I’ve started late). And it keeps me writing. Boy does Fear keep me writing. It is my well and I’ve tried to deny it, tried not to be the boy always attracted to the gloom, looking over the hill for wolves. But by accepting it, I’m just more at peace. If I have any advice, whatever be your well, don’t fight it. Drain it for all it’s worth. It keeps the gloom and wolves away.

Sometimes I imagine the seconds before the crash that finally gets me. I feel like I’d smirk, unsurprised. I wonder if I’ll see Mike in the passenger seat. Will he say thank you? Or will he shake his head and smile, maybe a little sad. Is this clinical paranoia? A narcissistic trip? Maybe. It’s also true.

But if I’m smashed to guts and bone just a day after this is published, maybe that’s okay. I’ve never told this story before, not even used it in fiction. Sure, I’ve shared the basics, but never like this. I didn’t even know it.

So, an exorcism? A step away from trauma? A good deed?

Or just some plain old storytelling as we ramp up for Halloween?

I don’t know, but I hope your ghosts treat you gently. And I hope your Halloween is everything you need it to be.

Michael Rook is a member of the Horror Writers Association with recent publications in Penumbric Speculative Fiction Magazine (Oct. 2021), Teach.Write., After Dinner Conversation, and Buckshot Magazine. More stories are on the way, including a novel or two. And though his parents named him after a ghost, he doesn’t blame them for the sleepless nights. Find him on Instagram (@michaelrook10) and at his website: www.michaelrookwrites.com.

Penumbric story, “Boundless Vendettas” (to be published in October 2021): https://www.penumbric.com/