When I was a girl, I loved the “B” horror films of the 1950’s. My dad introduced them to me and I enjoyed the terrible acting, cheap sets, and silly gimmicks. Even today, the letter B raises images of Vincent Price, The House on Haunted Hill, William Castle, and a myriad of other screen goodies. We always watched them on Halloween and they never failed to amuse me.

Until I lived one.

Did dramatic, spooky music run through your mind? Did a chill run up your spine? It didn’t? Humph! You’ve been watching too many Blair Witch movies. Anyway, let’s get down to my “B” movie experience—dun, dun, daaaaa—The Killer Pumpkins.

My story begins in the year 1993. It was the month of April and my mother had grown several pumpkin seedlings to plant in our garden. Small, green leaves peeked out of peat pots. They seemed innocent enough.

“Where should I plant them?” I asked my mom.

“Make a raised bed using the cow manure your dad bought. Cover it with black plastic sheeting and poke holes in it. You can plant the pumpkins in the holes.”

“Take these cantaloupe and watermelon seedlings. You can plant them too.”

I followed my mom’s instructions.  The plants received water and warm sunshine every day but, as they grew, I noticed something strange. The pumpkins, now large and lush, had grown long vines. They covered the black bed. In the lower right-hand corner, the watermelon and cantaloupe grew at their own pace. They were small but they were flourishing. I thought nothing of it.

Maybe, if I had, the murder wouldn’t have occurred.

The next morning, when I checked on my charges, I found a frightening sight. One of the pumpkins had snaked out toward the cantaloupe during the night and like a boa constrictor had wound itself around the melon plant. I freed the victim from the clutches of the strangler and removed the vine from the area. The watermelon and cantaloupe seemed relieved. They straightened up as I walked away.

I should’ve gone back.

Teenage things distracted me for a few days, and the morning I returned to my garden brought a nasty shock. The pumpkins had run over the bed and completely blanketed it. Large leaves had covered the corner of the bed where the melons resided. When I lifted the vines and leaves I found nothing.

The watermelon and cantaloupe had vanished without a trace. Nothing remained, not even a shriveled stem or a yellowed leaf.

I searched among the vines for my poor plants and found nothing. The killer pumpkins had destroyed all the evidence.

I kept a close eye on them after that. Every day they moved off of the bed and into the garden. I found them reaching toward the peas once and promptly moved them back. They never killed another plant on my watch.

The pumpkins had born fruit during the summer and as the days grew cooler, the monsters morphed from green to orange. I picked the largest one, which weighed in at ten pounds, and took it inside to carve for Halloween.

It was easy to cut through the pumpkin flesh and as I began fashioning it into a jack O’ lantern, something small and green attracted my interest. When I pulled the thing out, I discovered the remains of a tiny watermelon.

Ever since that day, I’ve stayed clear of pumpkin patches. I watch their small tendrils with suspicion and I wait until they’ve died away before harvesting. You see, I found something out the hard way. Pumpkins are ki 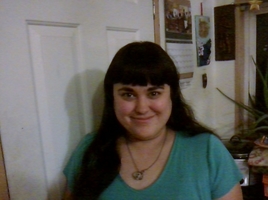 llers and, if they grow tired of murdering other fruits and vegetables, there’s no telling what might happen.

We could be next.
(By the way, I never found the tiny watermelon inside the pumpkin. But, what would a “B” movie be without a twist?)

Naching T. Kassa is a wife, mother, and horror author. She’s created over 15 short stories, two novellas, and co-created two children. She lives in Eastern Washington State with Dan Kassa, her husband and biggest supporter. Naching is a member of the Horror Writers Association and a contributor to the Demonic Visions series. Her latest work can be found in Demonic Visions 50 Horror Tales Book 6. It is the tale, “Daddy’s Girl.” Her work is available at Amazon.com https://www.amazon.com/Naching-T-Kassa/e/B005ZGHTI0 and you can follow her ramblings here: http://frightenme.weebly.com/