A lifelong “Halloween People” myself, I connect Halloween with libraries, and do so for several reasons.  Each year I have the great pleasure of writing and directing a Halloween Haunt in my university library, working with the librarians and student performers.  We’re in the tenth year of doing this.  As the exhibit is about “Difficult Fairies,” we have created Haunting of Hannon X: Widdershins.  We have Chinese fairies, Filippino fairies, Vietnamese fairies, Mexican fairies, Irish fairies, Welsh fairies, Scottish fairies, and all of them are terrifying. The audience walks through the library in groups of ten to twelve through fifteen scenes (not just installations of folks jumping out and yelling or screaming, but five minute scripted scenes), walking widdershins (counterclockwise) through the building in which they hear stories, see the revenge of a changeling child exposed, hear a Bean Si, and meet all sorts of scary fairies, until they open the gates to the basement.  Then the terror kicks up a few levels.  I wrote about this library event back in 2016 for my first Halloween Haunts post.  We’re already planning year eleven and I am excited to write and direct that one, too.

But growing up in small town Connecticut in the seventies and the eighties, the public library was the secret year-round Halloween home for a horror nerd kid.  Even in the middle of summer at Cheshire Public Library, whether in the children’s section or adult section, this precocious (and proud of it) child knew that in the Dewey Decimal System, ghosts are found at 130. (Later in college I had to learn Library of Congress cataloging, but for a long time, 130 was my favorite number). I read every book the library had on ghosts, bigfoot, UFOs, unsolved mysteries, strange occurrences, monsters, and all the surrounding volumes.  They had a complete set of Man, Myth, and Magic:  An Illustrated Encyclopedia of the Supernatural (yes, please!) – one was allowed to borrow one volume at a time.  Even as a child, I’d just look at the pictures and be inspired.  Then, when I was in high school, they added the Time Life series Mysteries of the Unknown and The Enchanted World.  The fiction section also catered to the tastes of a strange kid (although if memory serves, my mother had to give permission for an eleven-year-old to borrow Stephen King books).  Some of what we now call Middle Grade and YA fiction from the “older kid” section of the children’s room shaped my experience of the uncanny.  It was at CPL that I first encountered Lovecraft, Henry Kutner, Frank Belknap Long, M.R. James, and other classics of the weird tale, often in oddly illustrated paperbacks aimed at younger readers in the seventies.  These books would be borrowed and read again and again.  Some of the contemporary stuff also fueled a young imagination.  I remember one story of a tough teenager who thought it would be cool to hide in the local stadium overnight, until he begins to get chased by something he could not see. “Just as the sun began to rise, he looked back and saw what was chasing him.” His body is discovered a few hours later, his expression showing he had been frightened to death.  WHAT!?!?  Here I am wrapping my head around vampires, zombies and ghosts and there are things that if you see them will scare you to death?  New concept. Mind blown.  More, please.

However, the three greatest books in the entire collection of the Cheshire Public Library were the Usborne The World of the Unknown series. Three brilliant paperback books: Ghosts, Monsters and UFOs.  These books were good old fashioned nightmare fuel and still perhaps the best books I have ever read on the unknown.  Of the three, Ghosts is my jam, my jelly, my peanut butter and my bread. Monsters was cool and fun; and UFOs had some great stories, but Ghosts… 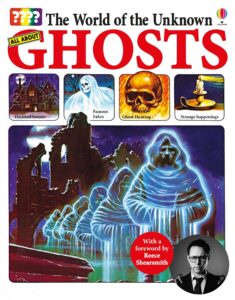 The images, the stories, the scope and depth of a 32-page book was thrilling.  The lavish illustrations – from the line of ghosts monks on the cover to the leaping, slavering, one-eyed Phantom Hound Black Shuck, to the ghost of Caesar pointing at Brutus, to the rotting corpse hanging in a gibbet at a crossroads to confuse the ghost, to the photo of the Brown Lady of Raynham Hall and (especially) the photo of the spooky, masked monk, the Spectre of Newby Church, which the book explains must be at least nine feet tall.  The tales from all over the world – the nailing of the Afrit, from the Middle East, simply illustrated with a pool of blood on the ground and a pair of hands holding a spike and a mallet.  Wonderful stuff for a Halloween child, year ‘around.  And there, towards the end, a two-page spread on how to know if a house is haunted with circles numbered one through twelve to show what happens in a haunted house, as well as an illustrated explanation as to why ghosts walk through walls.

Silly though it may seem now, Usborne’s Ghosts seemed not just to thrill but to offer genuine explanations as to the how and why hauntings may happen, and even distinguished between how different cultures understood ghosts, and did so in a way comprehensible to the average ten year old. As I listen to podcasts now, it amazes me how many people, when asked about how their interest in ghosts began, mention the Usborne Ghosts.

Which is why I was delighted when the books were reissued in 2019, and accordingly I snapped them up.  I allow my children to look at them, so they, too, might find delight, fear, and fun in these wonderful books, but I insist on reminding the kids that these are mine.  I mine them for story ideas still, I reread them to remember the frisson of fear I felt as a kid seeing it for the first time in the library, and I celebrate them for making everyday Halloween when one is a little kid in love with the dark. 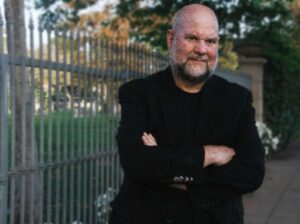 Kevin J. Wetmore, Jr. is a four time Bram Stoker Award nominee and the author or editor of over two dozen books including Eaters of the Dead, Devil’s Advocates: The Conjuring, Uncovering Stranger Things, The Streaming of Hill House, and Post-9/11 Horror in American Cinema, as well as over a hundred articles and book chapters on everything from Godzilla on stage to the economics of haunted houses, as well as several dozen short stories.  He was the recipient of the 2022 Silver Hammer Award from the HWA and is co-chair of the Los Angeles chapter.  His latest books are Theatre and the Macabre (co-edited with Meredith Conti) and The Many Lives of the Twilight Zone (co-edited with Ron Riekki), just released this month from McFarland. 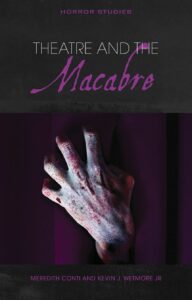 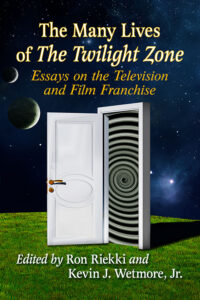