Halloween Haunts: If That One Halloween Didn’t Kill Me… by Brandon Ketchum

…I might yet fall victim to a future Friday the 13th.

One night, long ago (the early ’00s), in a place not so far away (Erie and Edinboro, Pennsylvania)…

My late best friend, may he rest in peace, once shared with our little college group a wicked cool tree. This huge, gnarled specimen of unknown species invaded the ground with dark, barky tendrils; from its colossal bole-torso reached giant, twisted limb-branches; in the fall, these bare branches extended into thin, insidious offshoots ending in skeletal wood-fingers and bark-nails. All ’round this Witch Tree, as it was dubbed, lay the detritus of dead leaf-skin, golden blood in tinge. Normally an enjoyable place to hang out and soak in its natural splendor, the Witch Tree became a deliciously spooky sight under the right conditions. On Halloween, those conditions coalesced into a fog so impenetrable that we found it difficult to physically pierce, let alone see through.

Not at first, however. No, the night began rather tame. Four of us headed to my best friend’s childhood home in Erie, in our finest Halloween duds, to give out candy to the local kiddies. Our All Hallows’ Eve duty done, we plunged into the local woods to behold the Witch Tree on the perfect night of the year–or so we thought. With barely enough illumination to guide our steps on the well-worn path, we beheld a darkling sky through the Witch Tree’s looming reaches. Desperate for the merest hint of moonlight to save us from the smothering darkness, the air itself turned on us, as the atmosphere became thick, almost gagging us with the closeness of some invisible presence. A ghostly white luminescence at first granted us limited sight, then blinded us within an oppressive fog. The mist shrouded the Witch Tree in horrific mystery, as if the tree’s own towering presence were not horrifying enough.

Now cut off from the world and the tree, we could only retreat, imagining the terrible ends we would meet at the hands of the Witch Tree, reaching along the path to pluck us from the mortal realm into unknown, Cenobitian dimensions. The thrill of terror was palpable in our racing hearts and our stumbling flight away from that awesome monstrosity. How incredible! Oh, what human minds can do to themselves, and what fun can be had from such self-torment! We giggled like drunken goblins, running away. Were we foolish to laugh at our fears? Were we, unknowingly, in a Stephen King story? Well, no bodies hit the ground; nothing snatched at us from the mists as we emerged from the woods. Halloween had spared us…for the time being.

Our return to campus provided the perfect fuel for nightmares, the perfect environment to cover dark, demented deeds. Though the campus spread before us, we couldn’t see it. While tricksters and treaters flitted amongst us, they were as ghosts in another realm. As the tower in which I resided loomed large above us, its lights remained shrouded behind a foggy veil, the tower itself invisible. The selfsame ubiquitous fog that masked the Witch Tree devoured our collective vision. As driver, I had to find the parking lot by feel alone, tires thumping as my vehicle jumped the curb. What awaited us outside the thin metal walls, such inadequate physical barriers? What lurked in the misty depths of the parking lot? What menacing entities or murderous mortals might ambush us within the hidden tower? We had only to exit the vehicle to discover our prowling doom. Or to regain the land of the living and begin the night’s macabre festivities. We fools were determined to party. And alcohol surely could only worsen our circumstances on such an ethereal night; or would it numb our torments? Oh, if this Halloween didn’t kill me…

A footnote: One of my friends present that evening was a photographer. Latterly she took some chilling snapshots of the Witch Tree. I thought of imploring her for one of those pics to include in this post, but the effect of beholding even the reproduction of that eldritch tree…let’s just say I don’t want to be the cause of any unwanted sanity checks.

Brandon Ketchum is a speculative fiction writer from Pittsburgh, PA who enjoys putting a weird spin or strange vibe into every story, dark or light. Brandon is a member of the Horror Writers Association. His work has been published with Air & Nothingness Press, Perihelion, Mad Scientist Journal, and many other publications, and has won Writers of the Future Contest honorable mentions. Brandon leads the Pittsburgh Writers Meetup Group, and coordinated the 2019 PARSEC Short Story Contest.

Go to www.brandonketchum.com and click on the Publishing History tab for a list of stories and where to read and/or purchase them. Find Brandon’s short story collection, Legio Damnati, at Air and Nothingness Press: http://aanpress.com/aanorder.html#legio

See below for a preview of Legio Damnati… 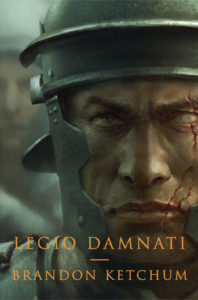 …Centurion’s tents were so small the decanus had to stand in the entrance, blocking off the outside world. The man trembled like a mouse beneath a swooping hawk, which took Verum aback. This coward should have been the most hardened soldier in the century!

“What in Tartarus is wrong with you, man?”

The decanus found a moment of stillness. “There’s been unrest amongst the men, sir.”

“Only natural, under the circumstances. I’m not well pleased at being walled in against Alesia, but you don’t see me pissing myself.”

“The circumvallation is actually a welcome relief.”

Cutting off our only retreat’s a relief?

“New prayers spring up in the ranks all the time,” Verum said. “Mystery cults, standard worship. Why, I once heard of a legionary who revered a god of boots.”

The man eyed Verum up. “Don’t know how your predecessor died yet, do you?”

A sword point squelched from the man’s chest; blood bubbled from his lips. Clamor erupted outside. The decanus fell off the sword, revealing a grinning legionary with a bloody sword looming behind.

“Mutiny!” Verum screamed, drawing his own sword. Not in time to avoid a downward cut. He angled his head so the blow glanced from his helmet. The surprised legionary wasn’t in time to parry Verum’s thrust. He died poorly, thrashing and howling like an animal. Verum danced clear as the other’s sword flailed until he fell. Verum’s chin suffered under the too-tight metal.

Another legionary blocked his way. The man wore a strange crown made from woven rushes. Verum ordered him to surrender. The legionary hooted amusement—literally an owl’s hoot—and lunged forward. He hadn’t the training Verum received from childhood on, so Verum dispatched him in moments.

Outside, chaos ruled the camp. Legionary slayed legionary. Clumps of men strove to get into formation, limned in flickering firelight. Verum knew none of his men save the lone servant who lay dead at his feet. Some of the legionaries wore rush crowns like the man he’d slain. With only this to go on, he flung himself into the fray…