As a fan and writer of horror, I tend to look for and find the horror in everything. From romantic comedies to presidential debates, I can somehow see the terror, the dread, and the worse case scenario in all stories, real or imagined. But when it comes to my favorite science fiction franchise, Star Trek, the search for horror, both dark and scary, is never difficult. Not the dystopian horror of 1984 or The Hunger Games, but good old fashion B-movie creature feature Halloween horror; vampires, zombies, shape shifters, body snatchers, and even serial killers can all be found in Star Trek.

So when you go to select some Halloween entertainment on this hallows eve, forget Freddy. That nightmare is over. Jason and Michael, give them a rest this year. This Halloween after the trick or treating is done, and the orange glow of jack-o-lanterns have been extinguished, settle in on the couch, dim the lights, and watch Star Trek.

The following list of episodes is a mix of some of my personal favorites and those suggested by followers of the Night of the Living Trekkies Facebook page. 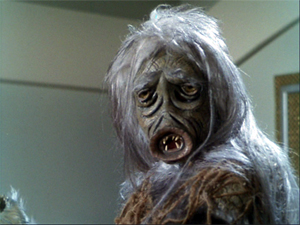 The Enterprise is sent to investigate a series of deaths on a mining operation on Janus VI by an unseen creature that can burrow through solid rock.

Star Trek TOS, Season 3 episode 4
And the Children Shall Lead – Children of the Corn / Possession

The Enterprise reaches a Federation colony where the adults have all killed themselves and the surviving children play without care.
Episode Preview https://www.youtube.com/watch?v=-dtaAcg7OEw

Star Trek TNG, Season 4 episode 17
Night Terrors – Nightmares and reality collide
Adrift in unfamiliar space, the crew of the Enterprise are unable to dream while asleep making their waking hours a nightmare. 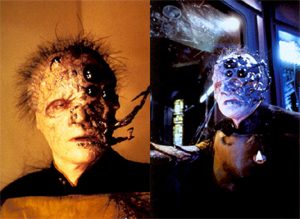 A miscalculation of a medical treatment by Dr. Crusher causes members of the crew to de-evolve into prehistoric creatures.
Episode Preview https://www.youtube.com/watch?v=ork5m37Nhnk

The Voyager crew tries to rescue aliens trapped in a bizarre computer matrix that controls inhabitants with fear and terror.
Episode Preview https://www.youtube.com/watch?v=4A1aRnHGHXo

Riker’s reality begins to fall apart within the padded walls of an alien insane asylum. 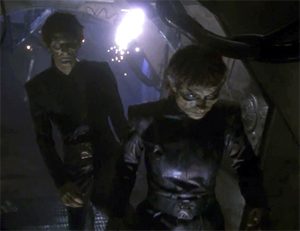 Impulse – Zombie-like drones
The Enterprise responds to a distress call from a Vulcan ship and are attacked by the horde of brain damaged undead-like survivors.

Star Trek TOS, Season 2 episode 14
Wolf in the Fold – Jack the Ripper
Scotty is accused of murdering young women, but as Kirk investigates, a serial killer from Earth’s past becomes the prime suspect.
Episode Preview https://www.youtube.com/watch?v=IsA4Egj3f08 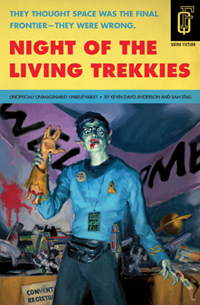 An alien species has a very unique and terrifying way of breeding, and Geordi La Forge is their next victim.
Episode Preview https://www.youtube.com/watch?v=1xLRU-o7Fig

Star Trek TOS, Season 2 episode 13
Obsession – The Boogeyman
Kirk is confronted with a monster from his childhood, a murderous cloud-like entity, and becomes obsessed with its destruction.
Episode Preview https://www.youtube.com/watch?v=ayidqRZ5Qpg

Star Trek Voyager, Season 6 episode 25
The Haunting of Deck Twelve – Spooky Campfire Stories
While Voyager is without power for several hours, Neelix tells the children a ghost story of the events that lead up to their current situation.

Star Trek TNG, Season 6 episode 5
Schisms – Alien Abduction
The crew is having shared nightmares and memories. Their search for answers leads them to discover the terrible truth. 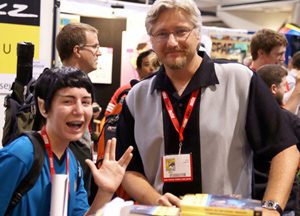