Halloween Haunts: “Blood & Dust” by Jeffrey LeBlanc and “The Spider” by Julian Machen”

On this most hallowed of nights, chilling winds howl from hurricane ravaged swamps. These same night winds carry the cry of wolves on the windy peaks of werewolf-haunted Blood Mountain. Twisting torrents of leaves dart and swirl as bats in the waning twilight. They flicker and flash colors of crimson, and golden orange, just as the ghostly harvest moon reaches its zenith. Down in the bayous and down in the valleys, ghastly ghouls, vampires, and wraiths lurk in the ethereal mists of graveyard and crypt waiting to pounce. Many more lurid monstrosities lumber down cobblestone streets tricking or treating.

Test your nerves this night! Release the hounds of Hell as you stumble through haunted landscapes where all manner of the supernatural dwell. Unleash the macabre witch’s queen—Halloween!

Devilishly devoted to horror may you always be.

Happy Halloween HWA family! We want to share with you fiends and friends this latest horrific sea shanty in tune with the terrifying season.

Dedicated to Stephen King and Anne Rice, “Blood & Dust” congealed together from the furnace of our demon bat on August 31,2021. The damned pirate captain—Antoine Valterre, threatened us with life eternal if we didn’t flap this blood sucker to life. May you never find yourself alone with this soulless sailor…on a swamp island…in the dark.

Upon completing this fang-tastic work, we endured a little blood loss. With our cursed vampire—Antoine Valterre, in his debut on HWA Halloween Haunts, we present “Blood & Dust”.

For those foolish to reach out, we will DEDICATE our future and most terrifying “Dweller of the Dark” narration to you (PANDORA)! And a SPECIAL GIFT for the most horrific comment! Comment below or email membership@horror.org with the subject title HH Contest Entry for a chance to win.

The Pirate slaughtered the captain’s maid;

And her broken heart rotted holding the blade.

He sailed for Lafitte’s treasure, the golden stack;

No murdering man of his crew ever came back.

And the wind and waves drifted sombre and black.

Curious hands desecrated the graves of the undead;

Till they found a silver coffin to their dread.

Fascination became terror when they opened the lid,

Eyes fluorescent and fangs sanguine that box had hid.

And a demon bat crawled from the dust inside

And the strangers shrieked and screamed and pleaded as they died.

(A vampire’s thirst is a deadly thing.)-JL

Full narration by author and one creepy bat for you to sink your fangs into.

Our next Halloween scare creeps to us from our collaborator and protégé’ Julian Machen. We present one more creeper poem that has inspired our latest novel. “The Spider” will ascend in November 2021. May your skin crawl with this one!

Creeping, crawling through the night,

What wicked tangled web you weave

When you practice to deceive?

In what darkened cave or labyrinth thy terrifying form lies

Watching, waiting, lurking, with fangs to suck the life from thine eyes?

On what ghostly strand did you devilishly descend?

With taloned grasp did you clasp to kill, to feed then ascend?

What diabolically dark conjure created the covering of your heart?

And when thy heart drummed its horrid beat, dreadful the writhing of its legs and

The gnashing of its teeth?

Is that the roar of thunder in your dark home? Is that the chill of Death on drops of glistening rain?

Or was it the blast of fire in my fevered brain?

Were thou gifted with the spider’s bite?

See above lightning spins its own web in this storm,

Creator in pride did you praise this creature of trickery and deceit?

Did you who made the fly and birth the butterfly cherish in this feat?

Creeping, crawling through the night,

What wicked tangled web you weave

When you practice to deceive? –JM

Full narration by Jeffrey LeBlanc with a creeping spider for your enjoyment. Not for the faint of heart!

“The Spider” By Julian Machen (Narrated By Jeffrey LeBlanc)

Jeffrey LeBlanc, the “Dweller of the Dark”, was raised along the bayous and swamps obsessed by tales of science 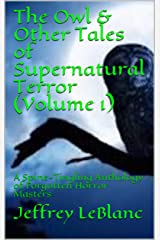 fiction, fantasy, and horror. Now secluded in the shadow of Blood Mountain, he continues to write as a beast. Jeff considers himself a child of the great horror sorcerers Richard Matheson, H.P. Lovecraft, Anne Rice, Stephen King, Edgar Allan Poe, and many more. How else do you explain his driving, furnaced fury to write horror with that kind of madness?

Since “The Devil of Black Bayou” was first unleashed on Authonomy in 2010, Jeff has written thousands of short stories, several anthologies, collections, and novels. He has several new ones ready to be published.

Devil be damned, if he didn’t let the fur fly to bring out Max Faucheaux’s inner beast, Euryale’s divine snake, and a fiendish owl, during a voyage from the North Sea back to Texas in July 2010. Riding right over Titanic’s final resting place triggered the depths of his dark imagination to bring a cursed pirate vampire to life. Also, in truth, to take his mind off seasickness crossing the North Sea and Atlantic. All the while his vessel, New Venture, raced to beat another hurricane to port.

“The Devil of Black Bayou” was born on darkest seas in 2010. Jeff took a chance and placed it on Harper Collin’s Authonomy site. Strangely the novel sky-rocketed up to the 11th position out of 10,000 writers on the site. A spark turned into an inferno to bring more creations to life— “The Masque of Death (Written prior to COVID-19 and actually having to wear masks!!)”, “Wings of the Seraph”, “Shadows, Ghosts of the Moonlight”, “Of Wolf & Man”, “The Mariner of Caminada Pass”, “Wolves, Wings, & Other Things”.

His most recent work is a novella titled “Island of the Giant Snail”, two intense novels titled “Hell’s Forge”, and “The Spider” a collaboration with Julian Machen. Beyond his anthology titled “The Owl & Other Tales of Supernatural Terror (Volume 1)”, Jeff is putting another anthology out soon titled “And the Sea Will Tell”. It’s various horror stories with an ocean theme.

Jeffrey LeBlanc’s “Dweller of the Dark” is a channel and web page on YouTube, Rumble, Word Press, and etc. He created the channel with his wife Katina. The driving force of the channel is to honor the yellowed and blackened bones of many forgotten horror masters.

To date he has had three honorable mentions with Chris Morey’s website Dark Regions for story contests. (Black Labyrinth, Survive the Night, etc.). Lycan Valley Publishers out of Canada had his “Shadows, Ghosts of the Moonlight” in final deliberations for publication. For now, he’s stretching his claws with Cloven Hoof Publishers.

Currently, while cursing up a storm at Hurricane Ida, he has been treating patients and chain sawing trees…or was that the other way around? Jeff has had some time to write and reflect on life due to COVID-19, Delta, and etc. ban on travel. While missing his opportunity to get scorched on the Red Sea in 130-degree temperatures or freezing to death on his flight back across the Arctic Circle he continues writing and hiking. For now, he is between the bayou and Blood Mountain howling away. Secluded in his castle away from the sea, Jeff is writing away with his beautiful wife and artist, Katina LeBlanc. But he just heard a crash and better check on their mischievous collection of bearded dragons-Ragnar, Ruby, John Wick, Kayda, Pac Man and King. Plus, some cool turtles with rock star names.

On FIVERR we raise seven kinds of Hell!

YouTube/BitChute/Rumble: Dweller of the Dark

(Where the Wolf Dwells) https://www.amazon.com/kindle-vella/story/B098XPYP46