Halloween Haunts: A Fiend is Born by Gaby Triana

As a child born to Cuban exiles in 1971, Halloween wasn’t a major holiday in our household for a while, since it wasn’t celebrated in Cuba. Once my parents recognized they were never going home to Havana, however, that things were never “going back to normal” as long as Fidel Castro was in power, they figured they may as well settle into their new home and become full-blown Americans with full-blown American-born kids. We spoke mostly English in the house. This was different from other Cuban American households, where parents often insisted their kids speak only Spanish as a way of preserving the language and culture, or maybe as a way of holding on to their paradise lost. Not our house. My mother had attended an American school in Havana, had vacationed extensively in the US with her family, and already spoke English by the time she moved here in 1963, so with eyes on a new future, assimilating to American culture came easy for the family.

By the time my brother and I were born in 1968 and 1971, we were as American as any other family on the block. These weren’t the days of making sure “Latinx culture was well-represented” in all things media. Latinx wasn’t even a term. Neither was Cuban-American. We were, if anything, Hispanic. Nor were they the days of celebrating cultural differences. No, these were the days of making sure you fit in (Rudolph, the Red-Nosed Reindeer, anyone?), so my parents made sure we ate American food, watched American TV, listened to American music, and made American friends. And in the spirit of fitting in, celebrated new holidays as well. I’ll never forget the day my mother brought home an enormous pumpkin, along with a set of three cardboard decorations to tape—yes, tape—to the front windows. A ghost, a cat, and a jack-o-lantern. Fancy! She didn’t have to teach us how to carve. Just buying the pumpkin was enough. My brother and I already knew what to do and instinctively took to carving a creepy face into that gourd like we’d seen done every year in the CBS special, “It’s the Great Pumpkin, Charlie Brown.” Every October, we’d ceremoniously break out that set of cardboard cutouts, too, with the same fervor as we would our fake Christmas tree in December. It was time!

Halloween didn’t remain meager for long, however. Because my birthday fell on October 12th, I started getting Halloween-themed presents from family, like a plastic Holly Hobby mask, abridged versions of Edgar Allan Poe stories for kids, or my favorite gift of that decade—an 1975 LP called “Famous Ghost Stories,” a collection of 10 recordings of classics such as “The Tell-Tale Heart” and “The Hitchhiker” narrated by voice actor, Wade Denning. It was this record, now worn around the edges (but still in great shape) that fostered my love for ghost stories, such as “The Legend of Sleepy Hollow” by Washington Irving, my interest in Vlad, the Impaler (who I researched in 3rd grade until my teacher learned the book illustrations contained dismembered bodies and took it away), and all things horror. Yes, I was Wednesday Addams. To this day, I still listen to that old record every October filled with melancholy and nostalgia. I still go down the rabbit hole of creepy research, and tales of horror still fill me with delight.

I started having Halloween-themed birthday parties, insisting we decorate with orange and black crepe paper, listen to Monster Mash, and play Bobbing for Apples with my friends who were delighted to stick their painted faces into a water-filled mop bucket rather than play Pin-the-Tail-on-the-Donkey for the umpteenth time (30 years later, I would do this correctly with a galvanized tin for my own kids’ birthday parties). I started dressing up as a black cat, or a mummy (I insisted this be done “the right way” and made my mother sew yards and yards of long white fabric to wind around me), but never a princess or anything in pink. It had to be a scary costume—anything else was un-Halloween. My brother, our friends, and I would trick-or-treat around our Miami neighborhood at International Gardens (supervised, because…Hispanic moms), wishing it was twenty degrees cooler but loving the change in temperature just the same (back then, October nights were actually in the mid-70s, unlike now).

Yes, a monster was born, one who’d skip Sweet Valley High books and go straight for Stephen King and Anne Rice. One who’d watch The Exorcist and The Omen before she was twelve. Once I grew up and got married, Halloween décor became a bigger deal. I had free reign, nobody to tell me it was “too much.” My brother and I threw elaborate Halloween parties for our friends. We’d celebrate Halloween at Fort Wilderness in Disney World or attend Campus Life Haunted House at the FIU fairgrounds. We held pumpkin-carving and costume contests. As a teacher, I made sure every Hispanic or Haitian student of mine who’d never done such a thing before got to carve, listen to my old scary-story record, dress up and have fun. My students all read and analyzed “The Legend of Sleepy Hollow.” When my own kids were born, two of them in October as well, the tradition of Halloween-themed parties continued, and to this day, I’m told by kids who’ve grown up that their best memories of Halloween were at my house during these parties.

Today, my husband and I love to decorate the house, and even when we try to “keep it simple,” we can’t. We will always be extra. We will always have 3D projected ghosts in our front windows. We will always have a ghost floating in our pool. We will always do a new display every year. Go big or go home. We take trips to experience the change in leaves up north. We revel in the light displays at Fort Wilderness still, and we read scary books and watch bloody frightening movies. Halloween is a full-scale event that begins in early September in our house, and the only reason I put it all away every November instead of leaving it up year-round is so I can experience the fun of bringing it back out every Fall again. Halloween will always be a part of my life. Maybe I’m trying to relive my awesome childhood, or maybe I just love how it evolves over the years, but my insides still quiver with giddiness every time I see the Spirit Halloween go up, Michaels shelves fill with gothic décor, or HomeGoods display their new creepy home furnishings. My gel manicure is Nightmare Before Christmas-themed, my wardrobe is black and orange every October, our trips are now to Halloween Horror Nights and Howl-O-Scream, and my family gets to have pizza skulls, caramel apples, and homemade apple cider donuts every autumn.

Yes, Halloween runs through my veins and always will. When I’m old and gray, even if trick-or-treating becomes a thing of the past, you’ll still find me on the front porch, dressed as Madame Leota, handing out candy, telling kids their costumes look great, holding pumpkin-carving contests and dinner parties under a dozen floating candles by the Halloween tree. When else can you delve into the darker side of your soul and not get judged for it? When else can we skip with skeletons and dance with death under a full harvest moon? Only when the veil is thinnest. Only at this most delightful time of year. Only in October. Happy Halloween, fiends. 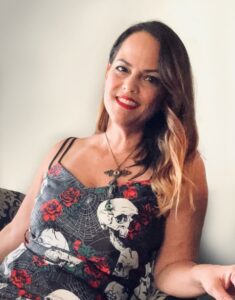 GABY TRIANA is the bestselling author of 21 novels for adults and teens, including Moon Child,

the Haunted Florida series (Island of Bones, River of Ghosts, City of Spells), Cakespell, Wake the Hollow, Summer of Yesterday, and Paradise Island: A Sam and Colby Story. Her short stories have appeared in Don’t Turn Out the Lights: A Tribute Anthology to Alvin Schwartz’s Scary Stories to Tell in the Dark, Classic Monsters Unleashed, A Conjuring for All Seasons, and Weird Tales Magazine (Issue #365). LITERALLY DEAD: Tales of Halloween Hauntings, is her first edited anthology.