A Point of Pride: Interview with Robert Perez 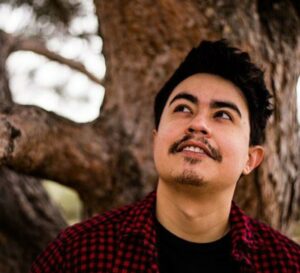 Robert Perez sleeps at the bottom of the ocean. Urban legend whispers that the writer can be summoned into your dreams if you read his work to a jack-o-lantern. You can find his poems and stories in the Horror Writers Association Poetry Showcase Volumes II, III, IV (Special Mention), and V, The Literary Hatchet #13 & #14, Deadlights Magazine #1, Five Minutes at Hotel Stormcove, and Community of Magic Pens. He is currently working on obtaining a master’s degree in counseling psychology at the University of Colorado Denver. Follow @_TheLeader on twitter to keep up with future projects.

I started writing when I was seven years old. My second-grade teacher introduced the class to the Bailey School Kids books by Marcia T. Jones and Debbie Dadey, a supernatural series that includes titles such as “Ghosts Don’t Eat Potato Chips.” Inspired by those books I wrote and illustrated my own mini horror book about a hotel run by aliens. Around that time I was also introduced to Pokemon, my Dad would let me use his computer to write my own Pokemon stories where I was the main character.

One of my earliest memories is of looking at an inflatable ghost Halloween decoration. I was always a spooky kid, and my passion for horror has remained a constant aspect of my life. In kindergarten, my class carved a jack-o-lantern and we each took turns scooping out the orange guts. I kept the goop on my hands and pretended to be a monster, eventually rubbing it into my eye by accident and I had to go to the doctor to have it removed; and during the whole ordeal, I was so disappointed that I was missing the rest of the day’s Halloween activities. I would also wander the shelves of horror movies at the video rental stores and usually watch these by myself.

Absolutely! I know that I have to be the change I want to see in the world. I’d say that most of my stories have LGBTQ characters. As a gay Hispanic author, it’s my mission to increase representation with my art. One of my stories that I’m most proud of is a romance story with a hint of the supernatural called “Love in the Library” which appeared in the anthology Community of Magic Pens, and was also republished. The story received good reviews, and the entire thing is just wild to me because growing up I used to yearn for stories that I could see myself in and now here I am putting that out into the world and people are not only reading my work but loving it. It’s surreal and I’m very thankful. I want my portrayals of love to make people suffer with beauty.

As my lifetime of work grows I reflect back on recurrent themes that have become characteristic of my aesthetic. My work deals with aspects of identity, art, the act of creation, religion, iconography, and deification. Horror is so many things, a mirror, inevitability, consequence, the unknown; it’s intrinsic to the human condition.

Horror has always been at the forefront of pushing boundaries and challenging traditions. It feels like a special time to be an LGBTQ creator. I love seeing submission calls that explicitly state LGBTQ and POC writers are welcome and encouraged to submit. The multiculturalism that is alchemizing the zeitgeist has been long overdue. It’s very exciting.

I feel like horror has been a home for LGBTQ people for a long time. We’ve been sublimating our suffering and experiences being “the other” into art for decades. Right now, The Nightmare on Elm Street 2: Freddy’s Revenge (1984), and The Lost Boys (1987), come to mind, to the more current evolution of representation like Midnight Kiss (2019). Also, in high school when I started reading Anne Rice and was whisked away by her beautiful queer vampires- how could I not mention my fictional adoptive mother of horror? May she rest in peace, that wonderful angel whose art was so impactful on my life.

Anne Rice’s characters live in my heart, Louis and David specifically are my favorites. I’m also very fond of Whitley Striber’s Miriam Blaylock from The Hunger.

Hailey Piper just won a Bram Stoker award for her book Queen of Teeth! I’d also recommend Clive Barker, whose work has also been transformative for me as an artist. The new Chucky series is also terrific and very gay- thanks Don Mancini!

I think part of the evolution of the horror genre is the inclusion of trigger warnings. Recently I felt some hesitation sharing my work with certain people in my life because I’m aware of their struggles and trauma. A trigger warning communicates a respect for their real pain and lets the reader decide if they are ready to search for catharsis in the darkness of your art.

The arch of history bends toward progress. Study the past to enrich your future.