A Point of Pride: Interview with Norman Prentiss 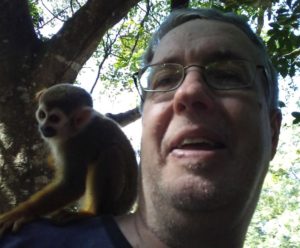 Norman Prentiss is the author of Odd Adventures with your Other Father, Life in a Haunted House, and The Apocalypse-a-Day Desk Calendar. He won a Bram Stoker Award for his first book, Invisible Fences. Other publications include The Book of Baby Names, Four Legs in the Morning, The Fleshless Man, The Halloween Children (with Brian James Freeman) and The Narrator (with Michael McBride), with story appearances in Dark Screams, Postscripts, Black Static, Four Halloweens, Blood Lite 3, Best Horror of the Year, The Year’s Best Dark Fantasy and Horror, and five editions of the Shivers anthology series. Visit him online at normanprentiss.com.

I was reading Edgar Allan Poe in grade school, and I got there through my love of horror movies broadcast on TV. I was reading horror comics at the same time, like House of Mystery and House of Secrets, then Creepy and Eerie a few years later. I loved the anthology format of horror comics, which I also appreciated in Twilight Zone episodes, and I sought out stories by that show’s writers and their contemporaries. I distinctly remember a seventh grade English teacher telling me to “stop reading that junk, ” referring to my latest Robert Bloch discovery, and recommending a historical novel by Leon Uris instead. I stayed with the Bloch.

Horror stories always struck me as sardonic fun, and a good fit for my morbid sense of humor. The genre offers a great introduction to storytelling, since pace and atmosphere are so important, and the surprise endings of so many Twilight Zone or EC Comics-style stories made me think like a writer, trying to guess where a story was headed.

Later in life I realized my youthful attraction to horror also connected to my awkward, mostly-repressed queer identity. The protagonists of horror stories might be bookish nerds, loners, outsiders. And the monsters, too (well, maybe not the bookish part, except for Shelley’s creature). That idea of otherness resonates with a lot of gay youth, I think, especially when I was growing up.

I’d spent a long time away from writing fiction, with eras in academia and in poetry. When I returned to fiction, more LGBTQ content was a definite goal for my writing. That meant some stories with specifically gay content, as in my mini-collection Queer Panics, and my first novel is a gay roadtrip adventure where a young male couple fights homophobia and monsters, Odd Adventures with your Other Father. That book’s my favorite of everything I’ve written, and the sequel, Haunted Attractions with your Other Father*, should be out before the end of the year.The artwork is by fellow HWA member Lynne Hansen, and I love how she captures the essence of my books!
*Cover reveal!

I think I’ve learned the most from the hesitant readers — the ones who say “Why?” or “Ew” when you tell them you write horror. Fighting against that mindset has helped me to understand that horror, aside from being a valid genre, is often literary, and presents a useful way of looking at the world. I’m mostly a good-natured and optimistic person, but my sensibility as a writer is drawn to things that are unusual or broken, because that seems both interesting and more “true” to me.

Well there are a lot of gay characters now, and it’s a wonderful trend. When I started writing Odd Adventures, I was thinking my mainstream queer/quirky adventure might be ahead of its time. But I couldn’t begrudge society — or publishing, or horror — for catching up. It was a pleasant surprise, from the drafting to final publication phase, to revise a character’s statement about marriage equality to reflect positive changes in US law.

So I think we’ve come a long way from the stereotypes of earlier fiction, or the hidden or closeted gay characters I had to hunt for or transform to find representation in earlier works. I think the trend will continue, because more variety in characters makes for more interesting stories to tell.

That’s a tricky one to answer, since whenever I think about favorites, meaning all-time favorites, that’s often stuff I remember from my formative years. And there weren’t many or even any gay characters I was aware of in those days. I ended up translating some characters — Larry Talbot in the Wolfman as an allegory of a closeted gay man, etc. — and those “versions ” of the characters became important to me, regardless of what an author or filmmaker actually intended.

The thing I always say is, Don’t rush to publish. My own detours into poetry and academic writing kept my early fictions from seeing the light of day, and I’m grateful for that, since my voice is different now — changed by my detours into academic writing and poetry, by my life experiences. Keep writing until you learn to recognize a story that “sounds like you, ” and you’ll be happiest with what gets published.