A Point of Pride: Interview with Jose Nateras 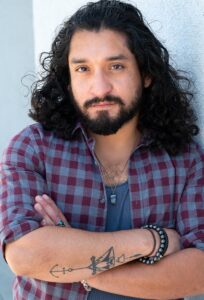 Jose Nateras is an L.A.-based Writer and Filmmaker from Chicago. An actor, screenwriter, playwright, journalist and more, Jose prides himself on his versatility as an artist.

Jose is a graduate of Loyola University Chicago, has his MFA in Writing from The School of the Art Institute of Chicago (SAIC), and is also a freelance journalist, a published novelist, and screenwriter/playwright. One of his feature-length screenplays, “Zero Feet Away” was recently a finalist in the screenwriting competitions of the NOLA Horror Film Festival, the Los Angeles Crime and Horror Film Festival, the Lit Scares International Horror Festival, and was included on the 2021 Bloodlist, being optioned by Village Roadshow/Brillstein Entertainment Partners while another of his screenplays, “Departing Seniors,” was selected for The Epiphany Project by Mass Epiphany Studios and was an official selection for the Oregon Scream Week Horror Film Festival. His debut novel TESTAMENT was published by Ninestar Press in December 2019/January 2020.

I’ve always been a writer and a storyteller. As a child, I would write my own versions of books. When I was four or five, I “self-published” a blatant rip-off of If You Give a Mouse a Cookie and from then on was taking inspiration from things like the covers of Goosebump novels to write my own stories.

I think as a child I was always drawn to darker and spookier things. I used to love Scooby-Doo and Halloween episodes of my favorite shows. But I was also easily frightened by a lot of things. The more I was exposed to the horror genre I was able to move past that state of fear and I noticed that throughout the genre, characters were forced to move past their fear in order to survive and being doing so, they came out the other side having accomplished something great; discovering new strengths, conquering their demons, saving their loved ones etc.. Even as a kid I found that inspiring.

I absolutely make an effort to include LGBTQ material in my writing. By material, I mostly mean central protagonists who are LGBTQ+. My goal is to tell stories featuring people like myself, because ultimately that wasn’t something I saw a lot of growing up. At least not in ways that weren’t stereotypical or disrespectful. I’m interested in showing the humanity of LGBTQ+ people; our resilience, our strength. So much of the queer experience is steeped in fear. As young queer people, the ever-present fear of being outed and the often more horrifying realization that you yourself are something the world is telling you is evil and wrong… the truth that you might be the thing that society says is perverse and dangerous is a scary experience that queer folks trying to survive in a heteronormative world have to contend with. By sharing the nature of that experience through the horror genre, I really believe we can help others understand the impact of not only homophobia, but how the way society ‘others’ people is so harmful.

Writing horror has taught me that there can be something positive even in the darkest, scariest, and hardest experiences and thoughts. The act of creation is literally a positive force. You are creating something new in a world where forces are actively destroying things every day. I’ve found that through writing, we can have an impact, no matter how small that impact might be, that can touch and affect people beyond ourselves. By sharing my own fears and how I process them through my work, I can help others do the same. I think that’s awesome.

Over the years I have seen the horror genre continue to evolve in some exciting ways. I think overall, people are starting to pay more attention to how the diverse the genre can and should be. Not just in terms of representation, but in terms of the sheer variety of kinds of stories the genre can hold. All of the different types of books and movies that can fit under the horror umbrella and how it can cross pollinate with different genres is exciting. And of course, I think the improved diversity in terms of BIPOC and LGBTQ+ people is also a wonderful step in the right direction, though there is a long way to go on that front.

I feel like in the past the LGBTQ+ community has been a bit sidelined in the genre. The queer community is oftened ‘othered’ and as such falls into the camp of people/forces to be vilified by the genre. People fear what they don’t understand and what they can’t easily categorize and for a long time, the cis-hetero mainstream media, including the creators behind the horror genre have failed to understand the queer community. So they were afraid of us and that made us fodder for the horror genre. We were either the monsters (Carmilla, Silence of the Lambs, etc…) or we became jokes and disparaging examples of weakness that characters have to distance themselves from, prove their not, or actively fight against.

Belle from “Fright Night: Part 2” (1988) stands out. It’s the sequel to the O.G. “Fright Night” and Belle is this androgynous roller skating vampire. Bo, played by Milo Ventimiglia in Wes Craven’s “Cursed” (2005), specifically the directors cut. Mitch in “Paranorman” (2012). Definitely Jasmine Savoy Brown’s character in the latest ‘Scream’. The list goes on and on.

I mean, Clive Barker is a queer horror icon for a reason.

My biggest piece of advice for horror authors today is to actively think about what they’re writing. It might sound obvious, but as horror writers, we’re afforded the ability to actually consider the nature of fear. Why are we afraid of the things we are afraid of? If we can understand that, as horror authors, our work becomes deeper, it reveals more of the human experience, it can be more entertaining and nuanced, and if done thoroughly, can be an important force for good in the world.

My advice to the LGBTQ+ writers out there, and for all under-represented writers, is to write the sort of stories you would want to read. Write the story that a younger version of you was craving, especially because there are younger versions of you out there right now. As a BIPOC/Latinx (Mexican American) writer, there are so few times I’ve seen myself reflected in the stories that I love. But I know I am not alone in the demographic I belong too. There are thousands of queer latine horror fans who deserve to see themselves represented in the genre. They deserve to have characters like themselves centered in the sort of stories they love. Through specificity comes universality. So, trust that by telling a story that is specific and purposeful, it will find it’s audience.