A Point of Pride: Interview with James Bennett 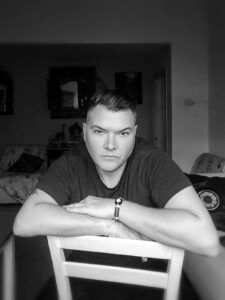 James Bennett is a British writer raised in Sussex and South Africa. His travels have furnished him with an abiding love of diverse cultures, history, and mythology. His short fiction has appeared internationally and his debut novel ‘Chasing Embers’ was shortlisted for Best Newcomer at the British Fantasy Awards 2017.

His latest fiction can be found in the well-received ‘The Book of Queer Saints’, BFS Horizons and The Dark magazine. He also has a story in ‘There’s More of Us Than You Know’, a new anthology from Bloodrites Books in support of The Trevor Project, the world’s largest suicide prevention and crisis intervention organisation for LGBTQ+ youth.

In addition to this, James’s Arthurian novellete, ‘The Dust of the Red Rose Knight’ is part of Books on the Hill’s Kickstarter, a campaign to bring dyslexic-friendly books to adults and featuring such luminaries as Bernard Cornwell, Peter James and Gareth Powell.

The details can be found here:

James lives in Spain where he’s currently working on a new novel.

Typically, other books and TV shows. I used to make up stories and after reading ‘The Hobbit’ as an eight-year-old, I decided to try to write my own stories. I’ve been writing pretty much ever since.

I was traumatized as a six-year-old by ‘Invasion of the Body Snatchers’ (the 70s remake). I think it still exerts a pull on me today in terms of its transformations and alienness. Back then, I got interested in witches and ghosts. Facing the darkness, I guess. But it was Stephen King who really got me exploring it as an early teen. I liked his blend of the dark fantastical with the genre. Most of my stuff is a combination of Fantasy and Horror. Mythology can get pretty dark too.

Absolutely. I see all my books and stories as inherently queer, even if the queerness isn’t explicit. That’s because they’re created by a gay guy and that’s always going to be my perspective.

At the moment, I’m working on a batch of stories that deal with various element of gay male lived experience – coming out, relationships, loss, abuse, our erasure from history and myth – as you don’t often see those in these genres. There’s sometimes a sense that queer trauma isn’t welcome, and all rep has to be this apotheosing, ‘normalising’ exercise. I honestly find it quite restrictive. I reflect that in my work.

My current challenge is to write about these less comfortable/more realistic elements in a way that readers might find engaging, fun, and hopefully connect with them on an emotional level. With 8 stories placed in the past year, so far, so good! Of course, Horror seemed the best forum to attempt this.

Mostly, it’s taught me to face my fears. Even as a teen, reading King, Herbert, Poppy Z.Brite, Barker etc. I learnt a lot about being an adult and the world out there, I think. The latter two authors got me thinking about my sexuality and served as a beacon of hope. You could see them writing books, having successful careers. Queer visibility matters a lot more than surface representation, in my opinion. Anyone can write queer characters, but you feel less alone when you see queer artists doing what you want to do and thriving.

Lately, writing Horror is a process of confronting past traumas and experiences. I’m reckoning with them in a positive, progressive way by turning them into art. Even though my most recent work is my darkest to date, I feel the healthiest I ever have, both as a writer and a person. That’s Horror, for me. It’s therapeutic. It’s catharsis.

To my mind, there’s been a seismic shift in all the speculative genres, Horror included. Horror, however, has always felt like a welcoming space for me personally. Someone recently told me that’s because Fantasy is about conforming whereas Horror is the exact opposite. I liked that! And it’s true I feel at home in the Horror community in general, so to see it spread its shadowy wings to embrace queer voices in the last few years has been the best thing I’ve seen happen in genre, hands down. I’m delighted to see these writers making waves, honoured to feel part of it, and I hope it continues long into the future. Diversity is the lifeblood of art.

Well, I have to say it wasn’t great up until a few years back. We all know how we’ve been portrayed, mostly through a heteronormative lens and often judgmentally. We’ve been stereotyped, othered or excluded throughout the history of genre, so it’s great to be writing in an era where that’s finally changing.

There are still issues, I think. We’re co-opted a lot and I often feel that the heteronormative gaze doesn’t fully grasp us. We’re either the best friend ‘who just so happens to be gay’, perfect Prince Charming/saintlike figures or we’re hypersexualised freaks. Few seem to get queer culture or that many of us don’t really exist in the same world as everyone else, in terms of our freedoms and rights. There’s a tendency to erase it in the name of convenience, I think, that I find somewhat uncomfortable.

Having said that, I do think the conversation is progressing and the above serves to illustrate the importance of the inclusion of queer voices in their own narratives. You see more and more queer writers starting to get somewhere, so I think representation on the whole is changing for the better. Overall, I’d like to see more acceptance of the fact that there is room for *all* kinds of queer expression, not just the ones deemed ‘positive’, trauma-free and designed for mainstream consumption. Queer survival, let alone success, is the only positive anyone needs.

Where do I start? Frank-N-Furter from the Rocky Horror Picture Show. Tom Cruise in Interview with the Vampire. The Babadook. Will Rabjohns from ‘Sacrament’ by Clive Barker. Trevor in ‘Drawing Blood’ by Poppy Z.Brite.  Jake in the new Chucky show.

Aside from the ones mentioned above, I’d say the queer authors rocking the genre today are Paula Ashe, Eric LaRocca, May Murray, Hailey Piper, Joe Koch, Craig Laurance Gidney, Eric Raglin, George Daniel Lea and Nikki R. Leigh. This is a sample of Horror authors I’ve read recently that are all well worth reading.

Stay true to yourself.

I’d say the same as I’d say to any newbie writer. Keep writing. Become a student of the craft. In addition to that, for LGBTQ writers, I’d say seek out welcoming markets. You can waste a lot of time trying to break into scenes and fandoms that aren’t necessarily ready to accept you. Hopefully, you’ll always be learning. Always make sure you love what you’re doing too as it shows on the page.