A Point of Pride: Interview with April A. Taylor 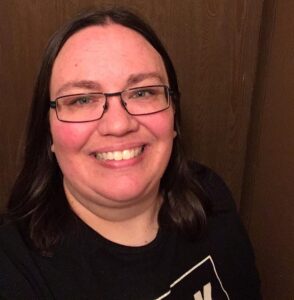 April A. Taylor is an award-winning, #1 best-selling multi-genre author. Her debut horror novel, The Haunting of Cabin Green, was featured on four “Best Horror Books of 2018” lists (PopSugar, Inquisitr, Bored Panda, and Ranker). She has written nine books to date. April lives in Michigan with her huge black cat, Riley. If her life was a cartoon, she’d be Lisa Simpson.

I’d been writing since early childhood, but what inspired me to actually publish my stories was going through a housefire.

The horror genre first drew my attention with the Thriller video when I was quite young. As I got older, I came to understand how much room there was for symbolism within horror, and that really spoke to me.

Usually, yes. What I hope to portray is that LGBTQ+ people are like everyone else. I try not to make any kind of big deal out of the sexuality of my characters. Instead, they’re regular people who have awful things happen to them, and they just happen to be LGBTQ+.

Writing horror has allowed me to develop even more insight into people and why they do the things that they do. It’s easy to see others (and myself) through the lens of having a regular day. What I’m interested in is seeing how they react when something terrible has happened. Do they make rational decisions? Or are they much more likely to panic and make bad choices? Sadly, the latter is most often the case. When it comes down to it, even the best of us can be ruled by our emotions.

Absolutely! I’ve seen the horror genre go from being a rather male-oriented, conservative, non-LGBTQ friendly place to becoming filled with representation. Today’s horror focuses greatly on the negative things going on in the world — as all horror has – but it takes a much more liberal spin on how the world should really work.

We’ve mostly gotten away from depicting LGBTQ characters as shady or bad, and that’s so important. Now, we see LGBTQ characters being the heroes, which is so fantastic. And, even if they are represented as bad, there’s much more of a reason for that. Going forward, I hope to see this trend become even more popular. I’d also really like to see LGBTQ characters simply become characters who just happen to be LGBTQ.

Oh, wow. There are just so, so many, from those who are expressly stated as being LGBTQ to those who were coded as such. Recent books with intriguing LGBTQ characters include The City Beautiful, The Queen of Cicadas, and Red X. I also LOVED the characters in Clive Barker’s Imajica. The representation in modern horror comics has also been fantastic.

Everyone should read Clive Barker. Beyond that, the first name that comes to mind is Mary Shelley, who many think of as having been straight but was actually bisexual. More recently, I’ve really enjoyed Aden Polydoros. And, of course, Eric LaRocca has done some interesting things.

Let your heart bleed onto the page. It doesn’t matter if some people don’t get it. Do what comes naturally and you will find an audience.