A Point of Pride: Interview with Aaron Dries 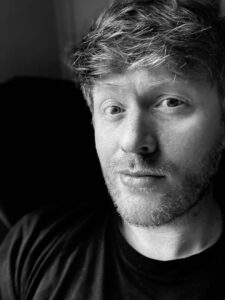 Australia. His novels include the award-winning House of Sighs, The Fallen Boys, A Place for Sinners, Where the Dead Go to Die (with Mark Allan Gunnells), and the novellas The Sound of his Bones Breaking, And the Night Growled Back, and the highly acclaimed Dirty Heads. Cut to Care, released in 2022, is his first collection of short stories. Aaron Dries is one host of the popular podcast, Let the Cat In, also co-founded Elsewhere Productions, and is a member of both the Australasian Horror Writers Association and the Horror Writers Association. His fiction, art, and films have been celebrated domestically and abroad.

I was always a creative kid, and grew up in the middle of nowhere in Australia. We would travel far to get groceries once a fortnight and I’d roam the video store while my parents bought food. But because the video store was so far away from our house, the owners wouldn’t allow us to rent from there. No matter. I’d take a pen and paper and sketch the VHS covers of all the horror movies I longed to see, and then would come home and write/draw comics based on what I thought the movies were about. Over time, the stories bloomed into whole other creative pieces. That’s where my love of writing began. I actually wrote about this quite extensively in my novel from 2021, “DIRTY HEADS: A cosmic coming-of-age novella”, which in addition to being a very personal nostalgia piece, also happens to be very queer.

Even at a very young age, I knew that the genre was out to provoke me, challenge me, frighten me, and to force me to see the world in which I lived in differently. I also found watching horror movies and reading horror books (starting with Goosebumps, then jumping to King, whose Danse Macabre became my guide through my formative teen years) really cathartic. It felt good to be afraid. It relaxed me afterwards. And so many of the stories were those of outsiders. I absolutely related to that.

I include LGBTQ+ material in all of my writing, though it’s no longer something I put too much conscious thought into. It’s simply a reflection of how I see the world. With my first novel, HOUSE OF SIGHS, it was a very conscious thing. I wanted to lure the reader in on something more mainstream and have the book evolve into a distinctly queer survival tale in which our main character ultimately has to run a blood-splattered gauntlet of oppression. The queer perspective is kind of just woven into the fabric of my universes now. And I strongly believe that even when I don’t specifically write about queer characters, my stories are still fundamentally queer. Queerness isn’t exclusively about representation. It can also be an attitude, a sense of caution, a sly celebration, a way of looking at the world from the outside in.

It’s taught me that the most important thing in the world is empathy. Horror is the genre of great empathy – though that empathy is not always rewarded with virtue or survival. I work in the human services sector, almost exclusively with homeless families or women, children, and men experiencing domestic or family violence, and mental health conditions. I’ve seen that the world can be extremely cruel. And hope matters. Horror taught me that. In some way. It truly did. Empathy is an engine and keeps things turning, keeps things sane.

My first novel was published about ten years ago. The genre has certainly changed. The publishing industry has certainly changed, too. I’ve been in solid publishing houses that have folded and gone under. I’ve been burned, no doubt. But through the ups and downs, I’ve also seen the emergence of other voices, minority voices, shining through the ruin. I truly think that this otherness is what’s keeping the publishing houses excited. It feels good to not have to fight so hard to have your voice matter. I used to be terribly afraid of writing worlds that reflect my own. It’s only been over the past three years that my anxiety around this has started to settle. I hope this path continues to be trailblazed. It’s so important that the arts are diverse and personal.

I was raised on coded material – narratives that were queer in subtext but in heavy disguises. And if they weren’t coded, so much of the media I consumed as a kid and into my twenties, really, depicted queers in what would now be deemed (and rightfully so) problematic. Thing is, this was we had for a while there. And part of being starved for representation is that you invest a kind of magic in the little tendrils you’re drip-fed in books and movies. So, there’s a love in my heart for even the ugliest of representation. Thankfully, the genre is evolving. I wish only for queer representation to become more honest. Which also means that I want to see queer characters who are imperfect, or villainous, or might be cowardly. Queers aren’t cute pandas. Representation as idealized versions of ourselves holds no interest to me. Keep it real. But make it our realness.

My favourite LGBTQ character is Will Rabjohns from Clive Barker’s SACRAMENT. Rabjohns is a photographer of endangered species, and his adventures in the wild, as well as San Francisco’s gay community, reflect the novels overarching themes about creation and extinction of all species, and in particular gay men through the AIDS epidemic.

I would strongly recommend readers to check out the work of Mark Allan Gunnells, who again writes with such empathy and humour. David Demchuk’s RED X is one of the great queer texts of the modern age. Bret Easton Ellis’ upcoming novel THE SHARDS is an astounding piece of queer meta-fiction with a distinctly horrific edge. I loved Hailey Piper’s QUEEN OF TEETH. Clive Barker and Poppy Z. Bright, of course. Daphne Du Maurier. Carmen Maria Machado is also such a phenomenal talent. Eric La Rocca. Jewelle Gomez. Dane Figueroa Edidi. The amazing Michael McDowell, who passed way before his time. The list goes on!

As Jack Ketchum often said, write from the wound. Don’t be afraid to go deep. There are many ways to tell a story, but the most effective way to connect with readers is to tell it in a way that only you ever could. That’s how we keep stories bleeding. That’s how we keep them alive.

We’re not perfect. So, write imperfect queer characters. Personally, I love queer villains. You are also allowed to kill your queer characters (my way of saying leave queer hate guilt to others). Remember that you’re amazing. The way you see the world is special and that view of the world expands the world. Create and watch things grow.