Welcome back to “Know a Nominee,” the interview series that puts you squarely between the ears of this year’s Bram Stoker Award nominees. Today’s update features Brett J. Talley, nominated in the category of Superior Achievement in an Anthology for Limbus, Inc. II. 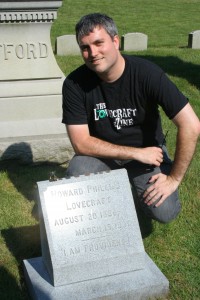 DM: Please describe the genesis for the idea that eventually became the work(s) for which you’ve been nominated. What attracted you most to the project? If nominated in multiple categories, please touch briefly on each.
BT: Anne C. Petty originally came up with the idea that forms the genesis of the Limbus universe. We lost her a couple years ago, but I’d like to think she lives on in Limbus, Inc. II. I had taken part in the first Limbus book, and when Anne asked me to take over for her, I was honored to say yes.

BT: Most challenging was working with the amazing authors that took part in the anthology. I say it was challenging because they are all such legends, and I wasn’t entirely sure I was up to the task. As far as the most rewarding, in addition to helping ensure that all the stories fit within the universe Anne had created, I also wrote the frame story that ties it all together. It’s nice to not only edit a work, but also to take part in the story it tells.

BT: Good horror can do many things. It can entertain. It spurs some of our deepest and darkest emotions. And it is a wonderful vehicle for exploring society’s shortcomings. I think we tackle many of those shortcoming in Limbus, Inc., and we do it in a way that’s not so in-your-face as to not be enjoyable. Over the last few years, unemployment has been a fear far too many people have had to tackle. So too has been the idea that some greater power knows everything there is to know about us and has power we can’t imagine. Limbus tackles all that.

BT: I tend to write without an outline or even an idea of where I’m going to end up. I dive right in, and I fix whatever’s broken on the back end. As far as getting stuck, I find that writing a book is kinda like getting from point A to point B. You gotta just keep putting one foot in front of the other. That’s what I try and do with writing. Sometimes I might only write a sentence or two, but it’s making progress, and eventually the dam breaks.

BT: Keep going, and don’t let anyone tell you that you can’t do it. There is no greater asset than persistence.

BT: Seeing old friends. One thing I love about the horror community is how close-knit it can be. There’s so many great people who are working in horror today.

BT: Hopelessness. It’s one reason I like Lovecraftian fiction so much. The idea that our enemy is too great to overcome, that one day we will fall as a civilization, as a race, that’s scary. One thing I do try and do in all my works, however, is interject a little hope into the fray. Lovecraft might not approve, but I can live with that.

BT: Reading Hal Bodner right now. Guy is a great writer and he is hilarious. As far as new authors, William Holloway is the brightest new light in dark, speculative fiction today. Check him out.

A native of the South, Brett J. Talley received a philosophy and history degree from the University of Alabama before moving to witch-haunted Massachusetts to attend Harvard Law School. When people ask, Brett tells them he writes for fortune and glory. But the truth is the stories in his head simply refuse to stay put. Brett loves every kind of fiction—from horror to literary to historical to sci-fi—as long as there are fantastic characters with a compelling purpose. Since his first novel, That Which Should Not Be, was a Bram Stoker Award finalist, he has contributed to the first Limbus installment, published the sci-fi thriller The Void, numerous short stories, and recently released his post-apocalyptic novel The Reborn as part of JournalStone’s DoubleDown series. His latest, He Who Walks In Shadow, is the sequel to That Which Should Not Be and will be published in May.