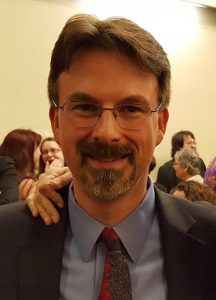 The Horror Writers Association announces James Chambers as the 2016 Silver Hammer Award recipient. Chambers will receive the award at StokerCon 2017 held on the Queen Mary in Long Beach, CA. “I enjoy the work I do for the HWA,” Chambers commented, “and I appreciate the opportunity to pitch in and help out the group and other writers.”

HWA presents the Silver Hammer Award in recognition of extraordinary volunteerism by a member who dedicates valuable time and effort to the organization. The award is determined by HWA’s Board of Trustees. Chambers has a long history of offering his time, services, and industry expertise to the international writers’ organization. He committed a tremendous amount of time to HWA in 2016, then took on a further role as co-chair of 2018 StokerCon. HWA President, Lisa Morton, stated: “I just can’t imagine the HWA without him.”

James Chambers is the author of The Engines of Sacrifice, a collection of four Lovecraftian novellas described by Publisher’s Weekly in a starred-review as “…chillingly evocative….” He has also written the story collection Resurrection House, the dark, urban fantasy novella, Three Chords of Chaos, and the original graphic novel Kolchak the Night Stalker: The Forgotten Lore of Edgar Allan Poe, which is a Bram Stoker Award Finalist this year.

As chair of the Horror Writers Association membership committee, he has the honor of helping new members join the organization and former members return. He also coordinates the New York chapter of the HWA, which holds nights of readings, represents the HWA at local events such as the Brooklyn Book Festival and the New York Comic Con, and provides networking for local authors. His other volunteer efforts have included coordinating Halloween Haunts, the HWA’s Annual Halloween blog celebration, and he serves on the conference committee. His website is www.jameschambersonline.com.